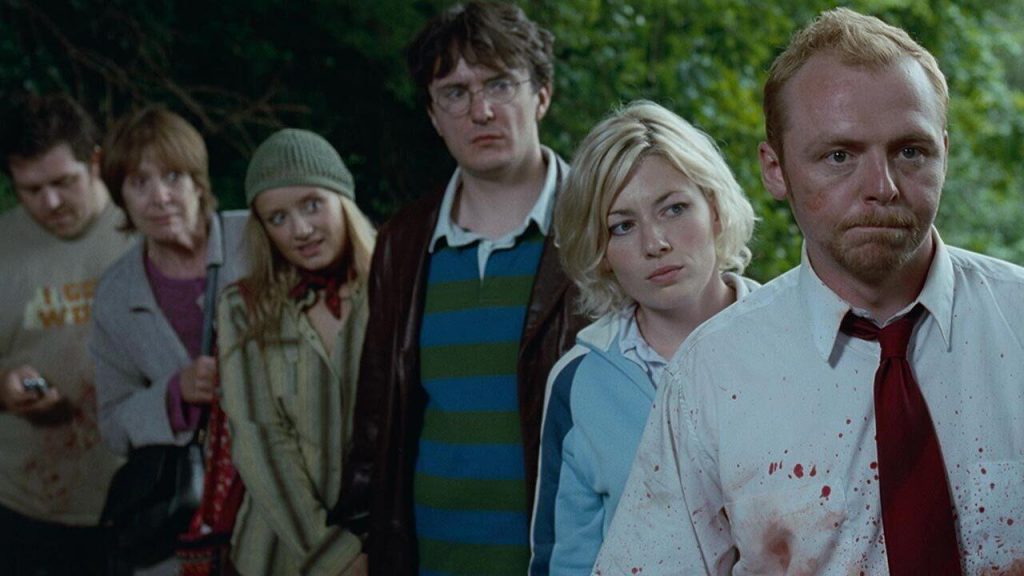 15 Best Zombie Movies Of All Time

The zombie has to be one of the scariest monsters ever created but not so much for its solo efforts as a villain. Aliens, Kaiju, any sort of cosmic being–in terms of pure might and destructive scale–there are plenty of worse offenders. Zombies, however, pose a unique psychological threat. An outbreak would be bleak. Early encounters would most certainly be with people we once knew. That’s disturbing enough, before ever getting into the whole “being eaten alive” deal.

Most of us wouldn’t be able to handle the trauma associated with dispatching a reanimated loved one. Even if we are, surviving a given moment might not be enough. What’s our motivation to move forward despite the sheer hopelessness of the situation? That’s something to ponder. Which is why we believe the best zombie movies, like most horror, utilizes that notion to tell interesting stories about humanity.

Below are the 15 best zombie movies of all time. A difficult list to make for sure, considering the years of content one could sift through. That said, the movies included all bring something valuable to the undead table. Or at the very least, will elicit strong debates from fellow zombie fans.

Note: We’ve included “infected” centered movies as they still reflect the original concept of a zombie being a person (undead or otherwise) that has no will of their own/is a slave to either a person or their impulses. 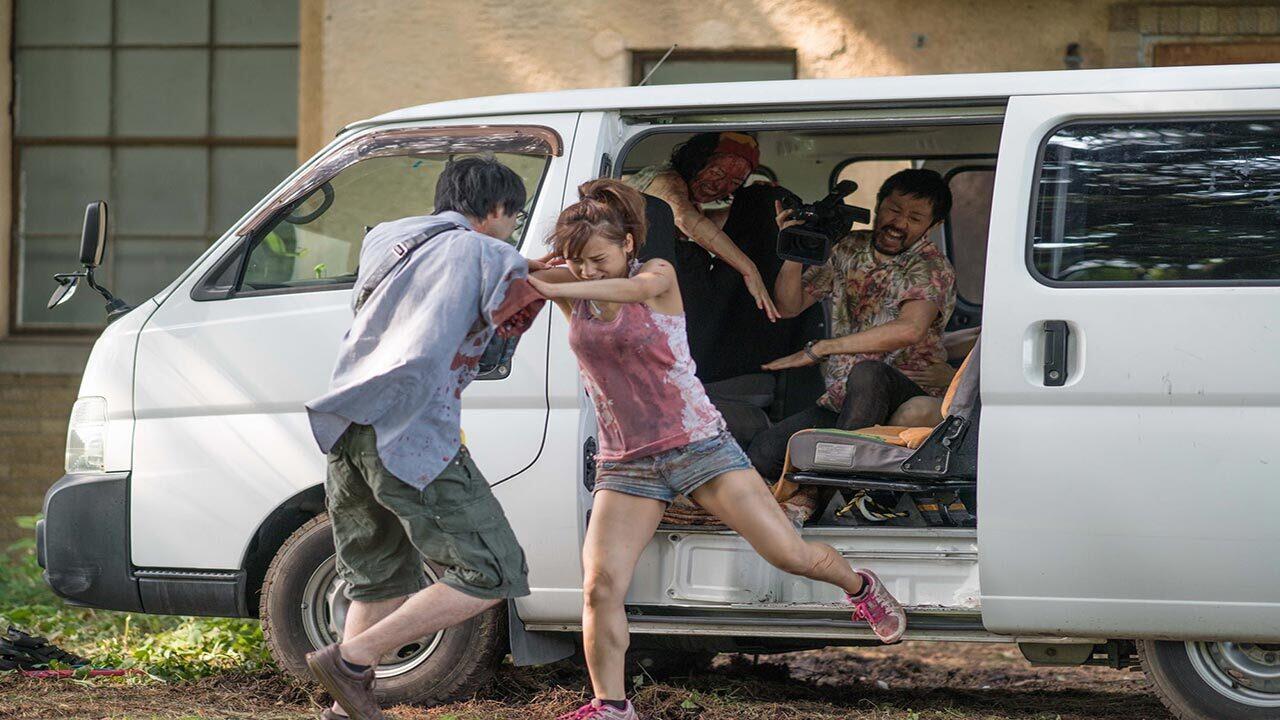 One Cut of the Dead isn’t your typical zombie movie. We won’t spoil why here, only to say that it features a unique premise that allows for all sorts of comedic moments. There’s also a nice family dynamic that shows up in the latter half of its 97-minute run. One Cut of the Dead offers a refreshing spin on the genre while still (in its own way) adhering to some of its staples. The main reason why it isn’t listed higher on the list is because of the true nature of the film’s zombies; when you see it, you’ll understand. 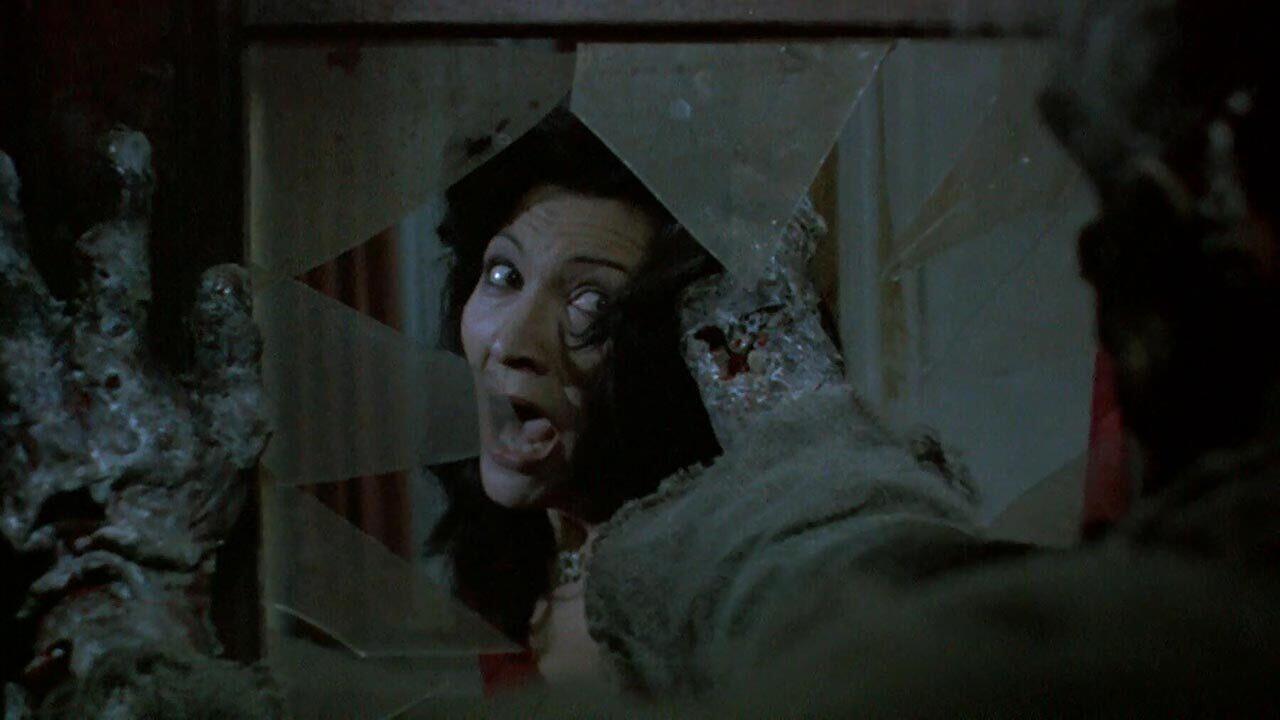 Burial Ground features one of the bleakest apocalyptic scenarios ever. Everything from the intelligent, slow-moving zombies to the unnerving musical score is meant to keep the audience in a state of dread. And it mostly works. Unfortunately, Burial Ground doesn’t quite live up to today’s standards. The practical effects were good for the time–the level of gore is unreal–but the movie’s overall pacing and odd shifts in tone (including a disturbing scene between a mother and son) prevent it from being higher on our list. 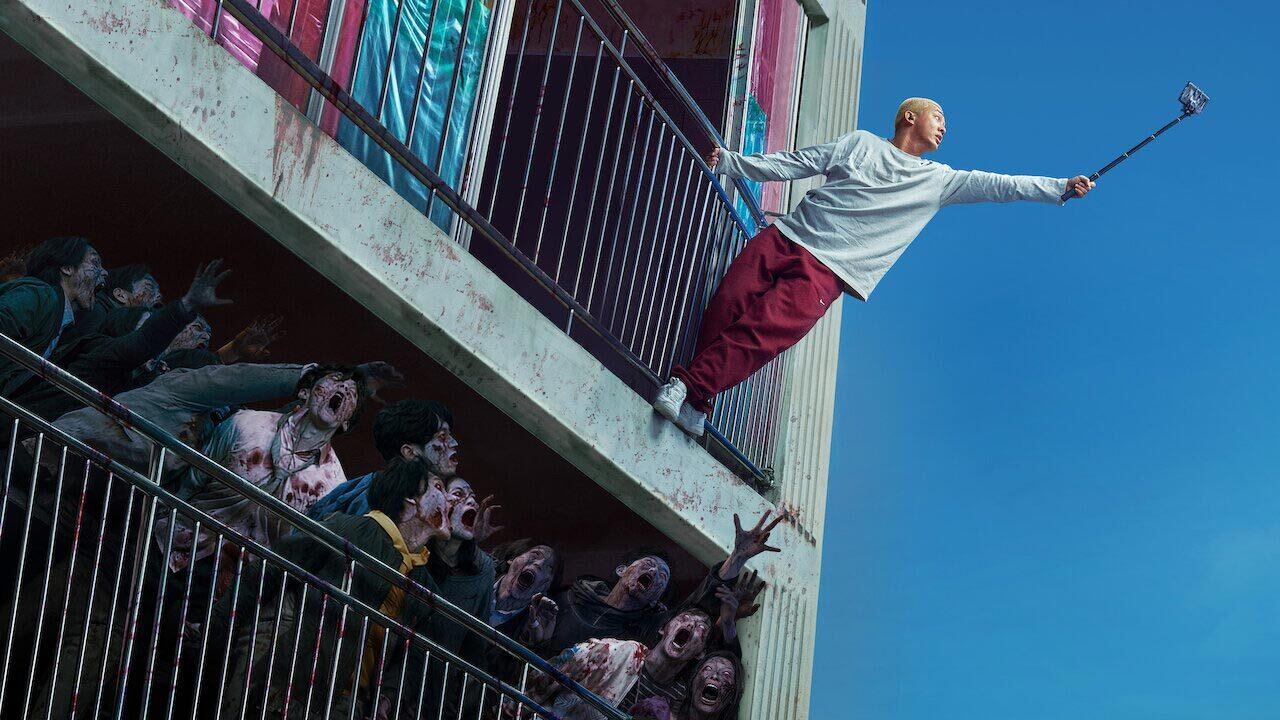 There are plenty of zombie movies that feature a lone survivor in an overrun apartment building. Not many of them are as entertaining as Cho Il-hyung’s #Alive though. Just squeezing past The Night Eats the World, this zombie movie is as comical as it’s frustrating; the lead protagonist often gets in their own way. That said, there is growth here that isn’t often seen in this sub of subgenres. There are also some decent scares, good tonal balance–going from comical to horrifying in a way that doesn’t disrupt things thematically–and characters worth rooting for. 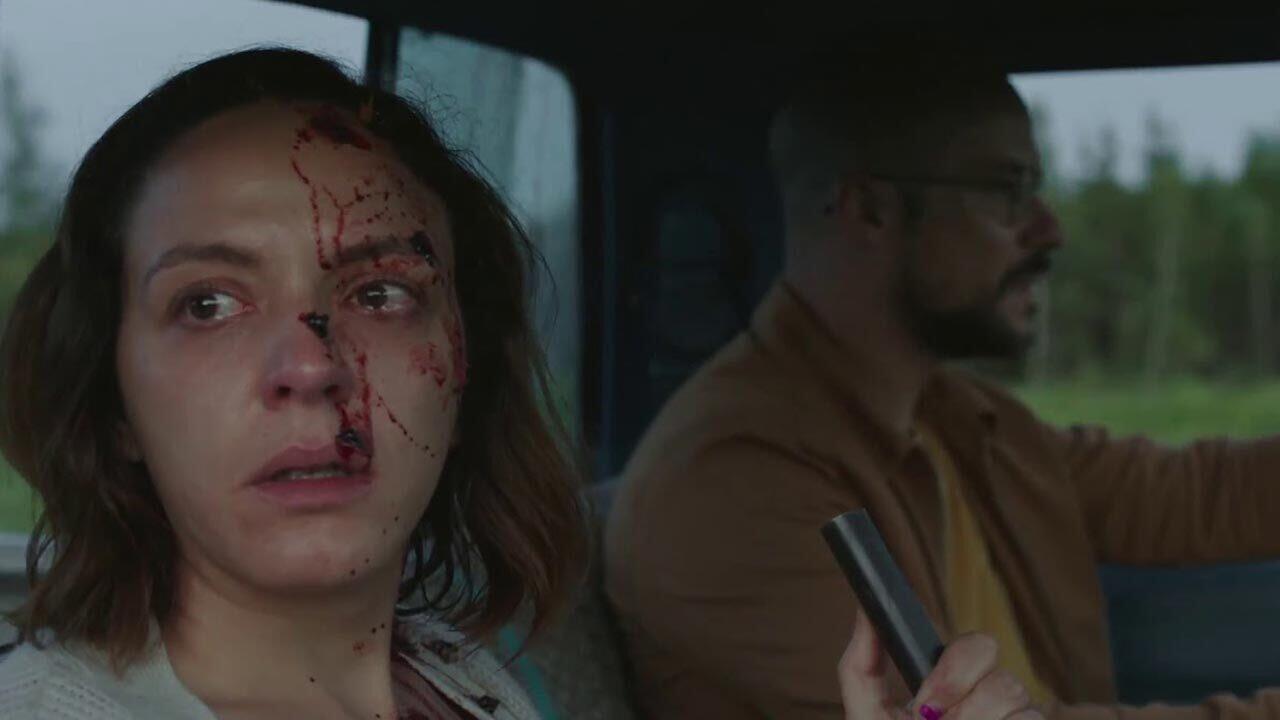 Ravenous (aka Les Affamés) has a minimalist approach to storytelling that works extremely well. Realistic in nature, it’s as if the audience was dropped right in the middle of things. We don’t know what’s going on or what caused the plague. The fact that the zombies are building what appears to be shrines is also perplexing. Essentially, we’re made to feel like the cast of characters who are struggling to survive. This results in an odd/unnerving venture through a zombified Quebec. 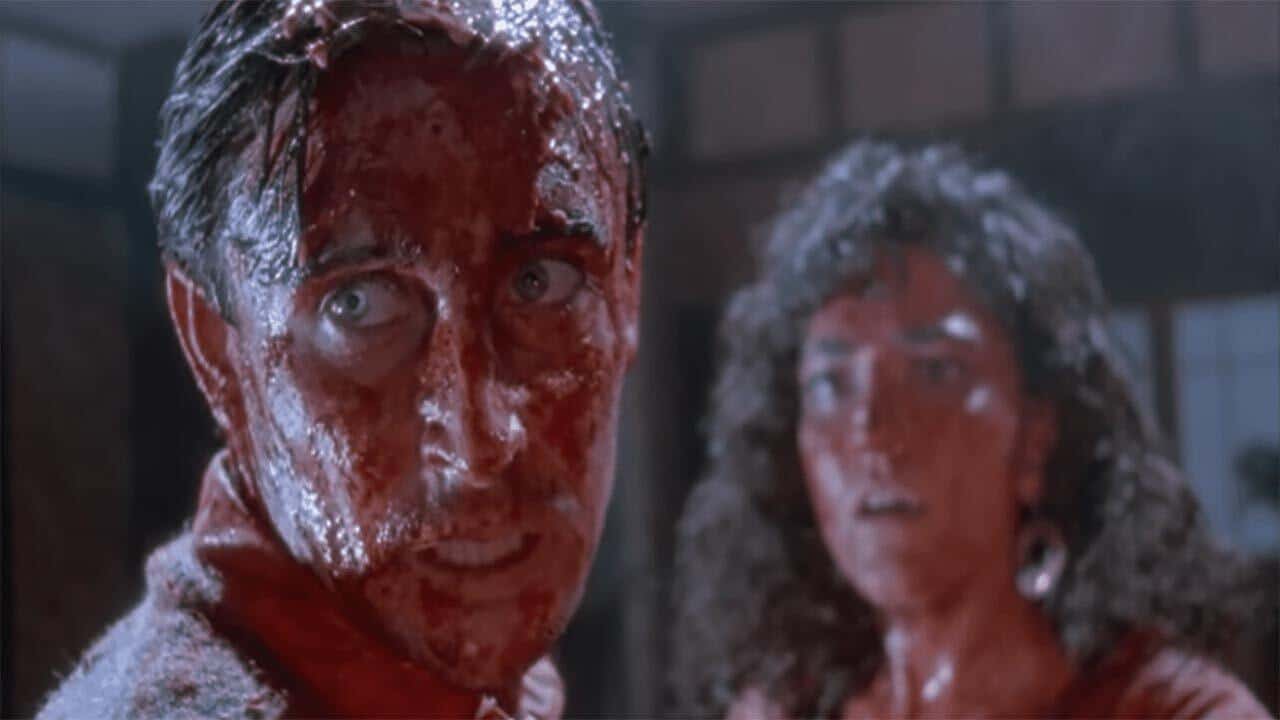 Peter Jackson’s Dead Alive (also known as Braindead) is one of the best zombie-based comedies ever created. It’s also one of the goriest. An unhealthy mother-son dynamic provides the narrative foundation. This holds up the film’s copious amount of gore and silly characters, like a kung-fu priest who “kicks ass for the lord”, that would have otherwise destroyed any semblance of a coherent plot. Dead Alive still provides a unique view on humanity, just heightened to an absurd degree. 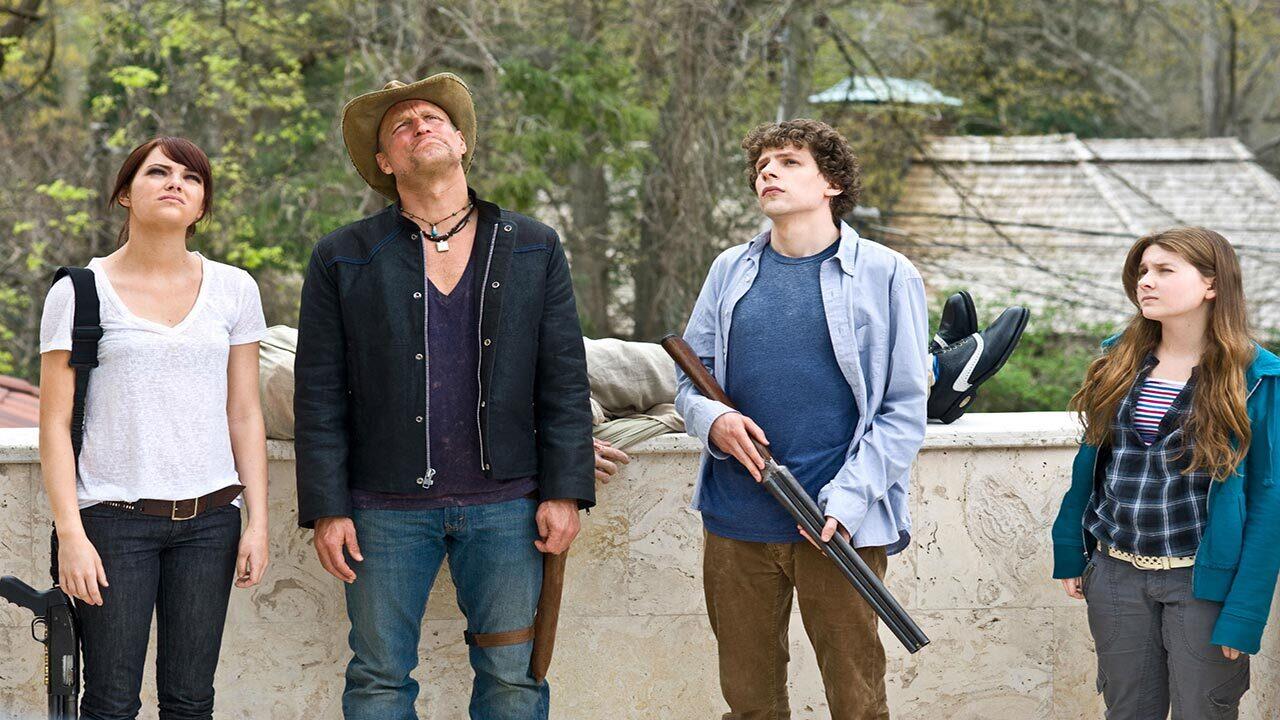 Zombieland is to the zombie genre, what Cabin in the Woods is to horror as a whole. Not only does it poke fun at its staples, but it offers a fantasy of sorts, and it reflects what the people, who say they’d thrive in a zombie apocalypse, think would happen given the opportunity. It’s a fun, comical movie that’s worth being on everyone’s favorite zombie lists; the scene with Bill Murray alone justifies its inclusion. 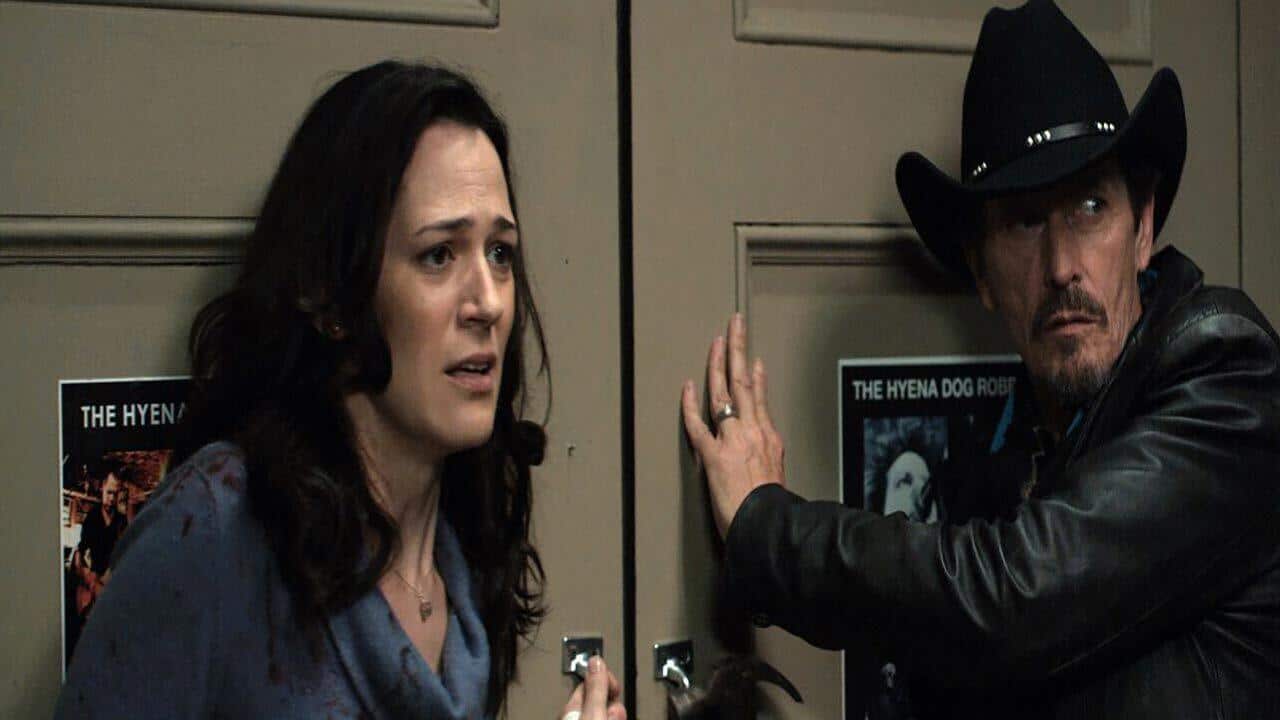 Like the other “infected” movies on this list, Pontypool doesn’t feature the typical zombie. And the ones it does show aren’t on screen very long. The film follows the exploits of a radio personality and his assistant as they listen to reports of what appears to be a series of random attacks. It isn’t long before they find out that these events are taking place all over town, a threat that’s slowly inching its way towards their radio station.

Pontypool’s appeal is based on the unknown, where most of the drama is heard rather than seen. It works surprisingly well, given how great our subconscious is at conjuring up terrifying images. 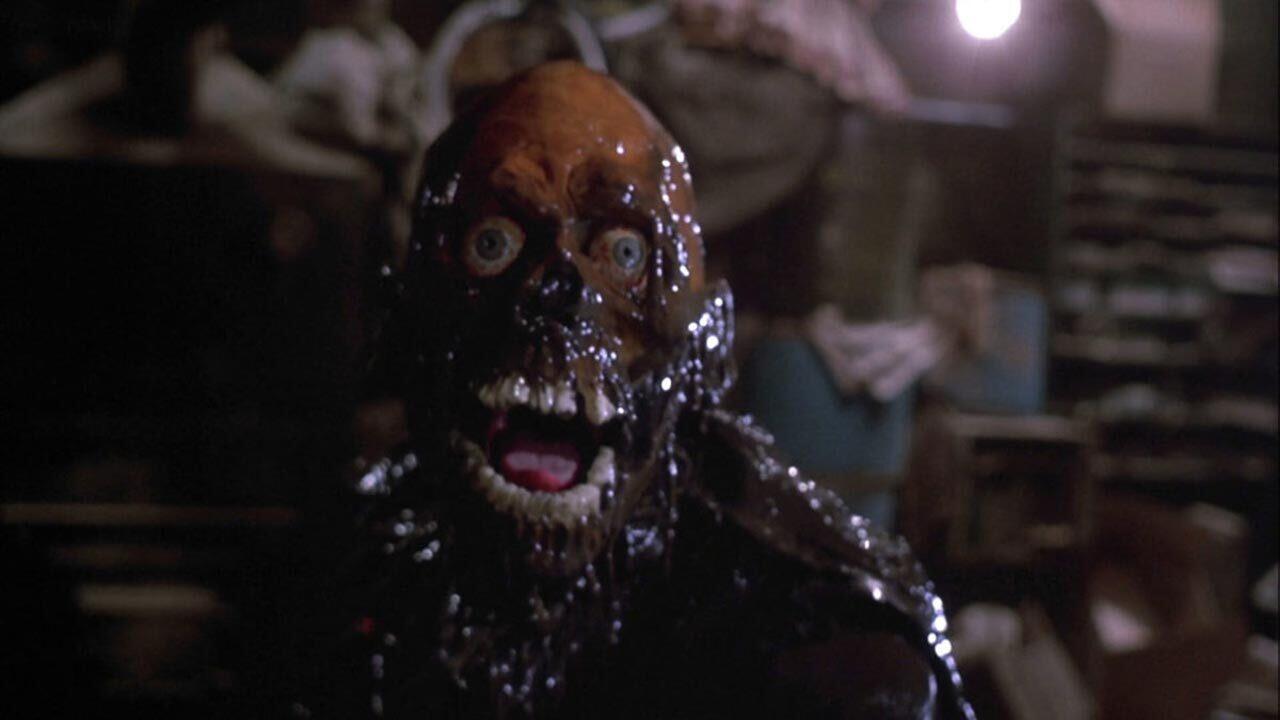 Return of the Living Dead is a dark comedy that’s actually scary. Or rather, it was likely pretty scary when you saw it as a kid; the Tarman zombie was a prominent figure in children’s nightmares. Return would introduce nearly indestructible zombies and the desire to eat brains (as opposed to all human flesh), turning some of the accepted concepts on their heads. Return of the Living Dead’s campy plot and punk rock infused cast helped to keep things light, while the terror of the growing horde encroached on the comedic trappings. 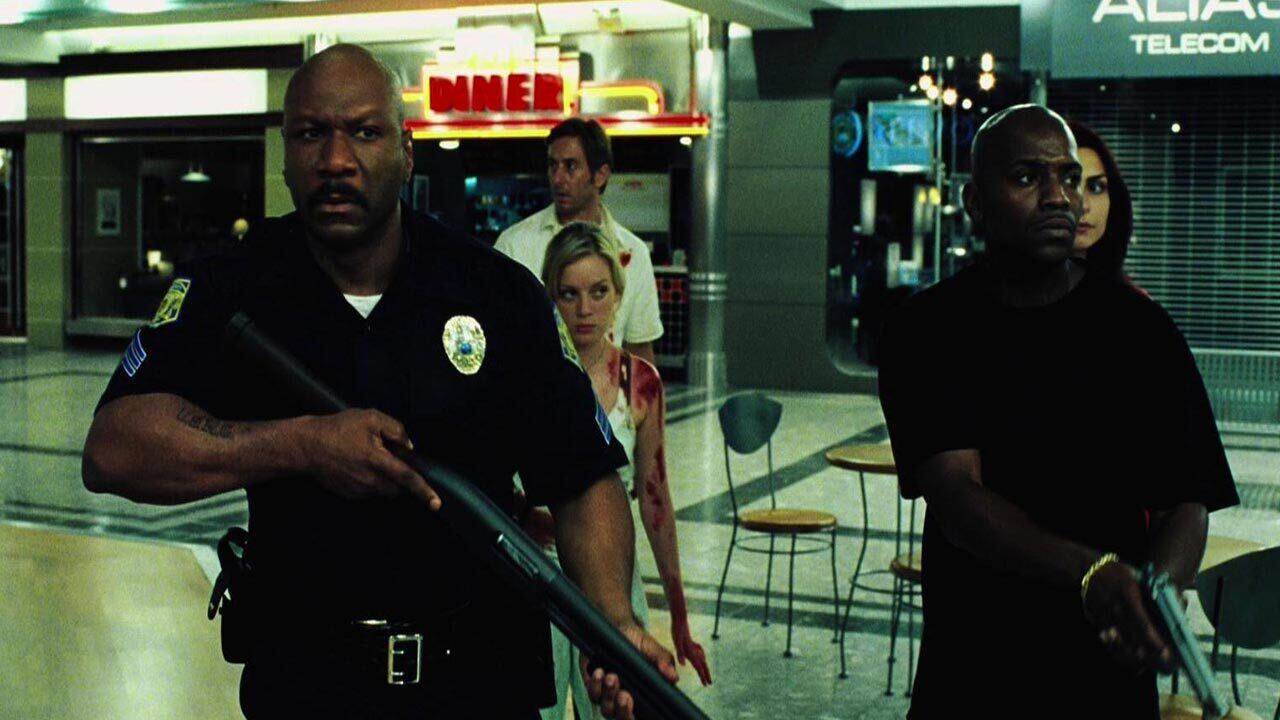 The Dawn of the Dead remake is a wild ride. Directed by Zack Snyder and written by James Gunn, it features a solid plot, impressive special and practical effects, and some truly terrifying moments thanks to the presence of the fast-moving zombies. It doesn’t offer the same social commentary as the original, nor did it move the needle in terms of what zombie films could be. Still, it made up for all of that by being entertaining as hell! 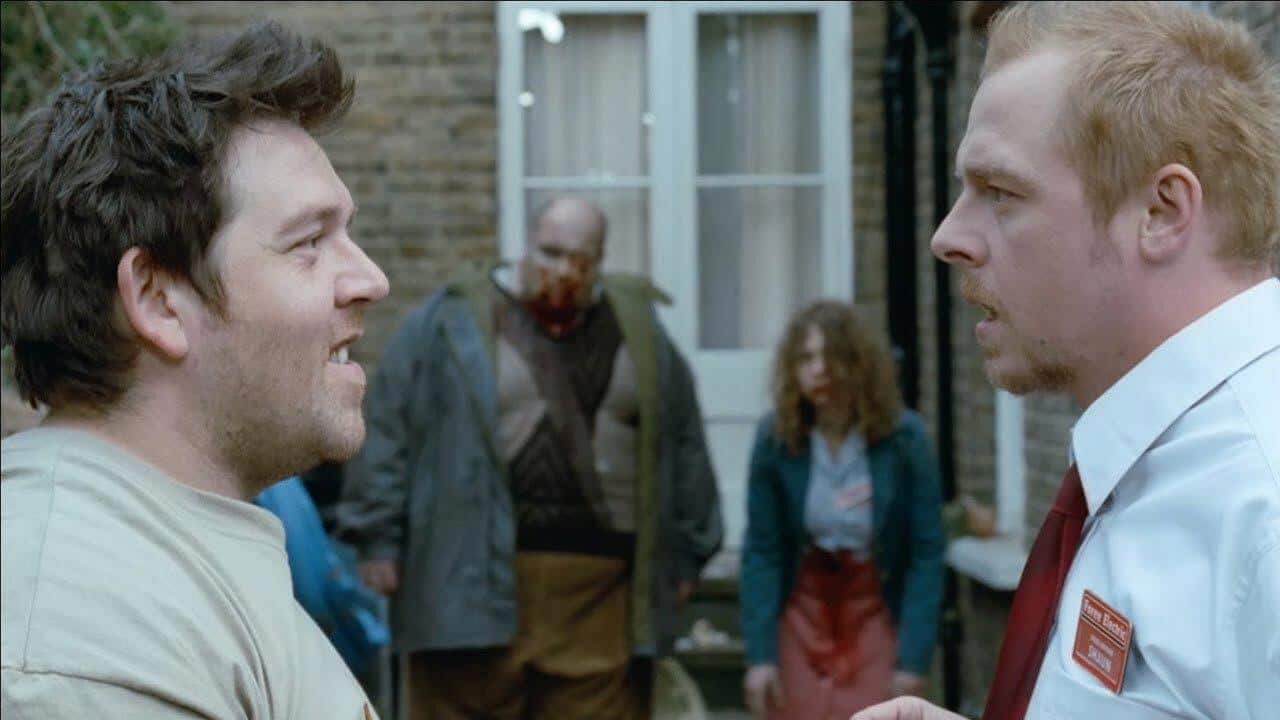 6. Shaun of the Dead

Similar to Zombieland, Shaun of the Dead pokes fun at the genre. It also provides a comical, yet heartfelt coming of age story–where a grown man matures into the person he’s supposed to be, albeit during the end of the world. The situational comedy is spot on. It sports a solid cast and a decent amount of gore. Shaun of the Dead is just, all around great. 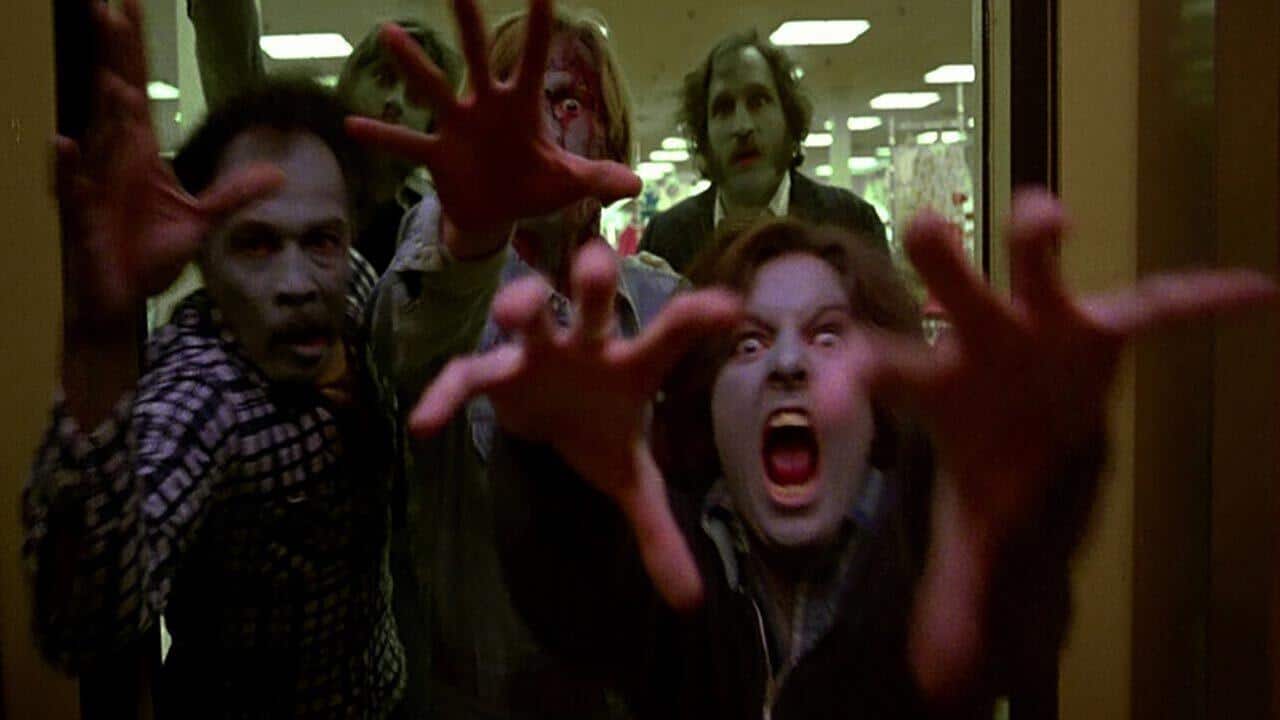 The original Dawn of the Dead remains one of the best zombie films ever. Following the events of Night of the Living Dead, it depicts the fall of mankind in a chilling fashion. Most of which was made believable thanks to solid performances from the cast.

Dawn of the Dead is a classic for multiple reasons. It provides a great plot, plenty of scares, and a dreadful atmosphere, all while delivering a piercing view of consumerism (at that time). On paper, there aren’t many zombie movies that are better than George Romero’s second undead feature. 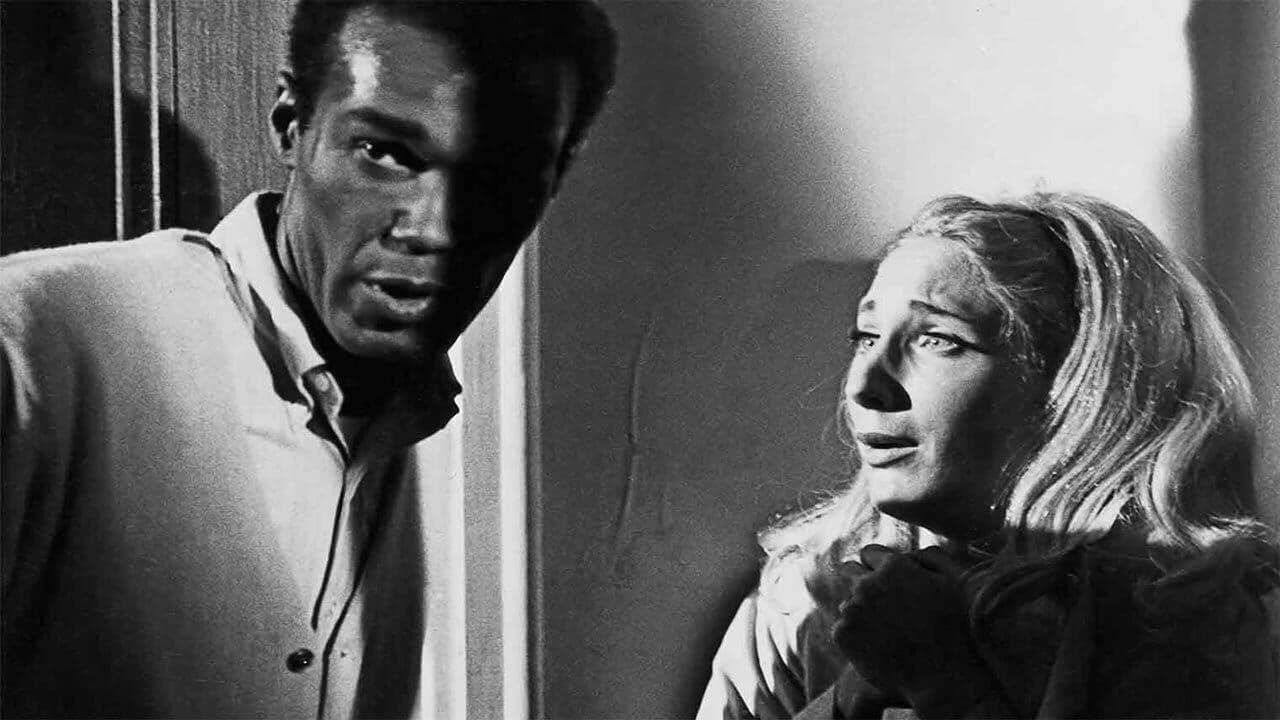 Night of the Living Dead is also a classic. From the way the film came together–some of the more interesting bits where the results of sheer luck and/or accident–to how it went on to establish several zombie staples, there’s no denying its cultural impact. And while it doesn’t live up to today’s standards on several fronts, Night of the Living Dead is still an entertaining watch. If for nothing else, to see how today’s zombie came to be. 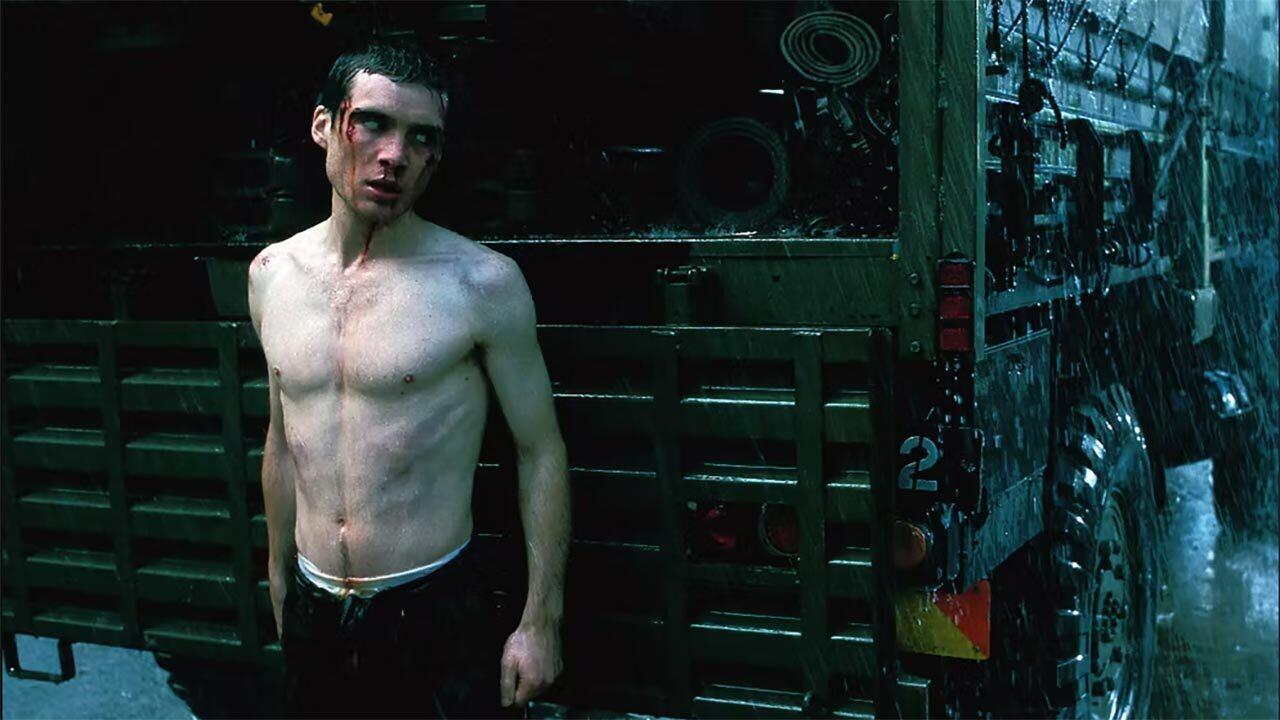 28 Days Later is amazing. The premise is partly silly, scientifically speaking. The how’s and why’s don’t matter, though. It’s the setting, the struggle to survive, and the bleak view on humanity that captivates. Moments of levity are sprinkled in. The band of survivors are at times hopeful. But the world of 28 Days Later is grim. So much so, that one of the most harrowing scenes is based on the notion of being left behind. Because even though things are bad, life wouldn’t be much at all if everyone you knew suddenly disappeared. 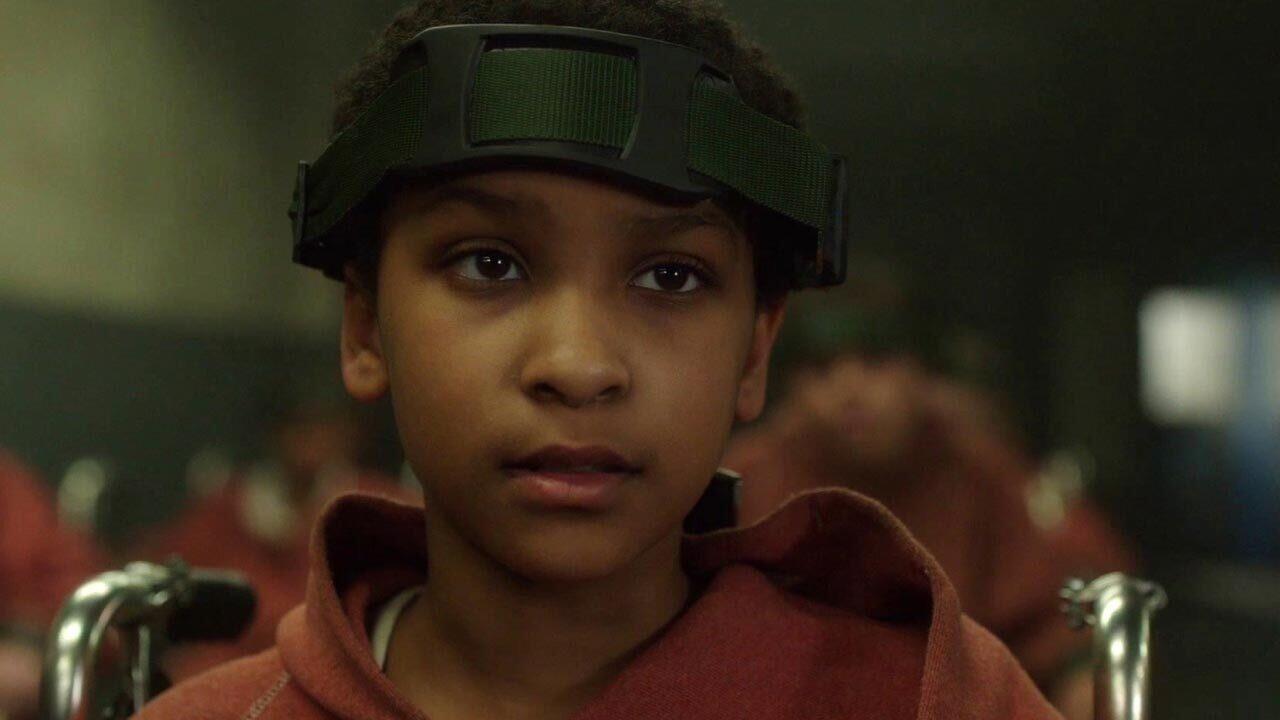 2. The Girl with All the Gifts

The Girl With all the Gifts is a haunting tale of survival, not just of the humans but of the zombies themselves. It presents an interesting dilemma wrapped in an evolutionary-based conundrum; who gets to decide what species of man is allowed to live?

Beyond the dope premise is solid acting–Sennia Nanua is amazing–an eerie, yet enchanting score, likable characters and plenty of unsettling moments. The Girl with All the Gifts is thought provoking as it is entertaining. 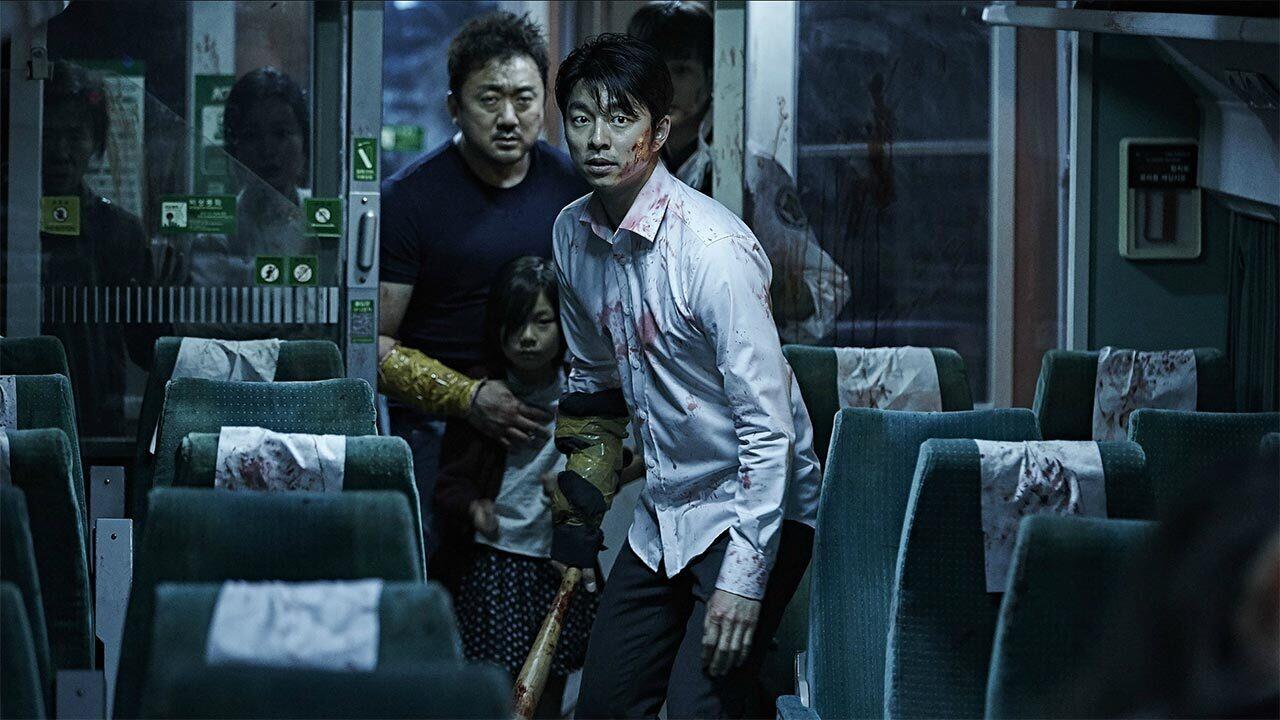 Train to Busan somehow encapsulates most, if not all of the things that make a great zombie movie. The premise is grounded in reality that not only comments on society as a whole but also on certain dysfunctional family dynamics. There’s humor but only enough to offer a bit of levity before the next wave of doom hits. The film’s fast-moving zombies provide plenty of scares. The way they smash through obstacles and each other in order to attack their prey reflects how dangerous that can be; the protagonists can seemingly succumb to the horde at any time.

Train to Busan’s practical effects and CGI mesh well together. The zombies are always perceived as a real threat. That said, what really moves things forward is the cast. Well-acted heroes and villains populate the movie. And the core story beats provide enough reasons to care about any of them. Aside from a certain character’s final moment, that some feel could have been avoided/was needless, there’s nothing bad to say about this movie. Train to Busan is that good!