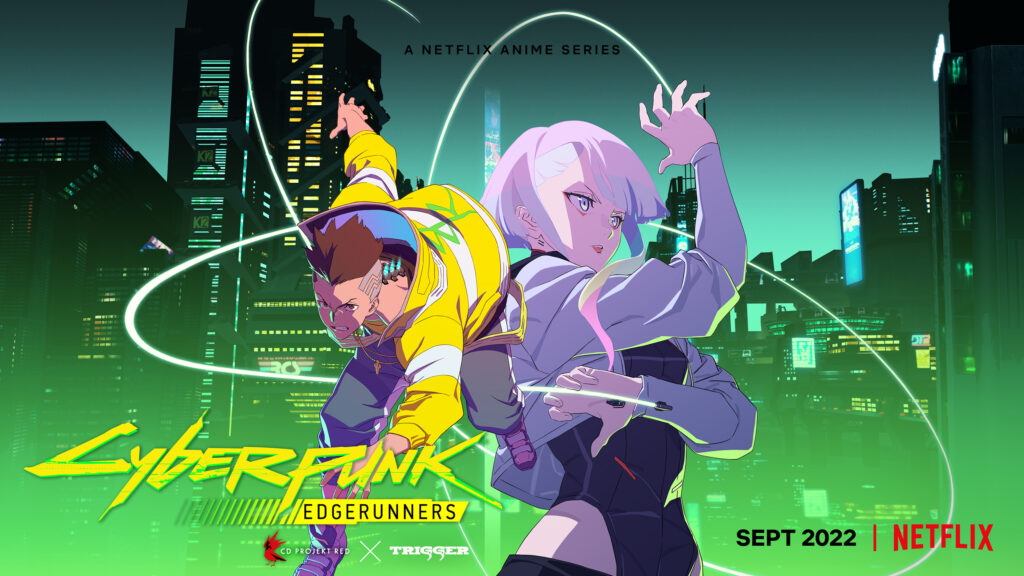 Hiya chooms. We’ve got some great news regarding the upcoming Cyberpunk 2077 spin-off anime series Cyberpunk: Edgerunners. At Geeked Week 2022, Netflix unveiled a world premiere clip from the series, in addition to filling us in on lots more information regarding the highly-anticipated series.

Created by the renowned game development studio CD Projekt Red (the team who brought us the acclaimed Witcher games, including The Witcher 3: Wild Hunt, and Cyberpunk 2077), the show is being brought to life by Japanese-based animation company Studio Trigger, with Hiroyuki Imaishi (Gurren Lagann, Kill la Kill, Promare) directing.

Yoh Yoshinari, of Little Witch Academia fame, is the chief character designer and the executive animation director, while Masahiko Otsuka (Star Wars: Visions “The Elder”) and Yoshiki Usa (GRIDMAN UNIVERSE series) are in charge of writing the screenplay based on the story provided by CD Projekt Red.

The first clip certainly plays up the violence from the series and gives us a peek at what appears to be some truly badass female characters, all while “Acid Breather” by Mastiff plays in the background. That song is one of several featured on the radio in Cyberpunk 2077.

Below you’ll find the key art for the series, showcasing what appears to be two of the show’s main two characters.

When is Cyberpunk: Edgerunners coming to Netflix?

We do not have an official date yet but Netflix has revealed that the series is coming out in September 2022. That’s just a few months away! We’ll let you know the exact date as soon as we have it.

How many episodes will be in Cyberpunk: Edgerunners?

Cyberpunk: Edgerunners tells a standalone, 10-episode story. It sounds like the show is being developed as a single season.

What is Cyberpunk: Edgerunners about?

From Netflix, Cyberpunk: Edgerunners tells a story “about a street kid trying to survive in a technology- and body-modification-obsessed city of the future. Having everything to lose, he chooses to stay alive by becoming an edgerunner — a mercenary outlaw also known as a cyberpunk.”

Do you need to have played Cyberpunk 2077 to understand Cyberpunk: Edgerunners?

The anime series is being touted as a “standalone” story, so I would assume that means you do not need to play the game to understand it, although playing the game will likely enrich your viewing experience and vice versa.

Has the voice cast been announced for Cyberpunk: Edgerunners?

No, Netflix has not yet revealed the voice cast for the series.

Stay tuned to Netflix Life for more updates on Cyberpunk: Edgerunners and make sure you set a reminder on your Netflix account for the show.