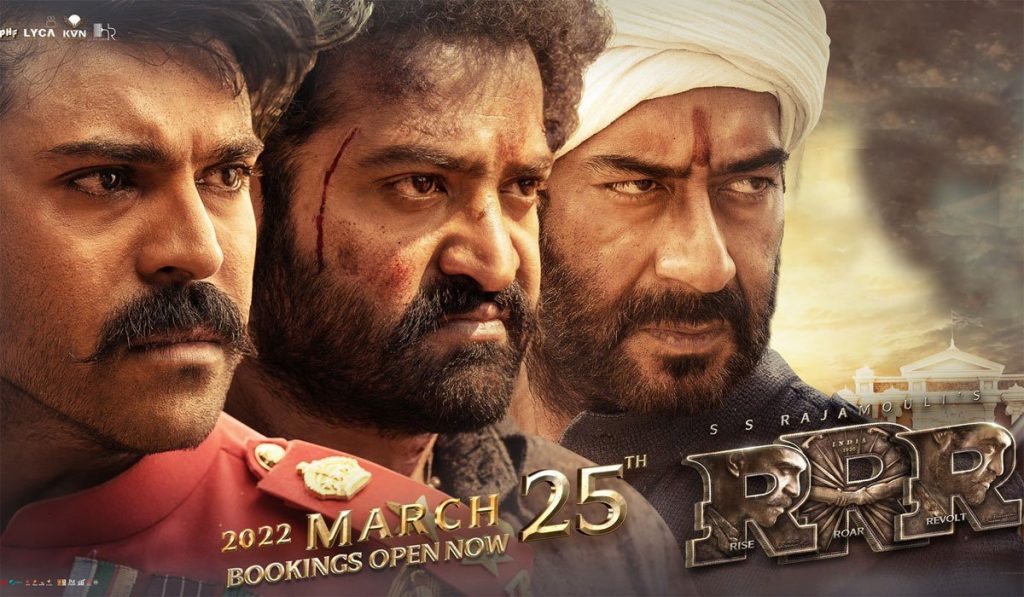 What Is the Film About?

Set in the Adilabad district of pre-Independent India in the 1920s, Malli is kidnapped by Britishers for her lovely voice. Bheem (Jr NTR) is entrusted with bringing her back whereas Raam (Ram Charan) takes the bounty to catch him.

Did Raam catch Bheem? Or did he realise his folly and help Bheem in his endeavour is the basic premise of RRR.

When director SSR Rajamouli says that both the stars are vital for the narrative, he means it seriously. We see that in RRR where both the actors do well sticking to their strengths.

NTR playing Bheem is the emotional anchor of the whole movie. It is why he scores the brownie points.
The intro is on expected lines, but the pre-interval block and Komaram Bheemudo sequence stands out. Right from the start, his character arc grows in strength before sharing it with the other star.

It brings us to Ram Charan. His character is developed keeping in mind the story of RRR. It doesn’t deviate for the sake of heroism until the last half an hour in the second half. The introduction sets things perfectly in that regard where Raam is presented ruthlessly. Compare this to Bheem, Jr NTR’s intro is more cinematic and hence seems better.

When it’s time for the climax, Charan gets the best dialogues, get up and intro meeting the hype. The ‘Alluri’ get up is especially extraordinary and he nailed it.

The master storyteller SS Rajamouli directs RRR. It is a character drama set in the background of pre-Independence. The narrative focuses on the characters of Bheem and Raam.

There is a formulaic approach at the beginning when seen superficially, as in the beats the predictable. However, Rajamouli being the master storyteller that he is easily overcomes it with high octane intros for his stars. Such an issue never crops in our minds.

Both the stars are introduced in a fan-pleasing manner and are equally vital to the narrative. But, Bheem shines as it feels free from the chains of the narrative. It is cinematically mounted whereas Raam intro is done thematically. The latter introduces the character and also takes the narrative forward simultaneously.

The proceedings that follow are lighter vein in emotions but are essential in establishing the bond. If that isn’t the case, the core theme would have fallen flat. If not for the establishment of the friendship between the two, the pre-interval, interval and post-interval sequences wouldn’t have the same impact. This is where Rajamouli hit a sixer in the first half itself.

After a sensational interval, the second half takes time to get going. There are a couple of emotional moments that stay with us. The Komaram Bheemudo block is a highlight that puts to use the characterisation of the stars to great use thematically as well as cinematically.

On the flip side, the Bheem escape sequence and portions involving Alia Bhatt could have been done better.

Still, there are no dull moments, even if the narrative slackens. Things once again gain momentum after the transformation of Ram Charan. The pre-climax and climax are dominated by the duo. But, it’s Alluri who shines.

Overall, RRR has a fabulous first half and a slightly underwhelming, but thoroughly engaging second half. If you are a fan of either of the stars, watching RRR is a no brainer decision. In case, you are not, the grandeur, larger than life making makes it a sure shot watch.

Performances by Others Actors?

Apart from Jr NTR and Ram Charan, everyone else plays bits and pieces supporting roles. Alia Bhatt has nothing significant to do barring a couple of vital moments with Tarak. Yes, Alia Bhatt is paired with Charan, but she has key scenes with Jr NTR. Olivia Morris is alright. She has the main part in the first half and gets the typical entertaining segment in the first half.

Ajay Devgn appears briefly in the flashback and is alright, as usual. Samuthirakani is good whereas Rahul Ramakrishna is dependable like always. Among the rest, Alison Doody and Ray Stevenson are alright.

Music and Other Departments?

MM Keeravani who is a regular with SS Rajamouli provides the music for RRR. The outdated musician disappointed everyone with the songs, but he makes up for it with the background score. It is terrific. Another regular with Rajamouli is Senthil. The cinematography is excellent. The forest backdrop sequences and night shots are wonderfully captured. But, that’s not it, there is more, and he has done an excellent job.

The editing could have been better. There is a perception of lengthiness, but it doesn’t affect much. The writing is alright. It hits the right notes where it matters, but that’s it.

Drag in the Second Half

Did I Enjoy It?

Will You Recommend It?

Final Report: After a superb first half, the second half takes time to get going. But, it gets better and the last half an hour is excellent.