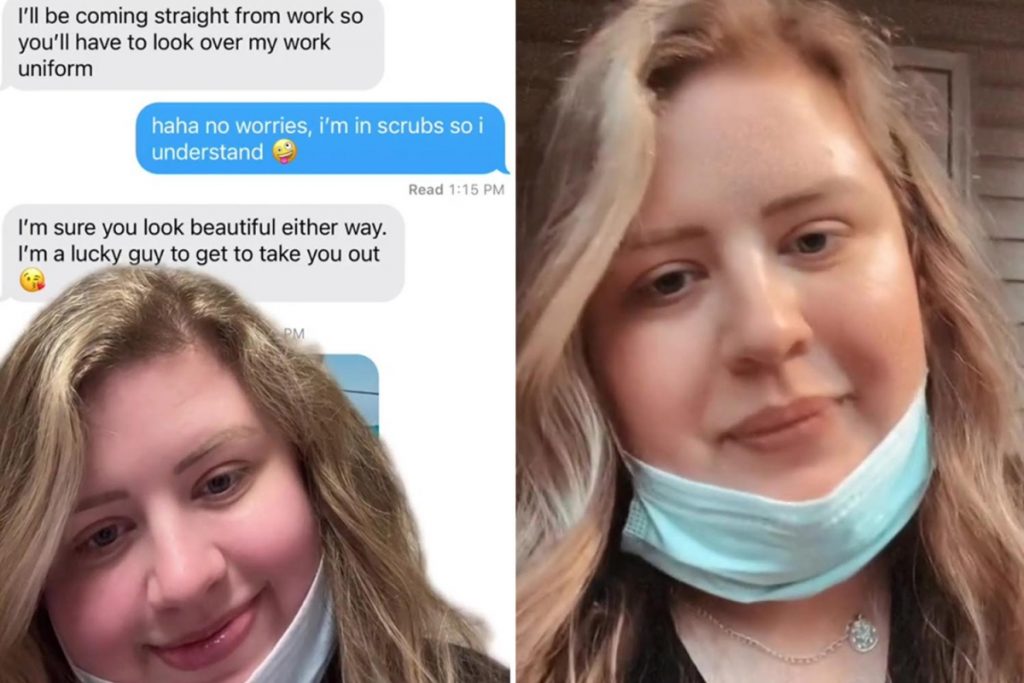 A WOMAN was left horrified when her Bumble date sent her a shocking text meant for his friend just before they met up.

TikToker Samantha Rose shared the unbelievable message she received before she headed out to meet the brutal boy she met online. 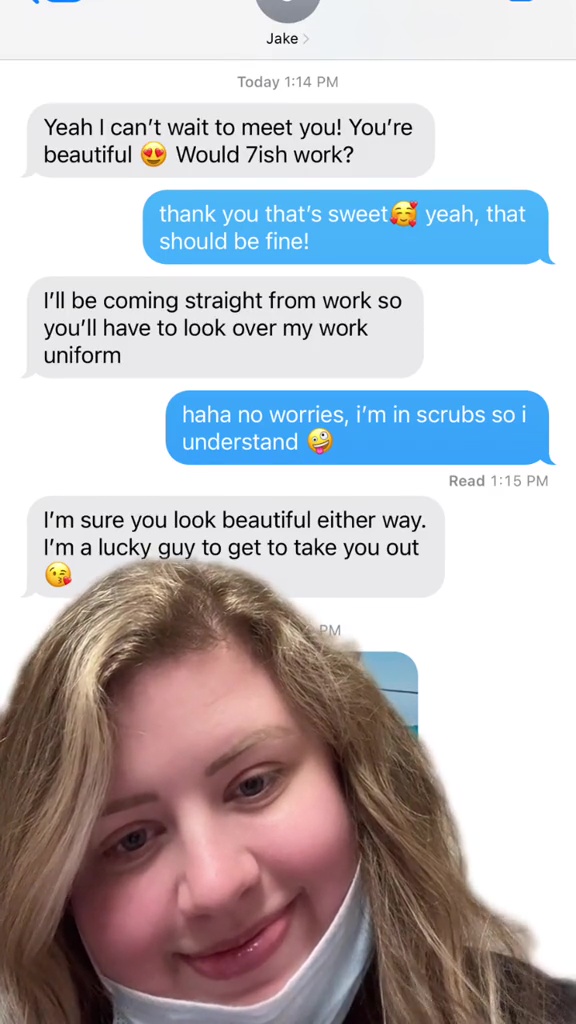 Samantha was organizing a date with ‘Jake’ when his Prince Charming mask slippedCredit: TikTok/@samantha_roseeeee 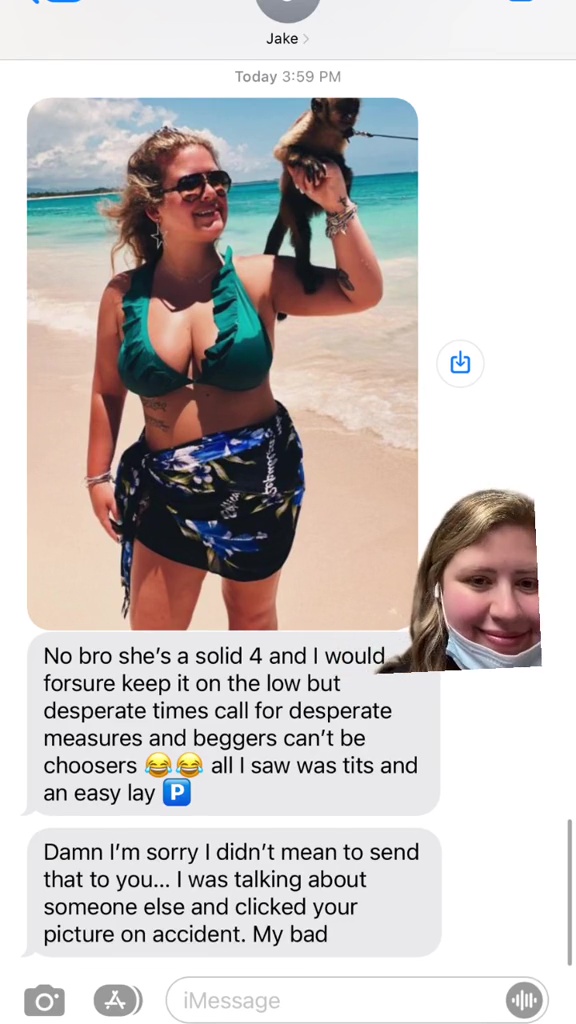 She bravely shared a screenshot of Jake’s horrific message meant for his palCredit: TikTok/@samantha_roseeeee

In a viral video that has racked up over 7.1 million views, the singleton explained she had been chatting to a guy named Jake for a number of days after spotting him on Bumble.

Their conversation soon heated up as it moved from the dating app to iMessage, seeing the pair organize an evening date.

A screenshot of their message shows him excitedly saying he “can’t wait” to meet Samantha as the pair make plans.

The discussion of their first meeting then continues, with Jake boasting how he is “a lucky guy” to be able to take the blonde out.

But it all soon came crashing down for the online lovebirds – as after bombarding her with compliments, the womanizer accidentally sent a text to Samantha meant for one of his pals.

Alongside a snap of her in a bathing suit, Jake wrote: “No bro she’s a solid 4 and I will forsure keep it on the low but desperate times call for desperate measures and beggers [sic] can’t be choosers all I saw was t*ts and an easy lay.”

The sheepish Bumble user then realized his mistake and claimed he “was talking about someone else and clicked her picture by accident”.

Samantha ghosted Jake after the cruel comment, while sharing a clip of her disaster dating story.

Her tale about being unlucky in love quickly went viral, with TikTok users blasting Jake’s vile behavior and telling the young woman she had “dodged a bullet.”

Another added: “Omg. My heart just dropped. At least he showed his true colors and you didn’t have to waste your time.”

While a third joked: “I just *know* he was holding a fish in one of his photos.”

After ignoring the brainless Bumble user, Samantha hinted she thought Jake’s alleged slip-up could have been intentional.

“I was quite literally too stunned to speak,” she said, explaining her reason for not responding to the vile messages.

But it seems her TikTok well and truly got his attention – as Jake then attempted to gaslight his former date and even branded HER crazy.

She shared further text messages from him where he wrote: “So you’re just not going to show and then make a TikTok about me?

“It was a joke but I should have picked up that you were crazy when you said you foster kids. You can’t get a man so you get a bunch of broken little kids to fill that void.”

Samantha later revealed Jake’s terrible attitude and lack of remorse left her suspecting she was actually being catfished by a disgruntled old flame.

Of course, this is far from the first questionable dating experience that evolved from an app.

We previously old how another woman was gearing up to meet her dream Bumble date – before receiving a string of creepy messages from him.

And this dating app user was left horrified after meeting a guy off Tinder who hit on girls in front of her and then asked her to MARRY him via Facebook. 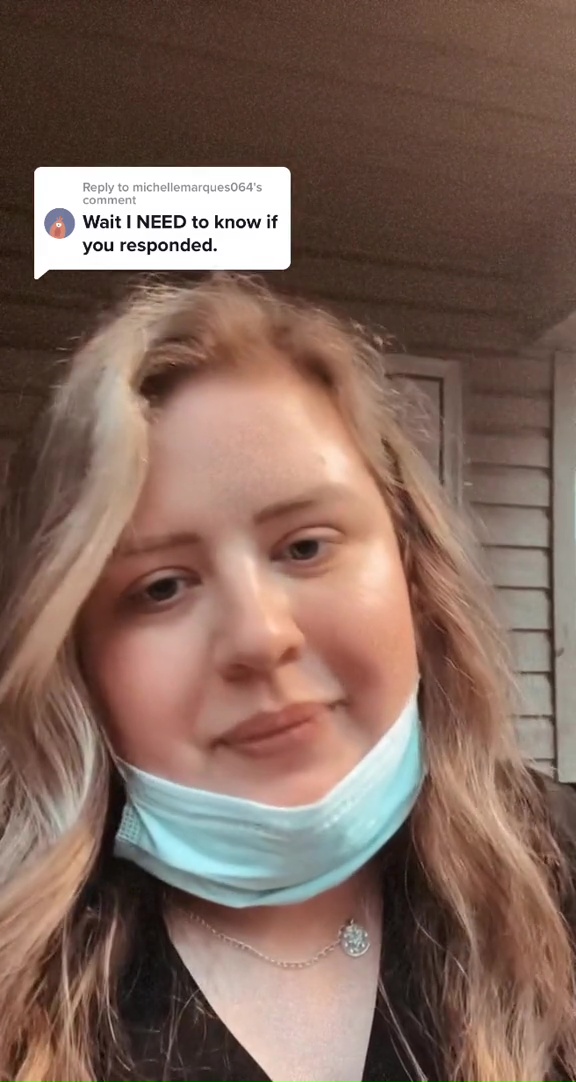