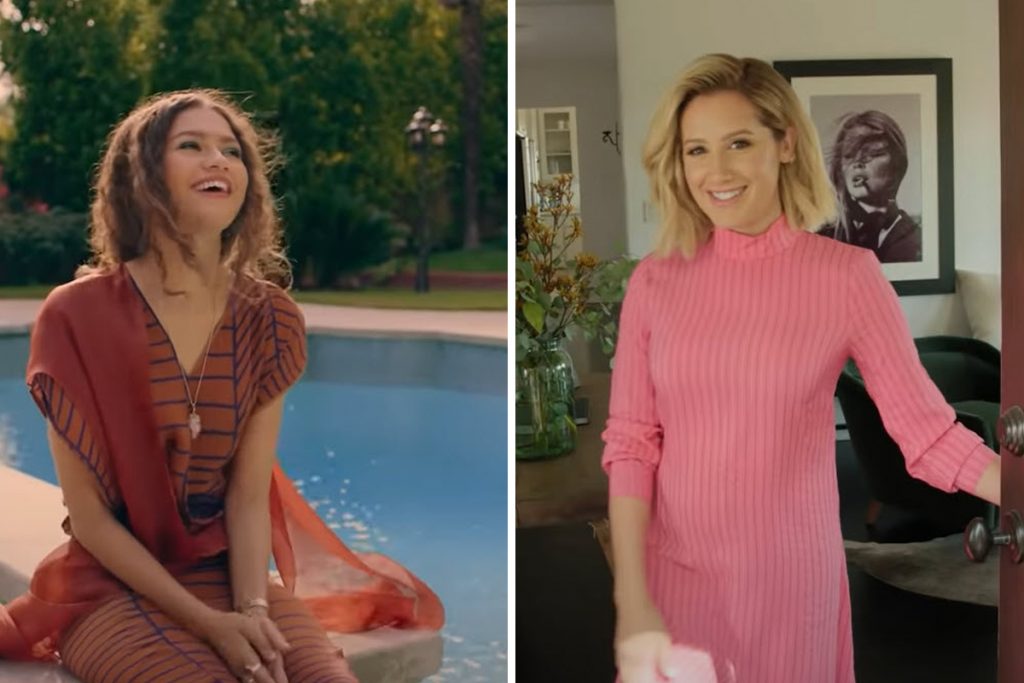 Inside the lavish homes of former Disney Channel stars, from Hilary Duff to Zendaya and beyond

DISNEYLAND is famous for its huge fairytale castles, and some of our favorite former Disney actors have lavish homes fit for royalty.

Here’s an inside look at the homes of former Disney stars, from Hilary Duff to Zendaya and beyond. 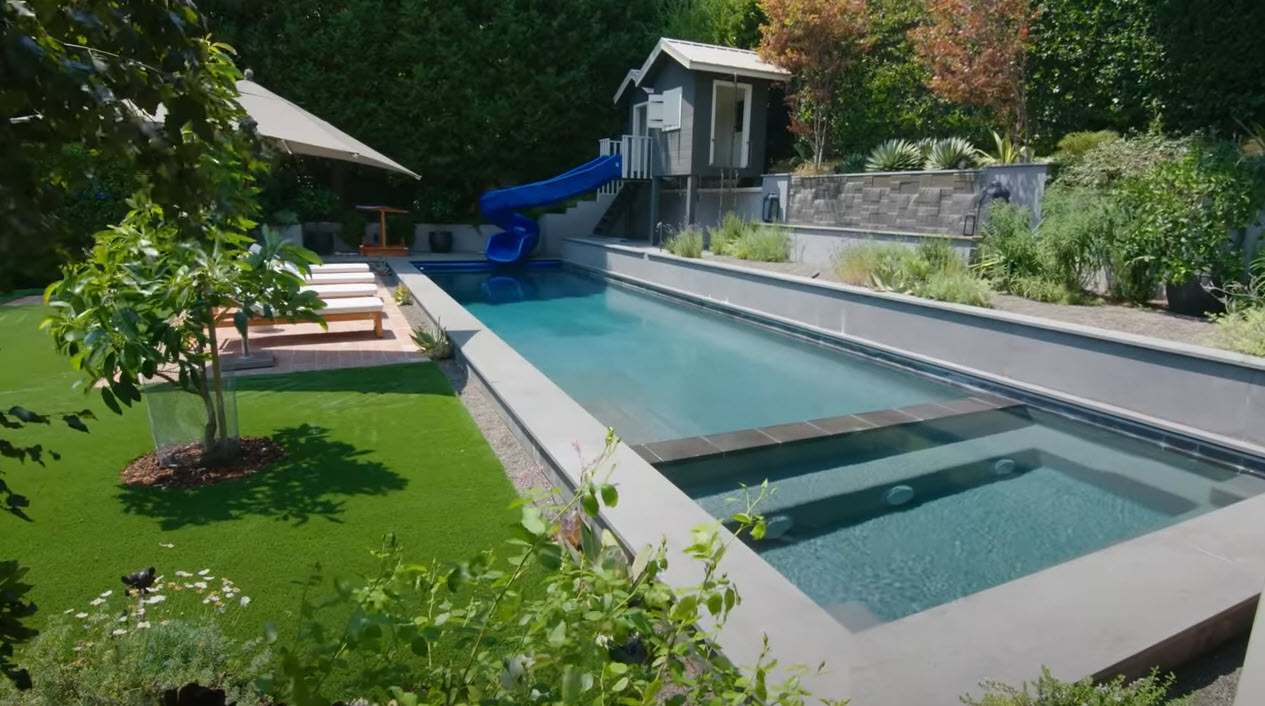 Hilary Duff’s backyard doubles as an oasis for her and a fun place to play for her three kidsCredit: YouTube

Hilary Duff moved to the Hollywood Hills from Toluca Lake in 2010, buying a five-bedroom home for $3.85 million.

She told Architectural Digest she enjoyed the privacy offered by her yard, which is surrounded by tall hedges and looks out at a “big mountain.”

She has remodeled the 5,260-square-foot Georgian-style home three times over a decade, and it has morphed into a stylish, yet functional space for her growing family.

The How I Met Your Father star’s bright and bold designs flow effortlessly through the house, but might be best exemplified in her kitchen.

The back wall of the space dons black and white tiles that form a diamond pattern and are paired with blue cabinets and gold accents.

“This was one of the first things that I found that I felt like: ’Oh my God I have to have those,’” she recalled about first spotting the tiles.

Heading outside, Hilary’s bubbly personality is exemplified by a backyard fit with a gorgeous in-ground pool, a trampoline (she did gymnastics as a child and loves to hop around with her kids), and even a chicken coop.

The mom of three had six chickens when she let Architectural Digest into her home along with several hatchlings and said taking care of them has been a “fun project” for her.

It seems like her home is certainly what dreams are made of. 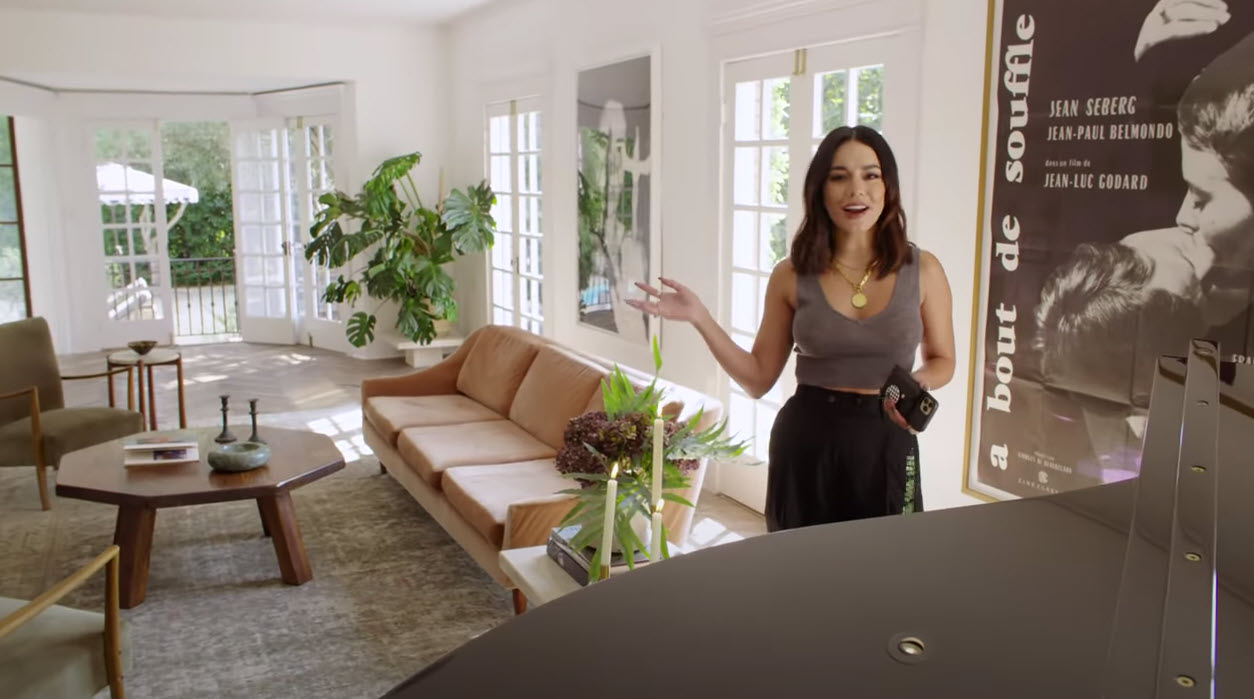 Vanessa Hudgens’ home has a serene feel to itCredit: YouTube

Vanessa Hudgens was the “It Girl” of the early 2000s after Disney released the majorly successful High Scool Musical saga between 2006 and 2008.

She still has a booming schedule, as she is credited on IMDb as an actress in four projects in 2021 alone.

That’s why it was important for her to have a serene place to come home to at night, which happens to be the former house of actor Gary Oldman.

Vanessa bought the Georgian-Colonial Los Feliz mansion in 2018 for just under $5 million, according to Architectural Digest.

​​The house contains three bedrooms and four bedrooms over 3,168 square feet, plus a detached one-bed, one-bath guesthouse above a two-car garage.

Vanessa claimed she knew she found her ideal oasis as soon as she saw the ivy-covered front of the charming home.

“There were so many things about it that struck me,” she told the publication.

“Walking through the gate and seeing this house covered in ivy, surrounded by olive trees, it was like I had been transported to France or Italy.

As for the interior, she said her design style is French-inspired because she feels it matched the vibe of the land.

“And I wanted it just to be really like casual and relaxed and cozy,” she added.

“I’m a big fan of candlesticks, so you will see them everywhere.”

Los Angeles is a crowded city, but one couldn’t tell sitting in The Princess Switch actress’ bi-level backyard.

Her yard hosts a large pool and hot tub surrounded by olive trees and custom face murals she had painted throughout her patio.

Down below is a wide-open grass area enveloped by several types of fruit trees.

“I really wanted a place that you can just run around in and kinda feel like you have a park.

“We have water balloon fights out here, we do little photoshoots out here, just run around and it’s so nice to have a space that’s open in LA that just allows me and my friends to feel like big kids.” 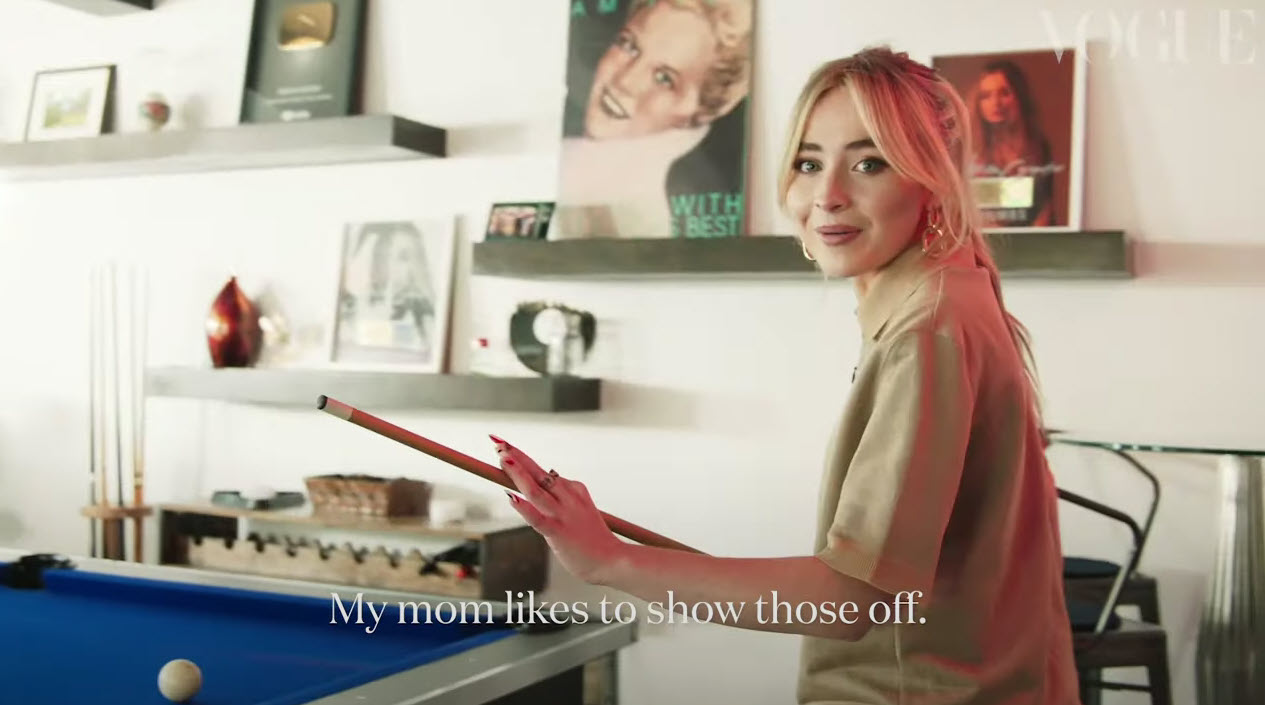 Between her solid acting career and success as a pop singer, she’s certainly worked hard for the fun, bright pad she lives in.

Upon entering, people are greeted by some of her favorite possessions: her French Ferris Bueller’s Day Off poster and her Harry Potter wand, which she keeps readily available “just in case” she ever needs to cast a spell.

And although her grand Baldwin piano is her absolute favorite thing in her house, most of her gatherings are spent in another room that hosts a bar, a pool table, and casually shows off some of her awards.

“This is the part of the house that when I have friends over or when the whole family gets together we all like to come in here and play a nice game of pool before we go outside into the real pool,” she told Vogue India.

Like Hilary Duff, Sabrina’s backyard also hosts a pool and trampoline, but unlike Hilary, she also has a ping pong table and even more impressively, her own basketball court.

When she’s not with friends, Sabrina relaxes in her bedroom, which she calls her “safe place.”

Her “safe place” surprisingly includes a swing hanging from the ceiling and a makeshift recording studio in the closet. 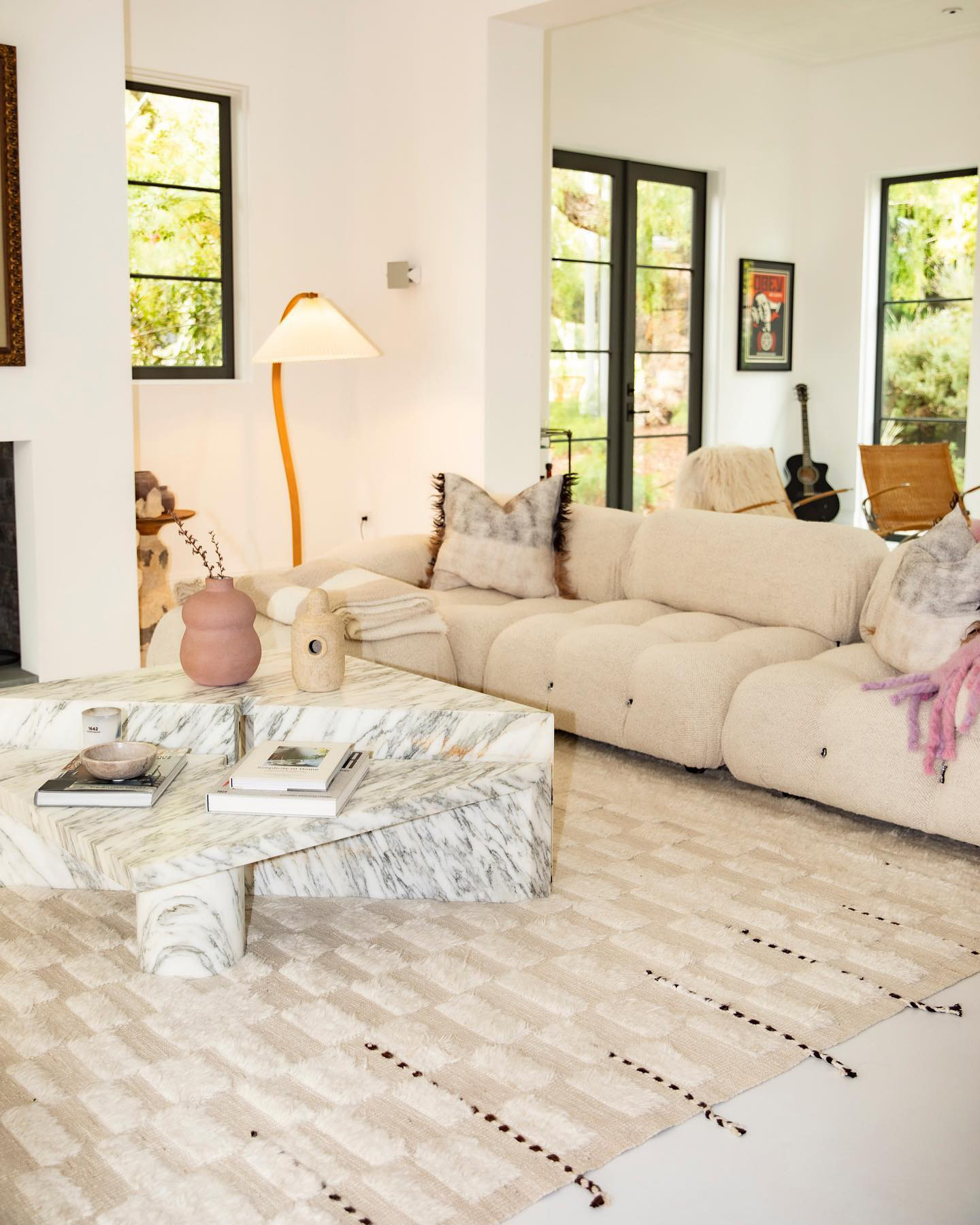 Ashley Tisdale is proud of completely decorating her home by herselfCredit: Instagram/Frenshe Interiors

Many people know Ashley Tisdale is a successful actress, but some don’t realize she has an eye for design thanks to her father, who worked as a contractor when she was growing up.

In fact, she loves design so much, she launched a passion project, an interior design company called Frenshe Interiors in 2021.

Ashley’s love for interior design made her confident when it came to buying a 1930s mansion with composer husband Christopher French, which took one and a half years to find.

“I knew the moment we saw it. I can’t explain,” she told Architectural Digest in 2018.

“There were certain things I wanted that this house doesn’t have, like a huge driveway… But it didn’t matter.

“We stepped onto the property and I knew, this is it.”

The 3,5000-square-foot Colonial allowed Ashley to let her creative juices flow, but not for long, because she ended up moving in 2021.

Months before she gave birth to her first child, she and her husband moved into a​​ Mediterranean-style villa with three bedrooms and three-and-a-half bathrooms.

She has gushed on Instagram about how proud she is of her current residence, as she decorated it from top to bottom herself.

“I look around and I’m in love with every room, every piece,” she said alongside a slideshow of some interior snaps of her stylish home.

“I feel like my home showcases my personality and design.”

She and her growing family’s private home near the Hollywood Dell is filled with a very neutral palette but has subtle pops of color and fun design, matching Ashley’s bright personality.

“When designing our space I wanted it to be chic but fun,” she explained in the caption of a video showing off some of her favorite furniture finds. 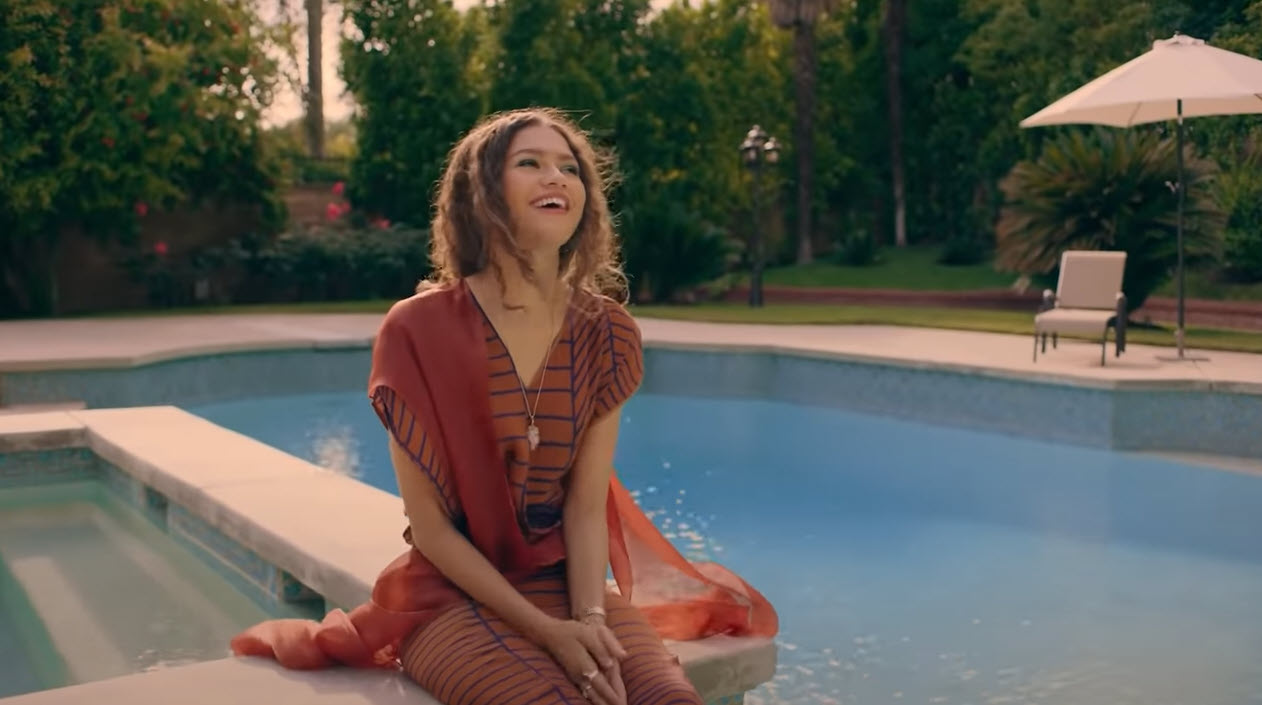 One of the hottest actresses in Hollywood is former Disney channel star Zendaya, who got her big break starring on Shake It Up opposite Bella Thorne between 2010 and 2013.

Despite being one of the biggest stars at the moment, Zendaya keeps her personal life quite private, which is why fans were pleasantly surprised when reports that she bought a house in London with boyfriend Tom Holland circulated.

Of course, Zendaya isn’t just ditching the states to move across the pond, so where does she live?

Zendaya has a $1.4 million mansion located in the Northridge neighborhood of Los Angeles, according to Vogue.

It boasts five bedrooms, five bathrooms, and a spacious yard with a stunning pool surrounded by lemon trees.

Unlike many celebrities, she didn’t let Vogue inside her house during their popular 73 Questions series, but she has given fans a glimpse of what the inside of her lavish-looking pad looks like.

For instance, she typed a sweet Instragam caption ahead of Christmas in 2016 gushing about how much she loves her home with its grand, curving staircase and ceilings that fit a seemingly enormous Christmas tree.

“I always wanted the big tree … and spiral staircase just never thought I’d have one of my own at 20… I’m so grateful and appreciative for everything I have cause none of it was given, none of it started like this…” she explained.

It’s clear that all these stars take pride in their homes, even if it takes a move and a renovation … or three.