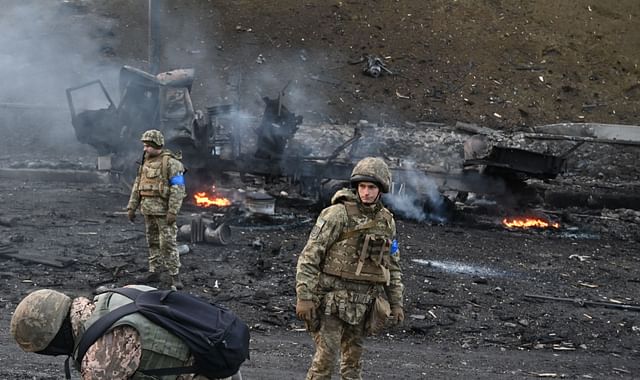 Attack on Ukraine, where the countries of the Arab world will get food

There are food crises in different countries of the Arab world. The crisis is expected to escalate further. Russia’s attack on Ukraine could further reduce the number of loaves of bread in the Arab world, including Egypt, Lebanon and Yemen, the AFP news agency reported.

The Arab countries import wheat from Ukraine and Russia. They are heavily dependent on these two countries for imports. Wheat flour bread is one of the staple foods of the region due to its eating habits. As a result, if its supply is disrupted, there is a risk of food disruption in the Arab world.

The Middle East Institute, a Washington-based think tank, says if the Ukraine crisis disrupts wheat supplies, protests in several Middle Eastern and North African countries could escalate into a food crisis and destabilize the situation.

A recent example is the North African country of Sudan. The military coup overthrew long-ruling dictator Omar al-Bashir in 2019. The uprising was sparked by mass protests against the three-fold increase in bread prices. Despite Bashir’s departure, the military government is still in power.

Protests are taking place against the current military government in Sudan. The military has also been seen taking steps to prevent the mass protests from escalating over the price of bread. The second top official of the Sudanese military government was in Moscow when the attack took place in Ukraine last Thursday. Originally went there to discuss trade relations.

The war in Yemen has been going on for seven years. Bread there is now a luxury food. In other words, this food is not within the reach of ordinary people. There was also famine in the war. According to the United Nations, 130,000 people have died as a result of the famine.

Highlighting the situation in the country, Walid Salah, a Yemeni government official, said most people struggle to buy basic food. The war in Ukraine will only make matters worse.

Russia tops wheat exports, according to US Department of Agriculture Ukraine ranks fourth in food exports. Last Thursday, the price of one ton of wheat was ৮ 364. It is feared that the price of wheat will surpass any previous record due to the Russian military operation.

This was stated by David Bisley, Executive Director of the United Nations World Food Program (WFP). He said Russia supplied half of the WFP’s wheat needs. This war could have a dramatic effect on the supply of that wheat.

Syria imported 1.5 million tons of wheat last year, according to data released this month by The Syria Report, a Syrian economic publication. Most of it came from Russia.

The government of President Bashar al-Assad has said it is taking steps to distribute the country’s wheat reserves. This will continue for the next two months.

Although there are stocks of wheat in the Syrian granary, there are no stocks in Lebanon. The wheat in the government’s granary cannot be run for even two months.

Lebanon has no food grains. No money either. The economic crisis has left more than 80 percent of the country’s population in poverty. The eruption in 2020 severely damaged Beirut’s various installations, as well as its food grain storage facilities. These archives contained about 45,000 tons of grain. Regarding the food crisis in Lebanon, Ahmed Hotait, the country’s breadwinner, said that the food grains that are in stock will last for about a month and a half.

Ahmed Hotait said Lebanon would be able to import wheat from the United States instead of Ukraine. But the crisis does not seem to be over. Because, it takes seven days for wheat to arrive from Ukraine. And it will take 25 days to come from the United States.
Morocco has a wheat crisis. There is a crisis in Tunisia. Tunisia imports 80 percent of its wheat from Russia and Ukraine. The country’s agriculture minister, Abdel Halim Gasmi, said the stockpile would run until next June.

Algeria tops the list of world’s food grain importers. The country has stocks of wheat for six months.

Egypt subsidizes wheat. In 1986, the government of Anwar Sadat was in danger of reducing the price subsidy of the route. The ‘bread riot’ has started. This forced the government to move away from the plan to reduce subsidies.