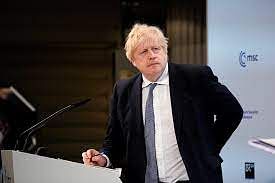 Boris announces the lifting of the Corona ban from England

Johnson told a news conference at Downing Street on Monday evening that the day had not yet come to declare victory against Covid. Because, Corona has not been said goodbye yet.

The British Prime Minister described the Corona epidemic as “the two darkest and most terrible” years in the peaceful history of his country. However he acknowledged that their numbers were not enough to defeat British officials. Now the number of infected and hospitalized patients is decreasing.

Boris Johnson said his country is now back to normal. He has also unveiled a plan called ‘Living with Covid’ or ‘Living with Corona’. While unveiling the plan, he told MPs that the ban on isolation of people affected by corona would be lifted.

The British Medical Association, an association of doctors, says the Johnson government’s plan will fail to protect people at high risk in Corona.

Opposition parties have stated they will not run in the by-elections. They said the Prime Minister was implementing the blueprint to get out of the Corona epidemic situation very quickly. They also expressed concern over the decision to close the free Corona test.

Chris Whitty, England’s chief health officer, said the lifting of the Corona ban had to be done slowly over time. Everything cannot be withdrawn in a hurry. He also warns that many people are still suffering from amyotrophic lateral sclerosis. Chris Whitty thinks people with Kovid need to be in isolation to prevent the spread of the infection among others.

The Scottish Government says the health guidelines it has received do not say anything about lifting the Corona ban.

The guidelines will take effect in England from Thursday

Corona sufferers will no longer need to be legally isolated. However, they have been advised to stay at home for at least five days and not come in contact with others.

The process of identifying people who have come in contact with people infected with corona will no longer be effective. The legal obligation to have a corona test once a week for children under the age of 18 is no more.

The নিয়ম 500 allowance for low-income people with coronary heart disease while in isolation is no longer in place.

People with or without symptoms will no longer be offered free corona testing at the mass rate. Now only people at high risk will be tested for coronary heart disease.

The person affected by the corona will decide for himself whether he will stay at home or not. He has no legal obligation to stay in isolation.

Patrick Valence, chief scientific officer of the UK government, has warned that the evolution of the corona will continue for the next few years. There is no guarantee that future types of corona will be less serious than amicron.

Patrick called for the establishment of a virus surveillance system to monitor new threats.