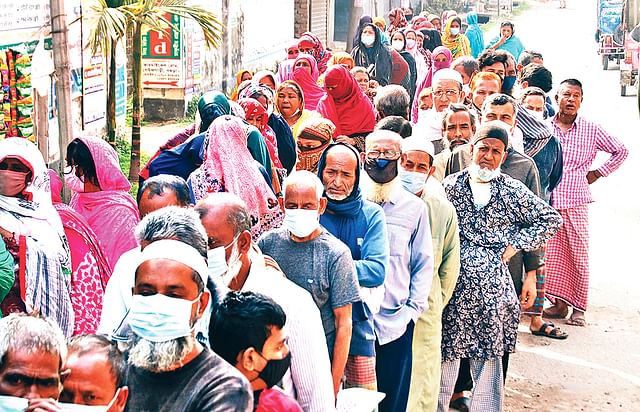 Low-income people are stumbling to buy rice and flour in the open market (OMS) in Bogra. Many returned empty-handed as there were several times more people than the demand. Such a situation was seen in the OMS outlets on Monday. The people concerned think that such a situation has arisen due to the unusual increase in the prices of daily commodities in the market.

Turning to the market, it has been seen that buyers now have to pay 43 to 45 rupees to buy one kg of flour in the retail market. And in the open market, open flour is available at 16 rupees per kg. One kg of thick rice costs 30 rupees. But buyers have to pay an average of 45 rupees to buy this rice in the retail market. Working low-income people are flocking to OMS outlets as prices are somewhat affordable.

At each outlet, 400 buyers are able to buy the product at a fair price. But the number of buyers in the line of every outlet in the city is double. This number is increasing day by day. As a result, the allotment at the sales center is running out by noon. Yesterday, Kalitala Hat, Subil School, Hasnajahan Bhandari High School, Kanuchgari City School and OMS outlets in Bakshibazar were visited in the city, with long queues of people buying goods at each center. Sonavan Begum (55), a laborer from Rahman Nagar, was standing in line at Kanuchgari City School Center around 12 noon to buy three kg of flour. He said he could not buy anything even after standing in line for two hours. Distributor Mohammad Parvez was selling rice and flour there.

District Food Controller Mohammad Ashrafuzzaman told Prothom Alo that the price of rice and flour at OMS outlets is more affordable than in the retail market, so there is more crowd of buyers. To handle the situation, food-friendly program rice is being sold through 263 distributors in the district from March 1. 1 lakh 53 thousand 96 card holders will be able to buy 30 kg of rice per head at the rate of Tk 10 per kg.

Rasheda Begum of Seujgari Railway Slum in the city said in the first light, ‘Hummer is not Swami. The family lives by working in people’s homes. Gharat tinda chalpal. The cost of cooking rice. Where to buy rice, pulses, vegetables, onions, oil, salt, chalk. I buy it at a lower price and eat it with bread. ‘

Rickshaw puller Ashraf Ali (60) did not get three kg of flour even after standing in line to buy flour at Sutrapur-Seujgari sales center. He said, ‘I came to Bian Thake to buy three seras of flour. Earnings in one day. Now the flour is in the shop. I have to return empty handed.