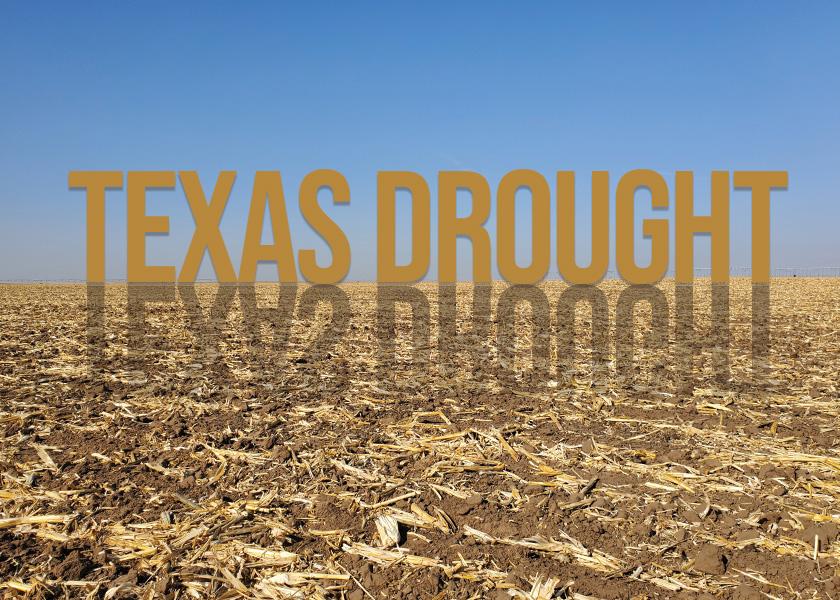 West Texas and the Texas Panhandle received crucial rains this week, reviving farmers’ hopes of producing a crop this year. A dire drought situation already robbed many farmers of their winter wheat, but with the drought picture setting up to be worse than 2011 in the area, it sprouted grave concerns about producing other crops such as cotton and corn.

According to AgFax newsletter, more than 3 inches of rain fell in some spots. AgFax reports in the southwest Panhandle, Muleshoe received 3.42 inches and Dimmitt caught 2.66 inches. Amarillo recorded up to 1.35 inches, 1 inch fell in Pampa, 0.39 in Dumas and 1.54 in Stratford. Lubbock recorded from 0.82 to 0.88 of an inch, while Plainview rejoiced over 1.83 inches and Abernathy received 1.32 inches.

“We received anywhere from 1.3” to 1.8” of rain,” Plainview, Tex. farmer Steve Olson told AgWeb on Tuesday.

Olson said more chances of rain were in the forecast, as the likelihood of him being able to raise a crop increased with the much-needed rains.

“It totally changed the game for us. I absolutely believed it saved some of our crop,” he says. “At least we have a chance to produce a crow now, before there was no hope.”

.70” in n NW Amarillo overnight! Some really good rain SW of Amarillo where it has been the driest! pic.twitter.com/Sop2cFMbdo

Prior to the rains this week, 90% of Texas was covered in drought, with the most severe conditions parked over West Texas and the Texas Panhandle. Nearly 29% of the state was in D4, the most severe level of drought.

With the cotton crop insurance cutoff looming, farmers in the area were still coming to terms with the impact the drought would have on their operation. While the recent rains aren’t enough to rid the area of drought, it’s now provided some relief.

“Hopefully this moisture will aid planted fields and help those waiting on moisture to get planters going,” Murilo Maeda, Texas A&M AgriLife Extension Cotton Specialist, Lubbock reported in the latest AgFax newsletter. “Across Texas, growers have continued to make progress. The latest USDA crop progress report indicates that 44% of the cotton acres are planted, up from 30% last week, with an estimated 8% already squaring.”

Farmers in the area had already changed their cropping plans due to the drought. One farmer told AgWeb they decided to switch from cotton and corn to more sunflowers, as that plant has a deeper tap root and could hopefully tap into any moisture left deeper underground. Other farmers were forgoing water on some crops and taking a very calculated approach to which crops they would even irrigate this year. However, with record-high diesel prices, even that decision was a costly one this year.

“Most of West Texas remains exceptionally dry. Hopefully, this week’s rains will reduce that trend. Growers that did not apply residual herbicides pre-plant or at planting must rely on post-emergence control on weed flushes, which will likely come after the recent moisture,” Maeda said. “Growers should make their best effort to get weeds when they are still small to obtain the best results with post applications.”

The storms were a blessing in the form of rain, but it also brought severe weather. A massive tornado near Morton, Tex. which is 50 miles west of Lubbock, even shocked storm chasers. According to AccuWeather, the twister was just as wide as it was tall and was classified as a wedge tornado.

20 miles from my place pic.twitter.com/QLf3m9mhoQ

“Hail may have damaged early-planted fields west of Lubbock where a large tornado was reported,” said Maeda. “Growers have accelerated planting, as we approach the region’s first insurance deadlines. Those in northern counties are about a week before that deadline. Growers near Lubbock and further south have another two weeks to plant.”

Other areas of Texas also received rain this week, but not enough to rid the drought situation or fully restore outlooks for crop production this year.

“Earlier this month, Wall received about .03 of an inch, which was the only measurable rain we had received until Monday and Tuesday. Growers caught a few showers north into the Rolling Plains. But a lot of it came in hard and fast in thunderstorms. It didn’t restore much of their soil moisture,” says Reagan Roland, Texas A&M AgriLife Assistant Professor, Extension Agronomist, San Angelo. Both furrow and drip-irrigated guys could catch up with an inch of rain. There’s a good chance for more rain this week, which will certainly help our cotton outlook.

Drovers reports Amarillo, Tex., which has only received 1.5 inches of precipitation for all of 2022 through mid-May. Amarillo typically receives about 19 to 20 inches of rainfall annually. USDA’s May 16 Crop Progress report listed 76% of Texas pasture and range conditions as poor to very poor. The maps below show the comparison of drought designations in Texas for 2022 and last year.

The recent cover story in Drovers posed a looming question going forward: is if the beef cowherd will be reduced back to a level similar to 2014, which was 29.08 million head. The size of the herd then reduced available feeder cattle supplies and led to record prices for both feeder cattle and fed cattle.

“Over a six-year period from 2009 to 2014 we reduced the beef cowherd by about 3.5 million head, some of which was caused by drought and some of which was caused by economics,” Kansas State University economist Glynn Tonsor told Drovers. “Is it possible we’ll take another million cows out of the inventory? Absolutely it’s possible, and I believe it’s at least a 50/50 chance that it will happen in the next two years. But it will be because of a combination of drought and increased costs that are not directly part of drought.”

The latest Cattle on Feed report showed April feedlot placements were expected to fall 4.6% below the comparable year-ago figure, but USDA estimated placements down just 0.9% from last year. April marketings at 1.893 million head (down 2.2% annually) essentially matched expectations for a 2% drop. The May 1 feedlot inventory was 11.967 million head, up 2.0% from last year, whereas a 1.3% year-to-year drop was anticipated.