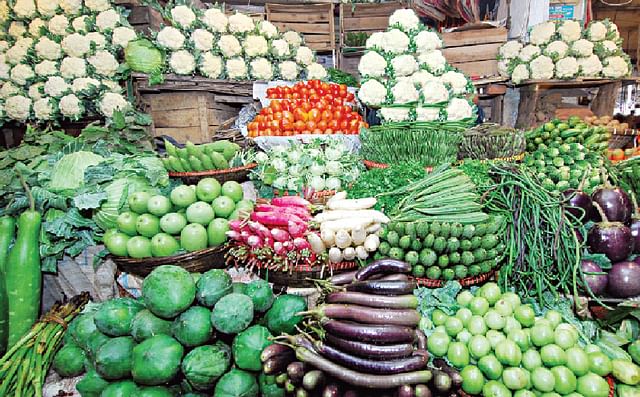 Locally produced vegetables are being supplied to different parts of the country every day from Tarakandi Bazar of Pakundia Upazila of Kishoreganj. It is known as one of the largest vegetable markets in the district. The market has been buzzing with buyers and sellers since morning.

Farmers from different villages of the upazila bring vegetables to this market. According to market traders, vegetables worth crores of rupees are sold here every day. Apart from Kishoreganj, wholesalers and retailers from different districts including Narsingdi, Gazipur, Mymensingh, Netrokona and Sylhet districts collect these vegetables. Besides, some traders and wholesalers of Dhaka buy vegetables froAbul Kalam, a local vegetable grower, said that vegetables worth crores of rupees are sold in this hundred year old Tarakandi vegetable market every day. If the market management is good, there will be more buyers and sellers. Besides, the farmers here would have benefited if the government had used technology to preserve the produced vegetables.

In the last one and a half decades, the roads here have improved. As a result, farmers have become interested in vegetable cultivation. Because of the development of roads, the vegetables produced by them are being easily transported to different places. Communication with Gazipur and the capital has become easier. Both buyers and sellers are benefiting from this. Apart from this, various banks have come forward to provide loan assistance to the farmers of the area so that they can cultivate in time and without any hindrance. However, they said that the farmers would have benefited more if the loan was made easier. And if necessary steps are taken, it is possible to export vegetables from here.m Tarakandi market. Every day the market starts in full swing from six in the morning and lasts for three to four hours.
Recently I went to the market and saw a huge vegetable market surrounded by banyan trees near the mosque on the east side of the market. All kinds of vegetables including tomato, coffee, eggplant, gourd, squash, bean are available in this market since morning. All kinds of vegetables are available here at reasonable prices. Different types of vegetables are cultivated in this upazila throughout the year.

It can be seen that the sold vegetables are being packed in autorickshaws, tomtoms, pickups and trucks. Wholesalers from far and wide have brought autorickshaws, pickups, trucks to buy vegetables. Vegetable traders said that Pakundia is a famous area for vegetables in the district. When winter comes, the supply of vegetables in the market increases. However, the traders said that the vegetable traders and farmers would be more benefited if the government took steps to make the vegetable storage and marketing easier.

Nazrul Islam, a local vegetable grower, said buyers and sellers suffer a lot due to lack of space in the market. He demanded the concerned people including the administration to keep the tradition of this famous market which has been going on for ages.

Farmers here say that 25-30 years ago, there were not many vegetables here. At that time paddy, jute and sugarcane were usually cultivated in this area. Now the opposite has happened. They have been attracted and motivated towards vegetable cultivation with the help and advice of Agriculture Department officials and agricultural workers. With the overall cooperation of the Department of Agriculture and the relentless efforts of the farmers here, a revolutionary change has taken place in agriculture. This change has brought a lot of changes in their standard of living. Those who once had linen houses now have tin houses. Many people have built semi-ripe houses by cultivating this vegetable. Their children are now going to school.