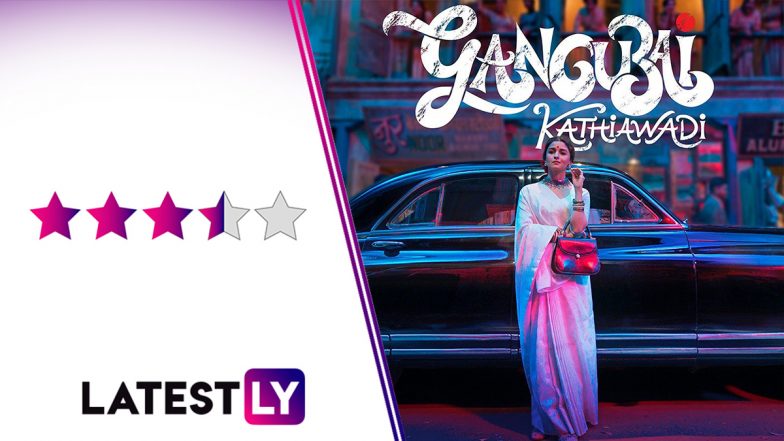 Gangubai Kathiawadi Movie Review: Over the years the SLB brand has become synonyms with creations that are majorly recognised and appreciated for the grandeur, the opulence and the meticulous details that have been consistently written about, and thoughtfully archived. Director Sanjay Leela Bhansali doesn’t structure frames, he paints everything to artistic perfection. If you observe his last five offerings mindfully, you would realize that there are no recurring motifs but recurring visual masterpieces instead with utmost attention reserved for aesthetics alone. Gangubai Kathiawadi: Full Jukebox Of Sanjay Leela Bhansali’s Film, Starring Alia Bhatt, Out Now; Here’s How You Can Listen To All Songs From The Melodious Album.

In that sense, you know what one would expect from his recent endeavour Gangubai Kathiawadi which centers around the notorious prostitute of Kamathipura with a heart of gold, played by the ever so dependable Alia Bhatt. So the only yardstick one could probably bear in the mind, as one walks into the darkroom, is what comes organically with the SLB logo itself. And the maverick filmmaker delivers one more time, and how! This time around, Bhansali dishes out cinematic brilliance with much expected emotional chords that would expectedly strike well and go along with the narrative. Equipped with Aalia’s versatility, her reassuring screen presence, and the proverbial range she is known for, Bhansali gives us a visual delight that has its heart at the right place.

“Charcha nahi badlaav chahiye” (I seek transformation, not mere discussions) quips Alia Bhatt’s ferocious character in a scene when a politician decides to cash in on Gangubai’s ever-growing popularity to drive his own agenda. Much like that line from the film, one senses that Bhansali uses his evocative visuals and his exceptional storytelling ability to bring about change in terms of technicality or narrative or both. He certainly knows the might of moving images which he further decorates with details that are almost impossible to match. He uses subplots, the dialogues and the background score to drive home some important points. Gangubai Kathiawadi: Vicky Kaushal Is Impressed With Sanjay Leela Bhansali’s Leading Lady Alia Bhatt’s Performance in the Film!

So there’s no ruthless or unnecessary male-bashing, no over-feminism on display and no hard-hitting gender tussle. All these elements could have been woven in a more-in-your-face mannerism into the sequences. But the film resorts to employing some clever remarks to serve the purpose in a more effective way. Sample this: when an over-enthusiastic Gangubai gears up for her first-ever public speech she intends to address the crowd as ‘my brothers and sisters’, her fellow sex worker starts giggling like a kid after hearing the word brothers. “Brothers” really? she retorts!

From the dimly lit lanes of Kamathipura to the ‘oddly’ clad sex workers and from the musty walls of brothels to hustle-bustle of the city streets where flesh is sold so casually, the film shows details more artistically without venturing into the muck of it. The color palette and the texture remain consistent, so much so that Bhansali gives you 50 different shades of the color white and verbalizes their significance with the help of a line or two as well. You end up knowing how Gangubai’s Hans Wala White (the Swan White) transforms into a shade that is rechristened after her own name in the end. Amidst all this color coding and decoding, the film switches emotions along with the shades and infuses various subplots to keep you hooked. Gangubai Kathiawadi: Ajay Devgn Delivers Some Impressive Dialogues As Rahim Lala That Will Make You More Excited for the Film (Watch Video)

There’s no dull moment in Gangubai Kathiawadi even as the maker is madly involved in getting the interplay of lights, the shadows, and the settings (or the intricate work on the saris for that matter ) on point. In this artistic canvas, Alia brings her most compelling game to the fore. Watch the romantically playful car sequence where Aalia demonstrates to her lover the various emotions of love as well as lovemaking. Wild, raw, sensuous or dare I say even slutty-Gangubai can explore any shade without compromising on her dignity and the lack of the warmth of genuine love is a complete no-no. Watch Alia as she touches upon the extremes of the spectrum and emotes it all so beautifully!

Fairly expected, not so promising with its music but highly emotionally charged, Gangubai Kathiawadi works and leaves you satiated with a cinematic treat with powerful undercurrents of how societies and sexualities and structured and even forced on us at the cost of innocent lives that deserve respect and justice above all. Little Girls Mimicking Alia Bhatt’s Gangubai Kathiawadi Brothel Manager Character In Viral Videos Criticised, Priyanka Chaturvedi Leads Netizens In Slamming The Viral Trend!

As for the performances, Alia mixes vulnerabilities and powerful traits of the character to root for her exceptional talent. Seema Bhargava Pahwa’s madam Sheela as the head of the brothel is constructed in broad strokes and it works! Ajay Devgan as Karim Lala is powerful. Vijay Raaz as Gangubai’s nemesis and Jim Sarbh as a journalist turned Gangubai’s well-wisher stand out with their performances. A special mention here for Shantanu Maheshwari for the ease with which he has portrayed Gangubai’s coy lover and Indira Tiwari as Gangubai’s best pal shines as well.

All in all, Gangubai Kathiawadi is a brilliant extension of the spaces that Bhansali creates where movies become a cinema and he doesn’t fail to give you an immersive experience even if his universe remains fantastically arty!

(The above story first appeared on LatestLY on Feb 25, 2022 09:57 AM IST. For more news and updates on politics, world, sports, entertainment and lifestyle, log on to our website latestly.com).