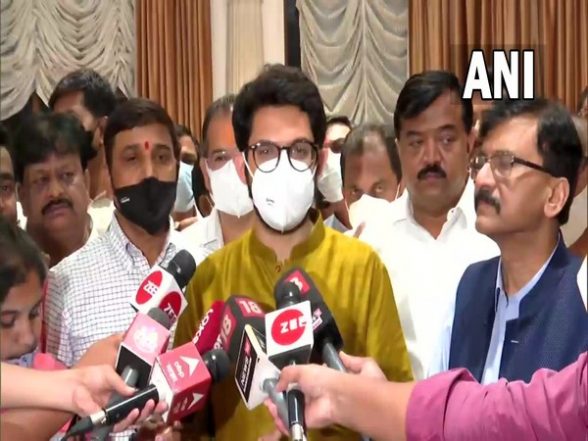 India News | An Evacuation Plan Should Be Made Immediately, Says Aaditya Thackeray on Indian Stranded in Ukraine

“An evacuation plan should be made immediately. We all have demanded from the Central government to bring our citizens back from Ukraine,” said Thackeray.

He further added that “he believes that the government will plan something and inform us (state governments) accordingly.”

Meanwhile, Indian embassies in the neighbouring countries of Ukraine have organized massive evacuation operations for the Indian citizens.

The Indian Embassy in Warsaw issued an urgent advisory for its citizens who desire to be evacuated via Poland and said, “Indian nationals arriving at the Poland-Ukraine border by public conveyance i.e. by bus or taxi, are advised to make for the Shehyni-Medyka border crossing, not Krakowiec crossing.”

The Ministry of External Affairs Camp Offices are now operational in Lviv and Chernivtsi towns in western Ukraine. Additional Russian-speaking officials are being sent to these Camp Offices.

Officials are assisting Indian citizens who reach these cities and will facilitate their departure from Ukraine through adjoining border crossings.

A group of around 40 Indian medical students of Daynlo Halytsky Medical University, Lviv walk towards the Ukraine-Poland border for evacuation. They were dropped around 8 km from the border point by a college bus.

Also, the Embassy of India in Bratislava has stationed officials at the Slovak-Ukraine border to provide essential assistance to Indian nationals who might cross over to Slovakia from Thursday.

In his telephonic conversation with Russian President Vladimir Putin on Thursday, PM Modi also sensitised him about India’s concerns regarding the safety of the Indian citizens in Ukraine, especially students, and conveyed that India attaches the highest priority to their safe exit and return to India. (ANI)