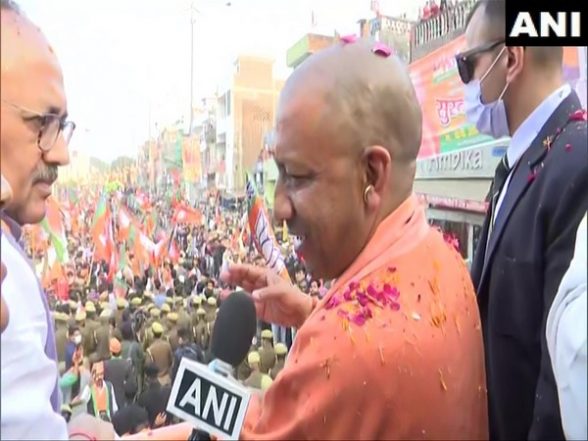 India News | Opposition Leaders Know They Will Lose UP Polls So They Booked Tickets for Abroad: Yogi Adityanath

“They (Opposition) have already made arrangements for their foreign escape on March 11 (one day after the declaration of results), they have booked tickets because they know the result,’ Adityanath told ANI during a roadshow in Prayagraj.

Claiming that the offices of Samajwadi Party and Bahujan Samaj Party are already empty since they are aware of the results, Adityanath said “Ghosts have started dancing in their offices.”

Reacting to Samajwadi Party chief Akhilesh Yadav’s “Baba Bulldozer” jibe, Adityanath said, “Bulldozer is a symbol of our (BJP’s) development and also a way to create fear in the mafia.”

The BJP leader further added that the BJP will cross the mark of 300 assembly seats in the ongoing polls and will once again form the government.

The seven-phased UP Assembly polls are underway in the state and the fifth phase, which is scheduled on February 27, will majorly cover the eastern region, including Ayodhya, Rae Bareli, and Amethi districts.