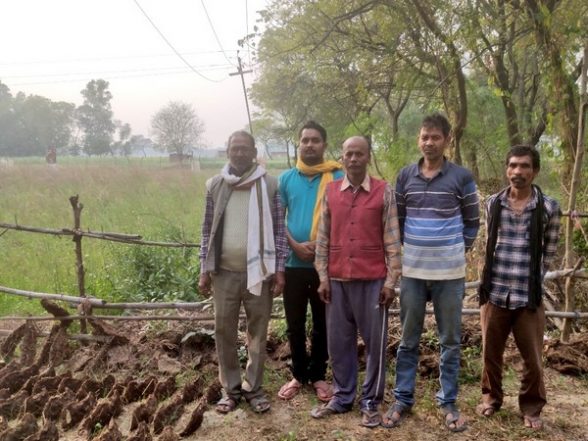 As people of this constituency depend mostly on farming for their livelihood, they do not hide their emotions while sharing their day-to-day struggle. The issues of stray cattle menace, fertiliser, electricity add to their miseries.

In the Amethi’s block office at Awas Vikash colony, the queue for the fertilizers crosses more than 1.5 km and remains unsure whether all farmers will get it or not.

Satyendra Kumar, whose family does cultivation of wheat and rice on 5 bighas, said, “The block office should come up with a system where they can add at least another two centres for fertilizer distribution rather than just one. In this manner, the distribution will be fine and farmers won’t have to come from far and return empty hands. From this, every small farmer will be benefitted.”

Many farmers here said that those who are a little well off compared to others end up buying the fertilizers and the small farmers are left with no option other than buying it from private shops.

A farmer from Keolapur village in Amethi district, Ram Manohar said, “Even if we do not get the fertilizer despite standing in the queue, it is still fine for us but farmers coming from far away villages face real difficulty. For them, there is no other option but to buy it from private shops at a higher price.”

In a bid to get the fertilizer, the farmers start quarrelling with each other.

Normally, the government rate of fertilizers is Rs 270 per gunny bag that contains 45 kgs whereas the cost for the same fertilizers costs Rs 410 at private shops, according to farmers.

“I just bought fertilizers for Rs 1,500. What shall we do? Shall we eat or shall we spend everything on farming? Moreover, the stray cattle menace continues. It seems like we are ploughing for the animals to eat,” said Radheshyam, another farmer who grows wheat and rice on his 2.5 bighas in Bhagoria village.

“We do not feel like farming anymore. There is neither profit nor our savings are left. The stress of repayment of the loan is looming round the clock,” Radheshyam added.

With the increasing worry of stray cattle that regularly eats the crops, farmers here have stopped the cultivation of chickpea and pea because of cow, ox, wild boar. Animals also break in the wooden longs placed as barricades to avoid entry of these strays in the field.

Shyamlal, another farmer from the same village who owns 4 bighas of the land, said, “Throughout the day, we stay in the field, cultivates the crop and at night, we keep our torch ready and at every interval or with the slightest sounds runs to check if any animal is damaging our crop or not.”

According to the district’s official site, Amethi has 1,000 villages, four tehsils, 13 blocks with a population of 18,67,678. There are four assembly constituencies under Amethi district, that is, Gauriganj, Tiloi, Jagdishpur (Reserved) and Amethi.

Out of these, the BJP had won three seats in 2017, while the Samajwadi Party had won one seat from Gauriganj.

This time the candidates are Ashish Shukla from the Indian National Congress, Sanjay Sinh from the BJP, Maharaji Prajapati from SP, Ragini Tewari from the BSP and Anurag to contest from the AAP from the Amethi constituency.

Polling has been held in four of seven phases of assembly polls in Uttar Pradesh. Voting for the remaining phases will be held on February 27, March 3, and 7. The counting of votes will take place on March 10. (ANI)