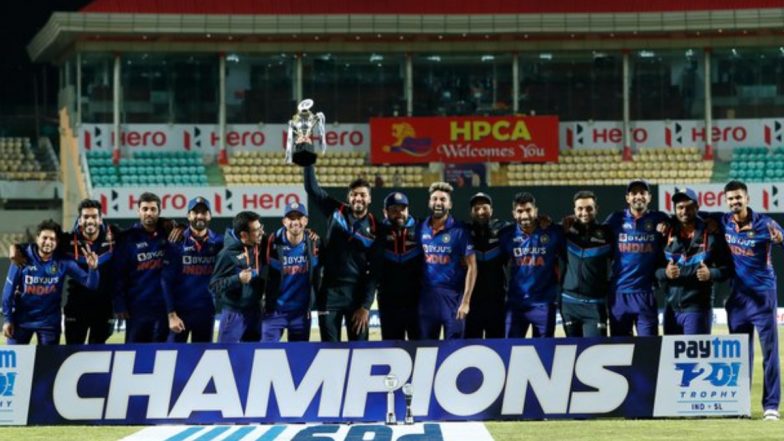 India produced a clinical all-round performance to beat Sri Lanka by six wickets in the third T20I to complete the 3-0 clean sweep, at the picturesque HPCA Stadium. With this win, India extended their winning streak to 12 matches in T20Is.  After winning the toss and opting to bat first, a fighting fifty from skipper Dasun Shanaka (74 not out off 38) helped Sri Lanka post 146/5 in 20 overs. India Beat Sri Lanka by 6 Wickets in 3rd T20I, Win Series 3-0.

The likes of Avesh Khan (2/23), Mohammed Siraj (1/22), Harshal Patel (1/29), Ravi Bishnoi (1/32) picked wickets at regular intervals to keep Sri Lanka on the backfoot before Shanaka played a solid knock to help his post a fighting total.

Continuing his superb batting form, Shanaka took matters on his own and played an counter-attacking knock, stitching an unbeaten 86-run stand with Karunaratne. And even in that stand, Shanaka was the aggressor because Karunaratne (12 off 19) hardly timed a ball. Overall, Sri Lanka made a remarkable recovery and posted a challenging total of 146/5 in 20 overs. Meanwhile, you can check stat highlights of 3rd T20I below.

# This was India’s 17th win over Sri Lanka, most wins against an opponent in T20Is.

# This was India’s 12th consecutive win in T20Is, joint-most.

# Rohit Sharma played his 125th T20I match, the most by any player.

In reply, Shreyas Iyer continued his sizzling form and smashed third consecutive fifty (73 not out off 45) of the series while the likes of Ravindra Jadeja (22 not out off 15), Deepak Hooda (21 off 16), Sanju Samson (18 off 12) also contributed well with the bat as India chased down the target in 16.5 overs. Lahiru Kumara (2/28) was the most successful bowler for Sri lanka.

(The above story first appeared on LatestLY on Feb 27, 2022 11:24 PM IST. For more news and updates on politics, world, sports, entertainment and lifestyle, log on to our website latestly.com).