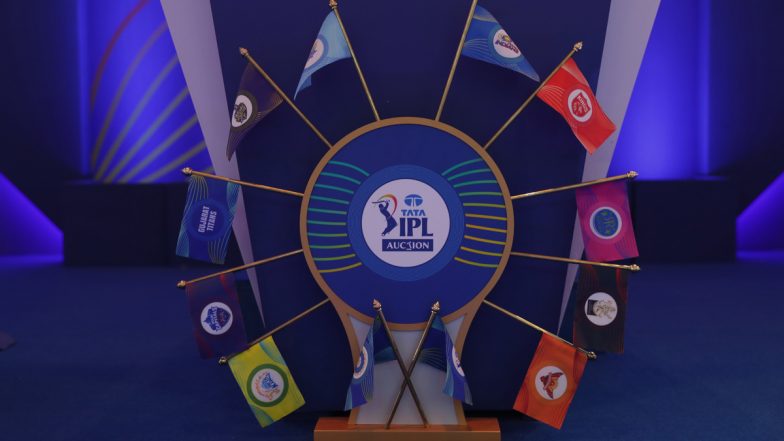 New Delhi, February 24: The 10-team Indian Premier League 2022 will kick off on March 26 and the final will be played on May 29, the league’s chairman Brijesh Patel confirmed after the governing council meeting on Thursday.

The meeting, held virtually, also decided that the league phase of the IPL will be staged in Maharashtra, with 55 games in Mumbai and 15 in Pune. As reported earlier, four stadiums have been identified for the league matches, with the break-up of the games being 20 at the Wankhede, 15 at Brabourne Stadium, 20 more at DY Patil Stadium and finally 15 at Maharashtra Cricket Association (MCA) ground in Gahunje, in the outskirts of Pune. IPL 2022 Schedule: Upcoming Season to Start on March 26, Final on May 29; Confirms Brijesh Patel.

The Governing Council also decided that the tournament will allow crowds to attend the matches, subject to permission from the Maharashtra government. “The IPL will kick off on March 26, the full schedule will come soon. We will also have crowds but as per the policy of the Maharashtra government. Whether it will be 25 or 50 per cent of the stadium capacity will be decided by the government instruction,” the IPL chairman Patel told Cricbuzz.

As for the playoffs, which will feature four matches, the IPL has decided to keep its venue options open for now. When asked about it, Patel said, “We will decide about the play-offs later.”

Notably, this is the first time the BCCI have categorically stated that the league will not go overseas. There were plans to explore overseas venues, like South Africa and Sri Lanka, but the improved Covid-19 situation in the country has encouraged the BCCI to hold the 10-team league in India itself.

As per IPL chairman, the exact number of days and full schedule of the league will be released soon. The board has also identified four grounds for practice. The teams will be allotted times for practice at the BKC ground in Bandra Kurla Complex in Mumbai, Brabourne Stadium in South Mumbai, DY Patil ground in Navi Mumbai and either MCA Ground in Kandivali or in Thane.

Meanwhile, the Governing Council also backed the idea of bringing back the Women’s T20 Challenge, which last took place in 2020. The format is likely to be the same as in the 2020 edition, in which three teams – Supernovas, Velocity and Trailblazers – played a total of four matches including the final.

The Women’s T20 Challenge usually takes place during the IPL’s playoffs week. However, no firm decision has yet been taken on whether the women’s tournament will take place at a separate venue – as in 2020 – from the IPL play-offs.

The tournament will still have to wait before it expands to become a fully fledged Women’s IPL, however, with BCCI president Sourav Ganguly saying recently that the board was at the level of “formulation” to launch it in 2023.

(The above story first appeared on LatestLY on Feb 25, 2022 12:02 AM IST. For more news and updates on politics, world, sports, entertainment and lifestyle, log on to our website latestly.com).