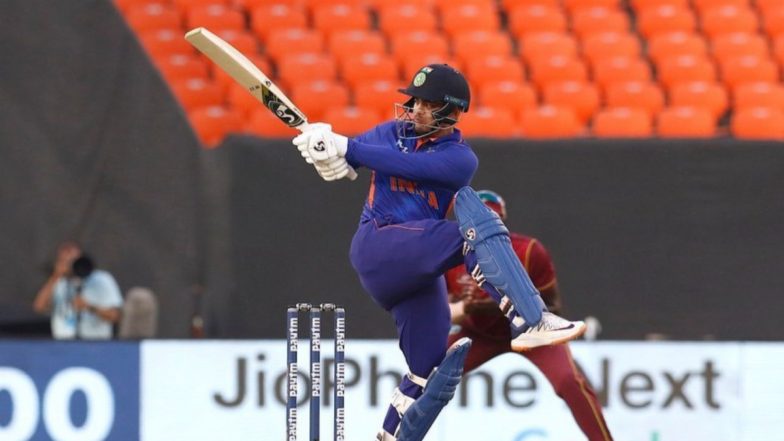 Dharamsala, February 27: India opener Ishan Kishan was admitted to a city hospital and underwent a brain scan after being struck on the head during the second T20I against Sri Lanka here. Kishan, who made 16 from 15 deliveries on Saturday, was hit on the head by a Lahiru Kumara bouncer in the fourth over during India’s chase.

The wicketkeeper batter had removed his helmet immediately after the blow before India’s medical team ran to the field for the concussion test. “Ishan Kishan was admitted to Fortis Hospital for brain scan after being hit on the head by Lahiru Kumara bouncer,” a BCCI source told PTI.

“He stayed overnight at the hospital as a precautionary measure.”

The BCCI is awaiting the scan result as Kishan is expected to be back in the Team hotel. However, there is a chance that the Southpaw might be rested for the final match of the series here on Sunday. Virat Kohli’s 100th Test Match Will Be Behind Closed Doors Due to COVID-19, Says Punjab Cricket Association.

In that case, either Mayank Agarwal or Venkatesh Iyer can open the batting alongside skipper Rohit Sharma. Batters Ruturaj Gaikwad and Suryakumar Yadav and pacer Deepak Chahar are already out of the series with injuries. India already have the three-match T20 series in the bag having won the first and second matches by seven wickets and 62 runs respectively.