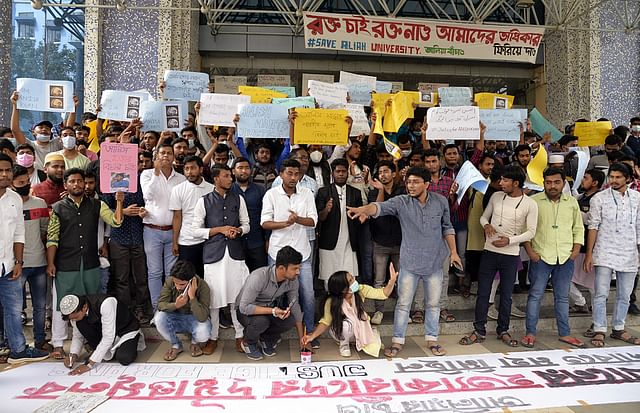 The West Bengal government is temporarily expelling three members of the police force four days after they were accused of ‘murdering’ Anis Khan, a former student and student leader of Kolkata’s Alia University. One of them is a police officer with the rank of officer.

On the other hand, various political organizations have staged demonstrations and processions in the streets of Kolkata demanding justice for those involved in Anis’ death.

According to police sources, a sub-inspector, a constable and a home guard were among the four members of the police who were expelled on Tuesday morning. All three were working in Amta Thana area of ​​Howrah district. They were patrolling the area adjacent to Anis’s residence when Anis mysteriously died last Friday night. That night, Anis Khan, a leader of the movement against the National Register of Citizens (NRC), fell from the roof and died.

Anis’s death has now become a major political issue in West Bengal. Chief Minister Mamata Banerjee has formed a Special Investigation Team (SIT) to probe the incident. However, Anis Khan’s family has demanded an investigation by the Central Bureau of Investigation (CBI).

Besides, Indian Secular Forum (ISF) MLA Nowshad Siddiqui claimed that they were trying to form a student organization with Anis as their leader. On the other hand, Sourav Prasad, state president of Chhatra Parishad, a student wing of India’s oldest party Congress, has claimed that Anis Khan has been a member of their party since August 2016.

Left parties, including the Communist Party of India Marxist (CPIM), are the most active on the issue. Srijan Bhattacharya, state secretary of the SFI, a student wing of the CPIM, claimed that the united front of the Left Front and the Congress was formed in the Assembly elections; Anis was seen on the stage at the rally of that front. Srijan Bhattacharya said, “The claim made by the Chief Minister is completely untrue. Anis was one of our members. ‘

The largest rally since Anis’s death has been carried out by a left-wing political organization. An organization called ‘Students Against Fascism’ organized a big procession in Kolkata on the occasion of Ekushey February Language Day. In the front row of the procession, the left leadership was seen holding a large banner, next to a picture of Anis, which read, “Dyed in my brother’s blood.” More than a thousand people took part in the procession.

Meanwhile, students of Alia University today staged a procession to protest the ‘murder’ of Anis Khan and demand punishment for the culprits involved in the incident. Activists claim that Anis Khan’s ‘murder’ is a new chapter in a series of attacks on minorities. When the procession reached Central Kolkata, the police dispersed them by charging batons.