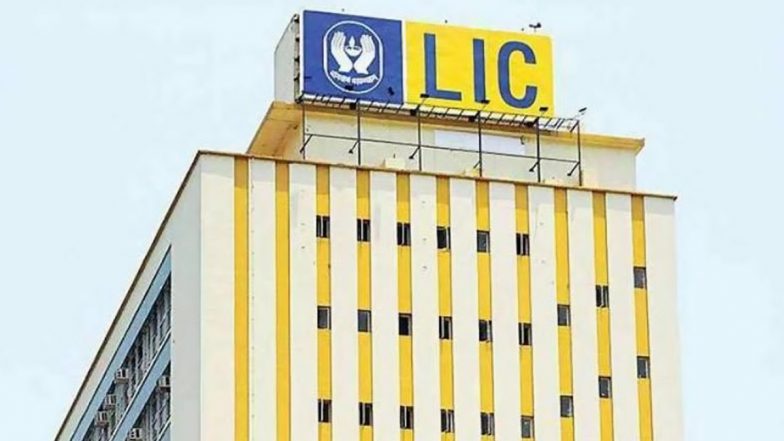 Chennai, February 14: The Life Insurance Corporation of India (LIC) said that it is not in compliance with the sectoral regulator’s stipulation regarding certain investments in its pension, group and life annuity funds. Further the loss to be transferred to the Shareholders Account on account of its ‘Other Investments’ may grow higher than Rs 5,365.83 crore in the future.

The LIC in its Draft Red Herring Prospectus (DRHP) has said the Insurance Regulatory and Development Authority of India (IRDAI) has stipulated that pension, group and life annuity funds to be invested in “Approved Investments”, which include Central government securities, state government securities and other approved securities. LIC IPO: Draft Papers Filed With SEBI, Likely to Raise Up to Rs 63,000 Crore From 5% Stake Sale.

The life insurer said if investments no longer meet the criteria laid out for being considered Approved Investments, they are re-classified as ‘Other Investments’. The insurer is then required to ensure that such downgraded securities do not continue to be part of the pension and group and life annuity funds within a period of 90 days of such re-classification.

After expiry of the 90-day period, if such downgraded securities continue to be categorised as other investments, the value of such securities is required to be made good by transfer to the insurer’s shareholders’ funds at the amortised cost of such securities in the books of such insurer.

According to LIC, as at September 30, 2021, it had other investments of about Rs 11,289.36 crore (Rs 24.74 crore in equity and Rs 11,264.62 crore in debt instruments) forming part of the pension and group and life annuity funds that had not been transferred after 90 days of becoming other investments.

The market value of the equity investments of Rs 24.74 crore was Rs 9.48 crore. Out of the debt investments of Rs 11,264.62 crore, Rs 5,914.03 crore was standard debt in respect of which all dues are paid. The remaining Rs 5,350.58 crore comprises non-performing assets, which stands fully provisioned in the policyholders’ funds as at September 30, 2021.

The loss that would have accrued in the profit and loss account (Shareholders Account) had these investments been transferred to the Shareholders’ funds at amortised cost was Rs 5,365.83 crore as at September 30, 2021.

“While our Corporation undertook reasonable efforts to dispose of securities that were re-classified as other investments, such securities could not be sold in a commercially reasonable manner due to the inadequate appetite of the secondary market to acquire the securities offered in large quantities, which resulted in the market values of such securities being highly compressed,” the LIC said in DRHP. Hence LIC is required to ensure that these investments are transferred to the Shareholders’ funds at amortised cost, which the life insurer is yet to undertake.

The market value of the applicable other investments may decrease and the loss that will accrue in the profit and loss account (Shareholders Account) when these investments are transferred to the Shareholders’ funds at amortised cost may be more than the loss noted above and to such extent Shareholders’ funds would stand reduced. The DRHP was filed with the Securities and Exchange Board of India (SEBI) on Sunday.

(The above story first appeared on LatestLY on Feb 14, 2022 11:51 AM IST. For more news and updates on politics, world, sports, entertainment and lifestyle, log on to our website latestly.com).