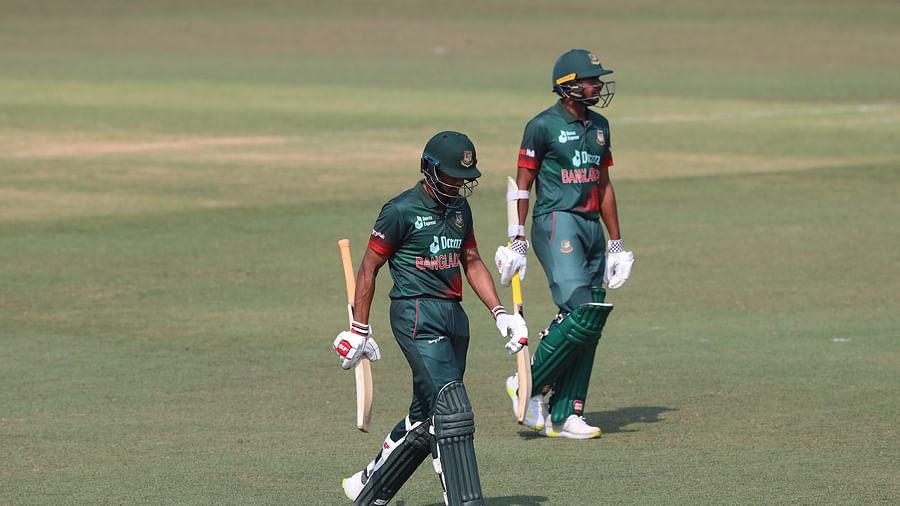 Liton did not go, what did Mahmudullah do

First of all congratulations to Liton Das.

The fall of a wicket can be a plague!

After winning the dazzling century in the previous match, the Bangladesh opener was on the way to the century after surviving once today. The fact that he was not LBW in the review of the third ball of the third over will spread controversy.

It was clear that he wanted to bat deep in the innings. After passing 35 overs, Sarlen did the job well. Bangladesh were then unbeaten on 112 for 4 and Liton was unbeaten on 7 off 111 balls. At the other end of the innings, Mahmudullah is an experienced batsman. However, he seemed out of tune with 9 runs off 19 balls.

Liton is back out
Liton is back outPhoto: Prothom Alo
That could happen. How many people are like that at the beginning of the innings. It is possible to compensate later with experience. And after the second match, Liton assured everyone that ‘we too have become seniors’ and everyone was hoping that the end would be better. But the nightmare started from the next over.

Who knows what happened, why Liton swept Mohammad Nabi in the fifth ball of the 36th over, and why he did it, or why he picked it up, the explanation will probably be found only in Liton. There is one more explanation. If the batsman is ‘set’ on the wicket, he will play such a shot. You can also be out.

And this is where the issue of Mahmudullah comes up. After Liton’s return, Mahmudullah was the one who had the confidence to cross the rest of Bangladesh’s innings.

After seven years in international cricket, Liton forgot to see such a plague in Bangladesh, that moment is very important. If he had a little more, he would have scored a century and with the passage of forty overs, the ‘tail’ would not have come out in the innings of Bangladesh.

But then who knows the skill of batting with bowlers better than Mahmudullah in Bangladesh team?

Mahmudullah’s legs are moving less now? When Liton was out, Mahmudullah was unbeaten on 11 off 21 balls with a strike rate of a little over — 50. Playing 21 balls in this last part of the innings means good ‘set’ but could not get the run out. The difference was obvious: Rashid-Mujib and Nabi were played by Liton using his feet, batting for space and getting runs with cover, points, midwicket and two ends of the bowler ‘V’.

Mahmudullah’s innings of 29 off 53 balls is therefore questionable. No boundaries! If he could not get out one or two, he could have killed. Or it was understood, he was under pressure to take quick wickets. But after Bangladesh lost 6 wickets for 16 runs in 43 overs? What did Mahmudullah think about Shariful and Mostafiz and scored one run in the middle of the over?

Simple number: An experienced batsman who has played 2033 matches, after playing 46 balls in this innings, he will give as few strikes as possible to the two tail-enders and try to score quick runs on his own. Still?

Mahmudullah was desperate to score at the end of the 47th over. Then the strike will match in the next over. Mahmudullah ran out of the crease pushing the ball. Otukui was enough for Mujib Ur Rehman to get Shariful ready for the run. Runout on direct throw.

There are no 4 wickets for 34 runs in the next 8.5 overs from 40 overs. Mahmudullah has played 21 balls and 12 runs out of these 53 balls. If you want, the account can be increased a little more. Bangladesh’s innings lasted 11 overs after Liton was out. Out of these 6 balls, playing 32 balls, Mahmudullah collected 18 and took 5 wickets.

The wicket will fall at the end of the innings, but the finishers have to run fast!