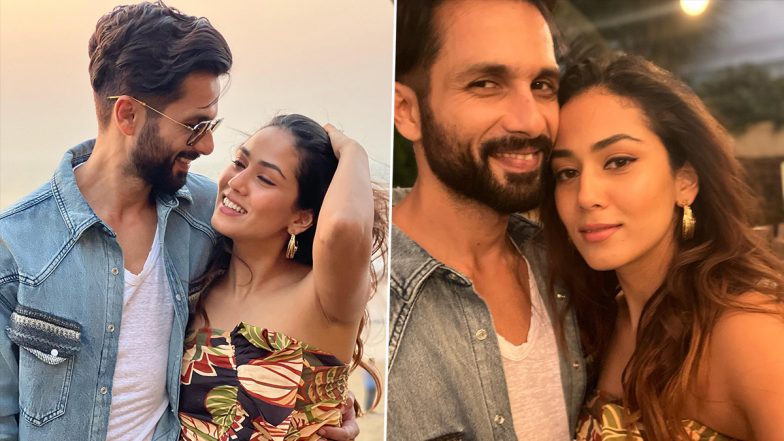 Mira Kapoor, who celebrated her husband and actor Shahid Kapoor’s birthday on Friday, shared a series of adorable sunset pictures with her better half from the birthday bash. In the pictures, we can see her wearing an off-shoulder floral dress paired with big golden hoops. On the other hand, Shahid sported a white t-shirt with a denim jacket over it. The duo looks affectionate in the snaps. On Shahid Kapoor’s Birthday, Wife Mira Rajput Wishes Her Man by Sharing His Breathtaking Pics Online!

Sharing these photographs, she captioned, “To many more sunsets together.”Mira also shared a snap in which brothers Shahid and Ishaan Khatter could be seen posing in a cute way. “Someone explain this,” she wrote.Ishaan’s rumoured girlfriend and actor Ananya Panday also joined the family for the birthday celebration. The ‘Gehraiyaan’ actor took to her Instagram Story and shared a picture with the birthday boy. She wrote, “Happy Birthday Sash! Bestestest!”

Mira also shared pictures with Ananya from their get-together on Instagram.Paparazzi also clicked Ishaan and Ananya as they were leaving in the same car.Ishaan donned a green shirt and blue denim, while Ananya wore a short white floral dress with sneakers. Rumoured couple Kiara Advani and Sidharth Malhotra were also spotted outside Ishaan’s residence. The ‘Shershaah’ actor looked handsome in a check shirt and baggy pants, while Kiara looked stunning in short white attire paired with a blue blazer.

Shahid’s co-star Mrunal Thakur from ‘Jersey’ was also spotted at the birthday bash. She posted a selfie and penned a heartfelt note for her co-star.She wrote, “Happy Birthday @shahidkapoor. Thank you for being a kick-ass co-star and a kick-ass friend! Continue to shine more and more and more every day! Love hugs and goofiness to you, always!” Shahid Kapoor Birthday Special: 8 Hit Movie Dialogues of the Jersey Actor as He Turns 41!

Talking about the work front, Shahid will next be seen in ‘Jersey’ alongside Mrunal Thakur. The film is all set to release on April 14. Besides this, he also has an untitled action film directed by Ali Abbas Zafar. He will also be seen in Raj Nidimoru and Krishna DK’s digital thriller drama and ‘Bull’ which will arrive in cinemas in April 2023.