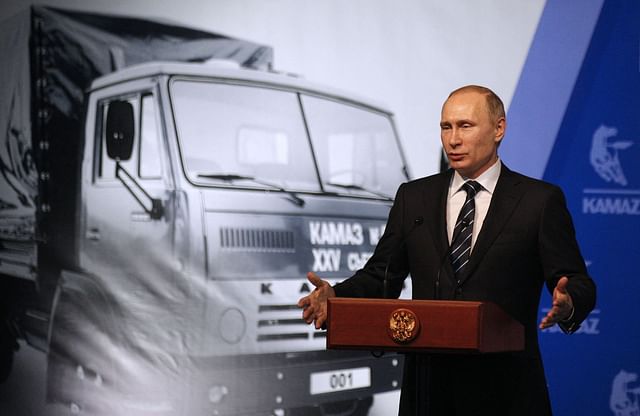 Victor, I received the last message from my former classmate in Kiev 24 hours ago. He said he had sent his wife and daughter out of town. He could have gone if he wanted, President Volodymyr Zelensky has said. “I am still strong, I have a lot to do in this war, I will not leave until the end,” wrote Victor.

Four days have already passed. It was thought that the Zelensky government would fall overnight, and Russia would withdraw its troops by forming a pro-Moscow government in its place. To speed up the process, Putin called on the Ukrainian military to take up arms immediately against the “Nazi and drug-addicted” Zelensky government. The Ukrainians did not listen to him and took up arms.

Victor wrote in Russian, ‘Vieru v Pabeidu Nasikh’; That is, ‘I believe in our victory.’
The reaction around the world to the Russian invasion of Ukraine is astonishing. The United States and members of the European Union have simultaneously imposed tough economic sanctions. Russian aircraft have been banned from entering European skies. FedEx suspends mail delivery to Russia Football players have refused to play with the Russian team. In New York, pro-Putin opera singers have been released. Canadian restaurant owners have even objected to the sale of Russian vodka. Most surprisingly, the protests inside Russia itself. Most of the big cities have been procession in the big cities by ignoring the blood clock, thousands of people have been brought to Tenai.

The reaction has so upset President Vladimir Putin that he has instructed his military to prepare for the use of nuclear weapons in retaliation. He argues that Western nations have imposed “illegal sanctions” on Russia and are using harsh and offensive language. He spoke in support of the US Alliance, but said that maintaining some independence was important for Iraq.

Russia is at the UN’s doorstep
Russia’s veto did not pass the draft resolution, which was tabled by the Security Council at its emergency session on February 25, condemning the Ukraine attack. But it became clear in the debate that there was no one on Russia’s side. Three countries, militarily and commercially, China, India, and the United Arab Emirates, abstained. The remaining 11 countries voted in favor of the resolution. Russia is chairing the Security Council this month. Ukraine has demanded that someone else fulfill this responsibility, but Russia has not agreed.

The issue will be discussed at the UN General Assembly on Monday and Tuesday as the Security Council failed to reach a decision on Ukraine. It may be recalled here that if the Security Council failed to accept any resolution on the Bangladesh question in 1971, the matter was similarly referred to the General Assembly. More than 70 countries have already expressed support for the meeting, which was convened at the request of the United States. “You can veto our proposal, but you cannot stifle our voice,” said Linda Thomas Greenfield, the US ambassador to the United Nations, pointing to her Russian counterpart.

Whatever resolution the General Assembly adopts on this question will be a recommendation, there is no obligation to implement it. But it could be embarrassing for President Putin if a large number of countries accept the condemnation resolution in protest of Moscow’s military decision.

All eyes are on China and India
For more than a decade now, the United States has been pursuing a so-called “look at Asia” strategy that sees China, not Russia, as its main rival. In retaliation, China and Russia, forgetting their old ideological differences, have sought to build closer ties. During the Winter Olympics in Beijing, President Putin and Chinese President Xi Jinping held hands and promised an “endless friendship.” As an energy-deficient country, China’s main interest is to procure essential gas and oil from Russia. Russia is investing লার 400 billion in the construction of a 400 billion oil pipeline from Siberia to Mongolia. If Europe imposes a ban on Russian gas and oil purchases, the deal could serve as an alternative economic “lifeline” for Moscow. The two countries also agreed to trade through the Chinese yuan instead of the dollar.

Due to its proximity to Russia, China’s role in the Ukraine issue is of interest to all. The New York Times reported that Washington had contacted Russia several times to ask for its influence, but there was no immediate response from Beijing. On the contrary, they have blamed Washington for spreading false propaganda about the war.

Although it has not backed the Security Council resolution, China has so far not directly supported Russia’s attack on Ukraine. The main point of his five-point proposal to resolve the crisis (https://bit.ly/3M1X3LH) is that China opposes the violation of the sovereignty and territorial integrity of any state, including Ukraine. Experts believe that it will not be easy for Putin to ignore international opinion and for China to be open-minded. Due to trade and technology, China is still dependent on the West in many ways. China’s trade with Moscow is only 2 percent of its total trade. The Jerusalem Post quoted Israeli sources as saying that so far China has not taken any significant steps to avoid Western economic sanctions. Russia has reportedly protested Russia’s attack on Ukraine inside China. Significantly, Beijing did not object to Chinese social media coverage of the protests.

On the other hand, in addition to the old friendship with Russia, India will also be interested in taking a neutral position on the Ukraine issue due to increasing military cooperation. As a member of the anti-China quad, India and the United States have forged strategic alliances, and Washington has sought India’s support on the Ukraine issue. The US Secretary of State has also spoken to the Indian Foreign Minister on the issue, but India has not agreed to direct criticism of Russia. Ukraine’s foreign minister, in his words, has “appealed for Modi’s support”. Like China, India has suggested resolving the issue diplomatically and peacefully. The reason for India’s hesitant attitude is its military dependence on Russia. More than half of the country’s arms imports come from Russia. India is also ahead of Russia in inventing anti-aircraft missile technology.

Bangladesh also has close relations with Russia. Moscow was on the side of Bangladesh in 1971. Even after independence, that relationship was not severed. I guess if a resolution is passed in the General Assembly condemning Russia, Bangladesh will take a neutral position like India.