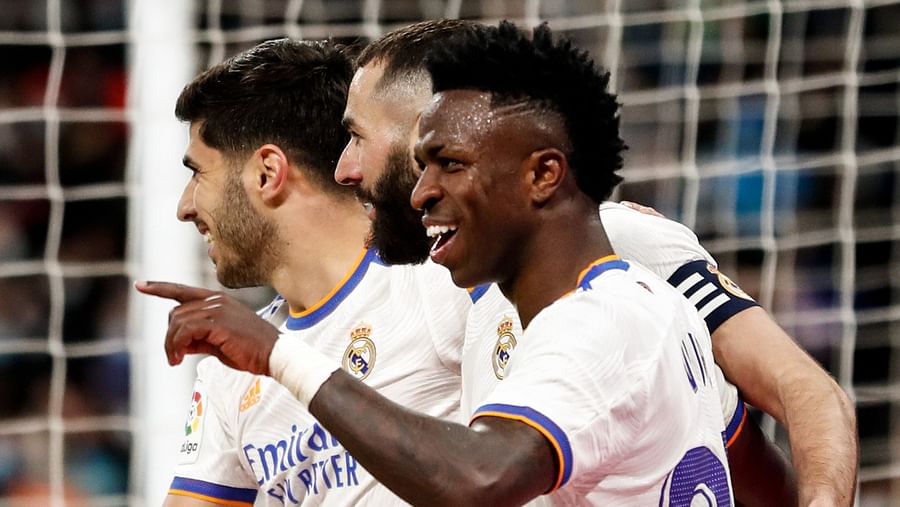 Real in the light of Benzema-Vinicius

After scoring two goals, maybe Karim Benzema thought, this time I should also score a goal. The French striker of Real Madrid got the goal in the very added time. Earlier, goals from Vinicius Jr. and Marco Asensio combined to win the La Liga match against Alaves 3-0.

Real Madrid did not play as well in the first half as it seemed at the end of the match. Vinicius and Benzemara created a couple of goal opportunities. But they were not exactly borrowed. On the contrary, before the break, Real felt a little dirty.

Celebrate Real’s victory
Celebrate Real’s victoryReal Madrid Twitter
From the beginning of the second half, however, a rhythmic Real Madrid was seen from the beginning. Alaves also lost the bait when he returned as the opponent. The first goal came in the 63rd minute of the match after several attacks. The Spanish forward put Real ahead with a great shot from about 20 yards out of Karim Benzema’s pass.

Benzema himself could have scored in the 7th minute. But his shot from Vinicius’ pass bounced back into the post. Four minutes later, Benzema himself gave a similar pass to Vinicius. Vinicius, who faded in the Champions League match against PSG, did not waste this opportunity anymore. He made it 2-0 with a well-watched shot.

Real Madrid is at the top of the league with 56 points in 25 matches. Sevilla with 50 points in 24 matches. Pep Guardiola’s Manchester City seemed to have lost. The current champions were unbeaten in 15 consecutive matches in the Premier League before taking to the field today. That loss 15 matches ago was against Crystal Palace in October last year. Then 14 wins and one draw. Antonio Conte’s Tottenham finally landed Guardiola’s side on the field, also at City. In a thrilling match, Kant’s team won 3-2, City got a taste of a forgotten rate.

Despite this rate, City is at the top of the league’s points list. Guardiola’s team has 63 points from 26 matches. Liverpool have 58 points from one match less than them. Although the gap is currently 6 points, Liverpool can reduce it to 3 points in the next match against Leeds. The battle for the Premier League title will undoubtedly intensify.