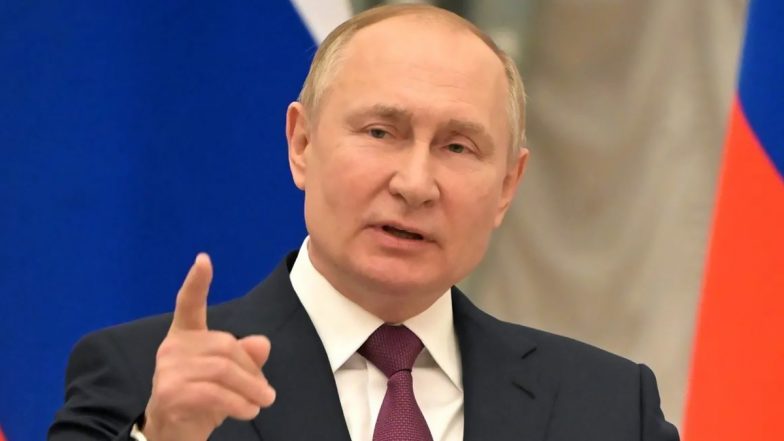 New Delhi, February 24: Russia has taken out Ukraine’s air defences and airforce with a series of precision attacks, the country’s Defence Ministry has said in a statement, after airports and runways across the country were rocked by explosions.

Officials also claimed on Thursday morning that Ukrainian border guards are not resisting the advancing Russian troops, who have moved in after President Vladimir Putin signed an order to begin a “special operation” in the Donbas, Russia Today reported. Russia-Ukraine Crisis Live Updates: 40 Killed in Attack on Ukraine; Country Cuts Off Diplomatic Ties with Russia.

At the same time, the officials denied claims made by Kiev’s defence chiefs that Russia had lost at least one military plane over the country during the offensive. In an earlier statement, Moscow reported that it was carrying out strikes at elements of Ukraine’s military infrastructure.

Russia launched the offensive against Ukraine on Thursday morning on the orders of President Vladimir Putin, who said the goal of the operation was to demilitarise and “de-Nazify” Ukraine, Russia Today reported.

The Russian leader claimed that the military action was necessary to stop Ukrainian attacks on the two breakaway regions of Donetsk and Lugansk, which Moscow recognised as sovereign states on Monday. He claimed Russia could come under attack by Ukrainian radicals, unless their influence in the country is diminished, and accused Western nations of arming Kiev against Russia, the report said.

(The above story first appeared on LatestLY on Feb 24, 2022 04:56 PM IST. For more news and updates on politics, world, sports, entertainment and lifestyle, log on to our website latestly.com).