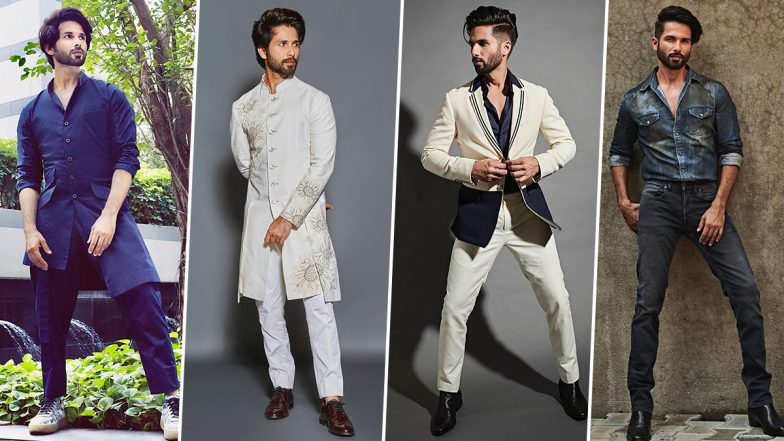 Shahid Kapoor Birthday: Putting His Dapper Wardrobe In The Spotlight, One Outfit at a Time (View Pics)

Kabir Singh might have been a turning chapter in Shahid Kapoor’s filmography but he was always eye candy for all the girls out there. Right from his chocolate boy looks in Ishq Vishq to his grave avatar in Haider, Kapoor managed to prove that his acting versatility is not merely restricted to any one genre. He’s a man of talent and his talent goes beyond the silver screen. Besides being a terrific actor of this era, Kapoor is also a sharp dresser who probably made men’s fashion a lot more desirable. Shahid Kapoor Stuns Fans as He Shares a Picture Flaunting His Clean-Shaven Look!

Now, of course, Shahid Kapoor’s sense of styling is too different from what we see on Ranveer Singh or even Karan Johar. His personality may be flamboyant but his dressing sense isn’t. It’s more charming and elegant if we can say. He likes his tuxedos and occasionally, there’s a dash of eccentricity to it. No, he doesn’t play it safe always but likes keeping it fun and dapper, in fact. Shahid’s red carpet shenanigans are delightful and his promotional wardrobe is equally fancy. With those well-tailored pants and well-designed suits, the Kaminey actor carves a special place in all our hearts. Jersey Song Mehram: Shahid Kapoor, A Former Cricketer, Is Ready To Take On The World Once Again (Watch Video).

To honour the fashion icon that he is and to celebrate his dressing style, we pick and name seven of his best fashion avatars from recent times. Let’s have a look.

Shahid’s Denim on Denim Look is Better than Kanye West’s!

No Man Can Do Prints Better Than Him

Coming to Shahid’s professional journey, the actor will be next seen in the Hindi remake of the Telugu movie, Jersey. The movie is slated to release in April 2022. Besides this, he also has Ali Abbas Zafar’s Bloody Daddy and Bull. The year ahead sure looks promising for the actor and here’s wishing him all the love and luck for it.

(The above story first appeared on LatestLY on Feb 25, 2022 09:30 AM IST. For more news and updates on politics, world, sports, entertainment and lifestyle, log on to our website latestly.com).