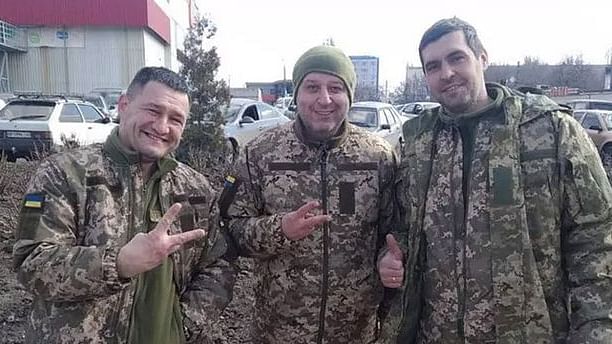 The coach who lost to Real is fighting for Ukraine

The market value of a club is only ৬ 13.6 million. Whether they lose to a club 6 times more expensive than themselves — this is the beauty of the Champions League!

Sheriff Tiraspol explained this beauty to Real Madrid in September last year. Real came back to play in the Champions League for the first time, winning 2–1.

The Moldovan club sheriff’s coach Yuri Vernidub is the price of the entire squad that is equal to the salary of Real star David Alaba. Who would have thought that Vernidub would have to leave the dugout a few months later. Homeland Ukraine will have to fight against Russia.

A picture is floating on social media right now. Vernidub is standing with comrades in Ukrainian army uniforms. Showing the victory sign ‘V’. In other words, after losing to Real, now it is Russia’s turn!

Belarus Premier League club Shakhtayar Saligorsk toured and was appointed sheriff’s coach in 2020. Sheriff is the first club in Moldova to get a chance to play in the Champions League.

Verniduber was born in 1986 in the northern Ukrainian city of Jaitomore. Today is the sixth day that Russia has invaded the country. Vernidub could not stay at home.

According to media reports, the 56-year-old coach has joined Ukraine’s ‘border protection’ activities. However, Vernidubai was not the first person from the country’s sports arena to join the war.

His picture has gone viral on social media after Vernidub joined the war. Sheriff’s Peruvian centerback Gustavo Dulanto expressed support for the coach, saying, “God help my coach Yuri who went to Ukraine.”

The sheriff’s dream has come to an end after he was eliminated from the group stage of the Champions League. Before the start of the Ukraine-Russia war, when the situation was getting complicated, Vernidub remembered the country even though he was busy with the sheriff’s game.