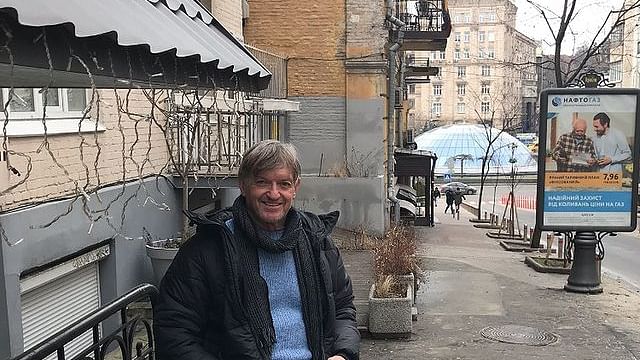 Trembling at the sound of bombs, holding on to love

No one is anywhere. Only the sound of bombers on the head বো the bombs falling from the belly, the flames of the fire and the destruction are spreading with a huge sound. A man is living alone in a seven-storey apartment in this hell. If he wants, he can go to the shelter. Can’t be tied to the beanie thread of animal love.

This may seem like a movie script. There are good movies about animal love. Travis from Old Yeller, Alec from Black Stallion, and Jack from White Fang — these characters symbolize the love of pets in movies. But the story of life also overwhelms the cinema. Cobas Olivier is such a real story character. Who knows, after the bloodshed in Ukraine stops, maybe a movie will be made about him. Until then, he will live!

Cobas Olivier
Cobas OlivierPhoto: Instagram
If the present time in Ukraine was like the past and ten ordinary days, Olivier might have taught in school, sowing the seeds of cricket among young Ukrainians. But now the time is different in Eastern European countries. Russia has launched air, land and air strikes since last Thursday. Ordinary people are scared to death.

The bomb fell from the stomach of the Russian plane, which was spinning on its head. People are fleeing their homes to shelters. Olivier can’t go. Can’t keep pets in that shelter. Where there is no place for ordinary people, giving space to a dog is a luxury.

But to Olivier his four dogs survive, the lives of Oli, Kaya and Jesse are as precious as his own. Otherwise, he could have easily left the dogs and gone to the shelter. In order to save his life, he could have forgotten the pets he had left in his home in Kiev. The rest of the negligence could be cured by starvation or Russian bombs. But Olivier is like Jerry Shepherd from the movie ‘Eight Below’!

Cobas Olivier with Gary Carsten
Cobas Olivier with Gary CarstenPhoto: Instagram
Jerry could not stay at home, leaving his dogs on the Antarctic continent to save his life, and returned to Antarctica to save his pets from the cold. And Olivier? Animals, like human beings, did not leave their homes as they woke up in their veins. Counting the hours of miraculously surviving with the dogs. Otherwise together ….

‘The bombing started at four in the morning. About five o’clock I was walking down the street with the dogs. The bomb exploded at close range. I ran to my flat. After that he never went out. I do not know Ukrainian or Russian. Neighbors have been told to go to the nearest shelter with blankets, warm clothes and water on their mobile phones. Underground railway stations are being used as a haven for bomb survivors. Almost everyone in and around my building has taken refuge there. But I can’t go because I have four puppies ‘— Olivier’s reality doesn’t end there, listen to the rest,’ I can’t take them (the dogs) to the shelter. There are thousands of people, dogs will not be allowed. I can’t leave them either. He is spending the day alone in his flat with great fear. Water, food and dog food have been stored for a month.

Ewen Morgan, Kevin O’Brien and William Porterfield were part of the team that faced Ireland’s Under-16 team when they were Dutch coaches. Leaving those days behind, Olivier’s present is the sound of gunfire and bombs, and the prayer for survival with four dogs in between. Yes, there is nothing to do but pray, ‘I am not brave, I am terrified. There is nothing else to do. That is the reality. ‘

Television is Olivier’s only recourse to alleviate the anxiety of living in a house. He spends his time listening to war news and watching cricket. Keep an eye on the current New Zealand-South Africa Test series. Olivier thinks the dogs are relieved to be by his side, ‘They sit next to me while watching TV. Almost all the time I eat snacks. They were silent but trembled at the sound of the bomb blast. ‘

Olivier’s father died in the city after his father arrived in Kiev with a dog. Since then, I have toured the city, ’36, with the meditative knowledge of the ungrateful Olivier, who has been tied to Kiev’s beanie thread. But Kiev is a unique experience for me. My father died here. So I’m tied to Kiev. No matter what happens, I’m not going. ‘