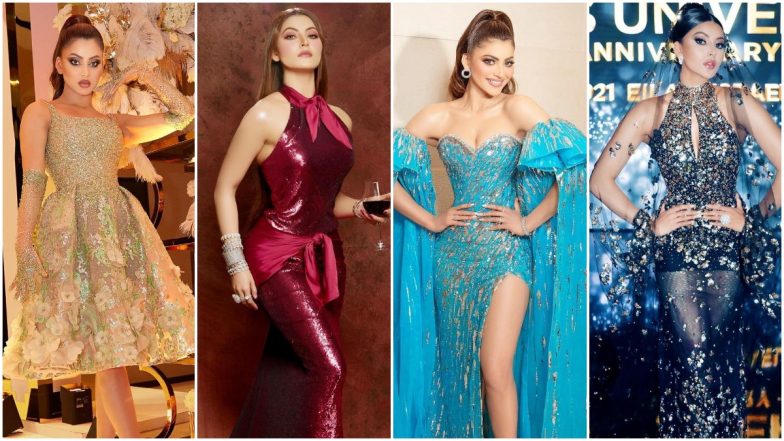 Urvashi Rautela Birthday: Bling Has a Special Place in Her Wardrobe, Proof in Pics

Hate Story IV actress Urvashi Rautela celebrates her birthday on February 25. After marking her film debut, Rautela had participated in a beauty pageant and was crowned Miss Diva Universe 2015 She later represented India at the Miss Universe 2015 pageant. After starring in Divya Khosla Kumar’s Sanam Re, Urvashi went on to star in many B-town movies including Pagalpanti and Great Grand Masti. And while her team continues to fetch some amazing projects for her, she keeps herself occupied with her OTT fashion sense. Urvashi Rautela Meets Former Israel PM Benjamin Netanyahu And Gifts Him Bhagavad Gita (View Pics).

Urvashi Rautela’s fashion sense is clearly over-the-top (OTT), meaning she won’t prefer anything that’s boring or too subtle for her taste. She likes being dramatic and her choices reflect that. The Virgin Bhanupriya actress has a thing for bling and that explains her one too many blingy outfits. From evening gowns to traditional six yards, Urvashi has to pick anything that’s blingy and charming enough for her taste. With dramatic shoulders, thigh-high slits or simply an eccentric design, Rautela continues to make the fashion world dizzy and her admirers are all hearts for it. To elaborate more on this here’s taking a peek inside her dramatic wardrobe, one outfit at a time. Urvashi Rautela Turns Into a Magician for Real, Desires To Be a ‘Cute Cucumber’ (Watch Video).

Sequinned Saree Will Forever Be in Vogue

Some Sheer and Lots of Bling

Go Green But With Bling

Bling and Some More Bling

Coming to her professional life, Urvashi will be next seen with Randeep Hooda in Inspector Avinash where she will play his wife. She also recently announced her next venture, Dil Hai Gray and is waiting for more interesting offers to come her way.

(The above story first appeared on LatestLY on Feb 25, 2022 09:00 AM IST. For more news and updates on politics, world, sports, entertainment and lifestyle, log on to our website latestly.com).