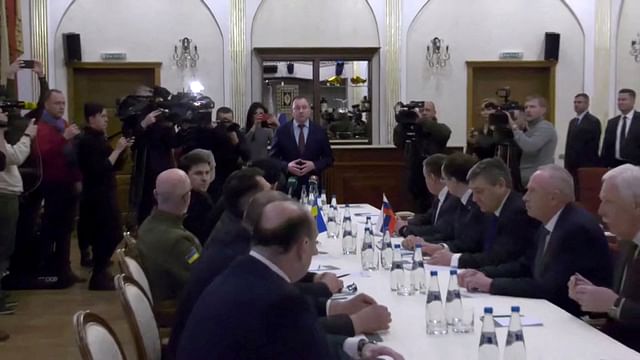 What happened during the five-hour Russia-Ukraine talks in Gomel

The two sides have been able to identify specific issues, such as a ceasefire agreement between Ukraine and Russia. They claimed that the issues were identified at the first round of talks between the Ukrainian and Russian delegations on the Belarusian border on Monday. They will meet again to discuss these issues before the next meeting. Members of the Ukrainian and Russian delegations told reporters after the meeting yesterday. News Russian media RT.

Mikhail Podoliak, an adviser to Ukrainian President Volodymyr Zelensky, said the main purpose of the meeting was to discuss a ceasefire in Ukraine. The two sides have identified a number of priorities for reaching a specific solution.

Vladimir Medinsky, an aide to Russian President Vladimir Putin, said the two countries’ delegations had identified issues on which consensus could be reached.

The Russian and Ukrainian delegations held talks for about five hours yesterday. It is also being discussed in Belarus, a country bordering Russia and Ukraine. Medinsky said the next round of talks would be held in the border region between Belarus and Poland.

The Ukrainian delegation was led by Defense Minister Oleksiy Reznikov. Their main demand was an immediate ceasefire and the withdrawal of all Russian troops from Ukraine.

Earlier on Sunday, Ukrainian President Zhelensky said he did not believe the talks would succeed. However, he thinks that there is a chance to reduce the tension through this. During the talks between the delegations of the two sides yesterday, Zelensky made an official request for the membership of the European Union.

On the morning of February 24 (Thursday), Russian President Vladimir Putin ordered the start of a military operation in Ukraine. He said that in order to ensure the security of Donetsk and Luhansk regions, it was necessary to make Kiev demilitarized and free from Nazi influence. Ukraine and its Western backers have accused Russia of pursuing aggression without provocation. Meanwhile, the United States, the United Kingdom, and the European Union have imposed sanctions on Russia’s economy, Putin and senior Russian officials.