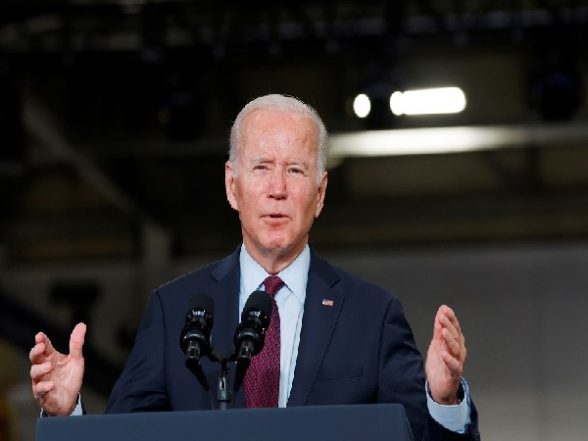 Washington [US], February 25 (ANI): US President Joe Biden said Thursday that the US will introduce a new wave of sanctions against Russia in a broad effort to isolate Moscow from the global economy.

The new package of sanctions aims to cut Russia off from the US financial markets and includes freezing the assets of four major Russian banks, including VTB Bank, the nation’s second-biggest bank, Biden said Thursday.

“Today, I’m authorizing additional strong sanctions and new limitations on what can be exported to Russia,” Biden said. “This is going to impose a severe cost on the Russian economy both immediately and over time.”

“I just spoke with the G-7 leaders this morning,” Biden said Thursday afternoon. “And we’re in full and total agreement: We will limit Russia’s ability to do business in dollars, euros, pounds, and yen to be part of the global economy. We’ll limit their ability to do that.”

Speaking at the White House, Biden also announced sweeping export restrictions that would limit Russia’s ability to do business. New export control measures could halt up to 50% of high-tech imports into Russia and severely limit its access to global exports of everything from commercial electronics and computers to semiconductors and aircraft parts.

“Putin is the aggressor. Putin chose this war and now he and his country will bear the consequences,” Biden said during a speech at the White House.

“It’s going to be a cold day for Russia,” Biden said.

The economic penalties come as Russian troops advance through Ukraine after embarking on a large-scale offensive of its neighbour early Thursday local time.

US Treasury Department released a more detailed list of the U.S. sanctions shortly after Biden’s speech. The department said that its restrictions will drastically undercut the ability of Russian lending giant Sberbank and VTB Bank to operate.

Biden said that possible Russia conduct cyberattacks against U.S. companies or infrastructure would be met in kind.

“Our forces are not and will not be engaged in the conflict with Russia in Ukraine. Our forces are not going to Europe to fight in Ukraine, but to defend our NATO allies,” Biden said. We will “defend every inch of NATO territory with the full force of American power.”

On a daily basis, Russian financial institutions conduct about $46 billion worth of foreign exchange transactions globally, 80 per cent of which are in U.S. dollars,” Treasury said in a release. ” The vast majority of those transactions will now be disrupted.”

It also said it will target families close to Russian President Vladimir Putin to put pressure on Moscow to end its military assault. Individuals named in the list include Putin ally and former chief of staff of the Presidential Executive Office Sergei Ivanov and his son. Igor Sechin, another of Putin’s closest allies and the CEO of Rosneft, one of the globe’s largest publicly traded oil companies, is being targeted along with his son.

Top officials in Ukraine and countries along the European Union’s border with Russia, as well as U.S. lawmakers from both Republican and Democrat parties, called for Moscow to be disconnected from the Swift global payment system, putting pressure on Western nations to act. Some U.S. lawmakers have privately pressed the White House on the issue, according to people familiar with the matter.

Prior to Biden’s remarks, leaders of the Group of Seven nations (G7) said they “are appalled by and condemn” Russia’s military aggression in Ukraine and promised to impose “severe and coordinated economic and financial sanctions” against the Kremlin.

On Tuesday, Biden unveiled an initial tranche of sanctions on two Russian financial institutions, as well as the country’s sovereign debt and several Russian elites and their families. (ANI)