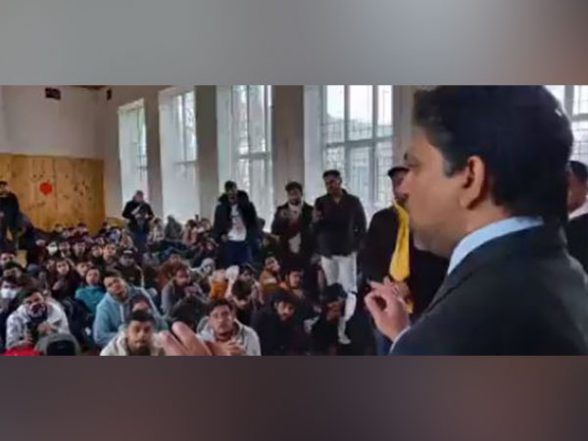 New Delhi [India], February 24 (ANI): With Ukraine closing its airspace after Russia launched a military operation against it, the Ministry of External Affairs (MEA) on Thursday said that teams are being sent to the land borders with Ukraine in Hungary, Poland, Slovak Republic and Romania to assist the evacuation of Indian nationals.

“To assist in the evacuation of Indian nationals from Ukraine, MEA Teams from @IndiaInHungary, @IndiainPoland, @IndiaInSlovakia and @eoiromania are on their way to the adjoining land borders with Ukraine,” said Arindam Bagchi spokesperson of Ministry of External Affairs.

Indian nationals in Ukraine near the border points can contact the following teams.

“Indian nationals in Ukraine near the above border points can contact the above teams in case they wish to depart Ukraine,” said MEA in a statement.

Partha Satpathy, Ambassador of India in Ukraine, said that the Embassy of India in Kiev will continue to operate till every Indian is evacuated.

“The Embassy of India in Kiev continues to operate round the clock 24X7. Today morning we woke up with the news that Kiev is under attack, the whole of Ukraine is under attack. This has generated a lot of anxiety, uncertainty, and created tension. I would like to assure all of you that the Embassy of India continues to operate around the clock looking out for the safety and security of Indians here,” he said.

“The Government of India, Ministry of External Affairs and the Indian Embassy are fully alert and working on modalities to see how we can evacuate our citizens through the neighbouring countries along the western borders of Ukraine. As I say times are uncertain and therefore it is important to be calm, level-headed and take necessary safety and precautions that are important to all of us. We will continue to operate here till every Indian is back,” he added.

The Embassy of India in Ukraine accommodated more than 200 Indian students at a school near the Embassy in Kiev.

Russian President Vladimir Putin on Monday recognized Ukraine’s breakaway regions – Donetsk and Luhansk – as independent entities escalating the ongoing tensions between the two countries. Ukraine gained independence in 1991 after the disintegration of the Soviet Union.

Earlier today, Russian President Vladimir Putin said special military operations are being launched “to protect” the people in the Donbas region. He also warned other countries that any attempt to interfere with the Russian action would lead to “consequences”.

Leaders from a number of countries including the UK, the US, Canada, and the European Union have condemned Russia’s military operations in the Donbas region. (ANI)