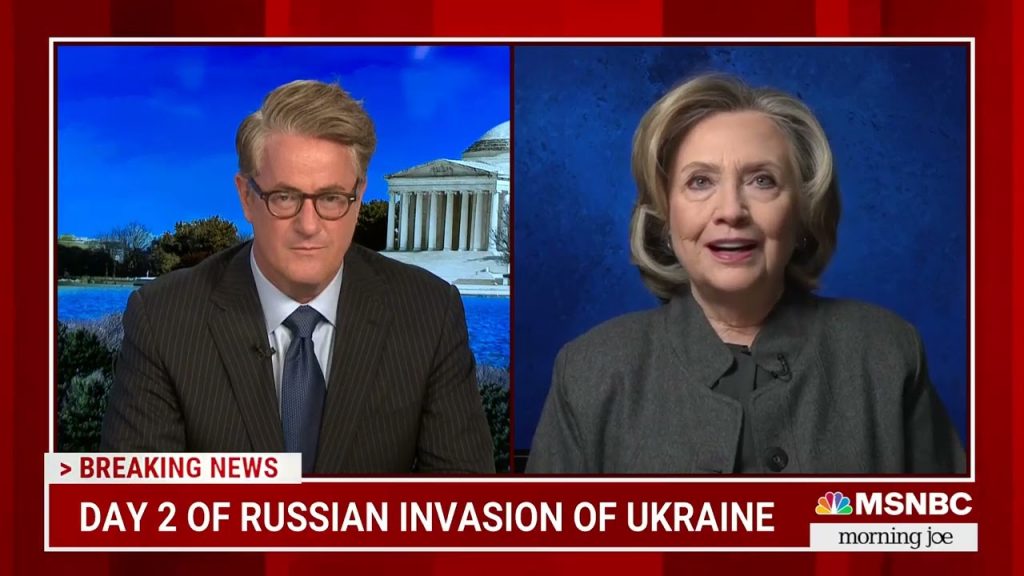 Sitting out in the open, in front of everyone’s face, is the fact that the Russians seem to own the Republican Party, and it has never been more apparent than in the run-up to war between Russia – a nation that is supposed to be our adversary – against a young democracy in a critically important part of the world, a nation we want to support.

But do we support Ukraine? The Biden administration supports Ukraine. But Hillary Clinton, former Sec. of State (among so many other titles), wanted to talk about the fact that many Republicans are entirely open in their support for Russia:

“I do think it’s important to support both the Ukrainian military and then depending upon what happens and how quickly events unfold, supporting those who are putting up resistance.

“I want to make another point which is that we have to also make sure that within our own country we are calling out those people who are giving aid and comfort to Vladimir Putin, who are talking about what a genius he is, what a smart move it is, who are unfortunately being broadcast by Russian media, not only inside Russia, but in Europe to demonstrate the division within our own country.”

Just as the election of Donald Trump might have represented the ultimate intelligence coup, the MAGA support of the Russian invasion (Tucker, Trump, Cawthorn, et. al.) may be the ultimate public relations coup. We have already read reports about Russian television, playing video of Tucker Carlson cheering for Russia and Trump talking about Putin’s genius.

“You know, madam secretary, I’m so glad you brought up, as we former Republicans used to call people that were sympathetic to the old Soviet Union, these ‘useful idiots’ on the Trump-right that we now have.

“And the former Republican in me remembered the stories of the dissidents who would say they remembered hearing of what Ronald Reagan would say during the cold war and it would spread around the jail cells, it would spread around the gulags. This morning as I was thinking about that I was so saddened because they’re replaying this propaganda from Trumpists in Moscow and that has to be getting to the Ukrainian people. How distressing, madam secretary, how distressing.”

It is utterly shameful. It is also 100% out in the open. There is no reason for anyone on the Right to be supporting Russia unless they are in some sort of agreement with Putin regarding how the world should be run, which would include utter hatred for Western Liberalism.

It is entirely obvious that Hillary Clinton has had it and feels no need to be diplomatic about things. It is time for Republicans to pick sides, and she meant far more so than during this war:

“This is heartbreaking, but it’s also dangerous and I think it’s time for what’s left of the Republican Party that has any common sense not just to say, ‘okay, go help defend Ukraine against Putin,’ but to stand against those people in politics and government, in the media and elsewhere in our own country who are literally giving aid and comfort to an enemy of freedom and democracy.”

And then  loweClinton red the anvil on what is at stake, whether this country can unify to defend what was once presumed, western democracy:

It can’t — it can’t continue because it plays right into the ambitions of not just Putin, but also president Xi of China to undermine democracy, to literally divide and conquer the west without ever invading us, but by setting us against each other.

We are already against each other. One need only watch one episode of Tucker Carlson and hear him talk about Putin never calling him a racist, Putin never criticizing Tucker. Of course, Tucker doesn’t understand that while he takes the side of fascism, if we really wanted to import that type of government to this country, Tucker could drink polonium coffee one day or be thrown off a building, if he criticized the wrong person in power.

The MAGAs are fine with Putin and have no problem importing Russian-style government here because they presume they will get “their dictator” and the liberals can shut up. January 6th was premised upon a readiness to do away with Western Liberalism in favor of fascism.

Hillary Clinton is right. As always. It is time to call out the Republican Party and force them to stand on one side of the line or the other. We don’t know whether this war will expand and we don’t know who is on the side of the United States Constitution.

Jason Miciak is a political writer, features writer, author, and attorney. He is originally from Canada but grew up in the Pacific Northwest as a dual Canadian-American citizen, which he grows increasingly thankful for every day. He now enjoys life as a single dad, writing from the beaches of the Gulf Coast, getting advice from his beloved daughter and teammate. He is very much the dreamy mystic that cannot add and loves dogs more than most people. He also likes studying cooking, theoretical physics, cosmology, and quantum mechanics. He likes pizza.

Please visit his Substack Newsletter, get the first month free: Much Ado About Everything: By Jason Miciak