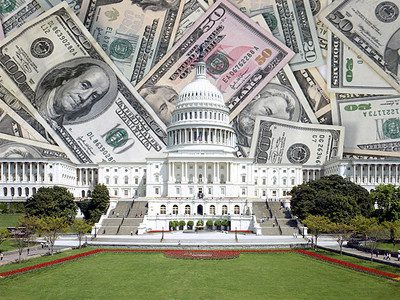 The American people, or at least 40% of the American people, have trouble understanding that macroeconomics entails a global economy. Inflation is global, and there is precious little that Biden could do about it. In fact, if anyone wants to place blame on anyone, put it on Donald Trump, who insisted that the Federal Reserve use afterburners to drive his hot economy (Put in place by Barack Obama. Thanks, Obama.)

The fact that the Federal Reserve used just about every tool in its box to keep Trump’s economy pumping along at an unsustainable pace means there is less the Fed. can do to fight the growing threat of inflation. Biden has talked about lifting the federal gas tax for the rest of the year, a rather feeble move for each of us at the pump, but a significant one for a government trying to build back better without falling further into debt.

One thing can and should be done. Some of the inflation in pricing is well beyond that of the increased cost in getting goods to market. As most know, American companies have a long and storied history when it comes to price gouging and is extremely good at it.

Corporate American looks over the landscape and sees inflation everywhere. If one purchases a can of soup at the grocery store that is now ninety cents more than it was a year ago, one’s mind chalks it up to inflation, and not to the fact that the company’s expense only increased 25 cents, but priced it at the extra seventy because they won’t be blamed. Consumers assume that Biden and inflation are the cause.

There is a remedy. The Department of Justice has entire sections dedicated to price gouging and they could get especially aggressive, putting out consumer notices, commercials, stuff on social media, telling consumers to expect a certain percentage increase in prices, perhaps 11%-15%? But make it clear that increases beyond that expected reflect a company taking advantage of the consumer and the political situation.

With respect to the worst abuses, the law allows DOJ to file civil suits to counter run-of-the-mill price gouging, which can even be expanded to criminal charges, if war, natural disaster, or blameless scarcity is involved, and those criminal charges can be brought against individual companies themselves, putting their existence at risk.

It must be infuriating to Biden. There is almost nothing he can do and what he tried to do, keep the child tax credit (which offsets one hell of a lot of inflation) was denied by a Congress that is happy to see the United States suffer and fail, so long as it is under the other guy. Call it the McConnell doctrine.

In so many ways we are failing as a “United” country in order to become shared territory among two hostile powers, our ability to come together to fight inflation is but one. Republicans are thrilled that costs are going up. It is why it is mentioned every time they open their mouths.

Jason Miciak is a political writer, features writer, author, and attorney. He is originally from Canada but grew up in the Pacific Northwest as a dual Canadian-American citizen, which he grows increasingly thankful for every day. He now enjoys life as a single dad, writing from the beaches of the Gulf Coast, getting advice from his beloved daughter and teammate. He is very much the dreamy mystic that cannot add and loves dogs more than most people. He also likes studying cooking, theoretical physics, cosmology, and quantum mechanics. He likes pizza.

Please visit his Substack Newsletter, get the first month free: Much Ado About Everything: By Jason Miciak