As meltwater trickles down through the Greenland ice sheet, it heats up – which means that some areas at the base of the ice sheet are melting 100 times faster than we thought 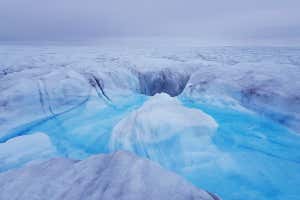 Water flowing down to the bed of Store glacier, Greenland

A new source of melting at the bottom of ice sheets could mean they thaw more quickly and raise sea levels faster than previously thought.

Ice sheets, glacial features which cover an area greater than 50,000 square kilometres, are difficult to measure at their base because of the ice depth. This makes it hard to model the dynamics by which they move and melt.

Now, Poul Christoffersen at the University of Cambridge and his colleagues have found a way to measure the rate of melting underneath the Greenland ice sheet, the second largest ice sheet in the world, using radar with a wavelength of just a few millimetres and direct borehole measurements.

Christoffersen and his team found that the rate of melting at the bottom of a vertical crack which water flows down was 100 times greater than previous estimates, almost as high as the melting at the sun-exposed surface. They think the enhanced effect comes from the conversion of gravitational energy that the meltwater has at the surface into heat as it trickles downwards, which drives the melting of the ice at the bottom.

“Models do not include this effect, but it’s actually quite substantial,” says Christoffersen. “The melting that’s generated through this process is several orders of magnitude higher than [melting from] other heat sources such as friction and geothermal heat flux [meaning the effect of heat from Earth’s interior].”

The Greenland ice sheet is already thought to be the largest global contributor to sea level change, but this new effect could make it an even larger source. Christoffersen and his team estimate that, as more meltwater is generated at the surface in future, the heat source [at the base] could grow to be seven times as large as it is today by 2100. Because the heating comes from gravity, it could mean that other deep ice sheets also have a higher rate of melting than previously thought.

“There’s clearly an energy component missing in the models that we’re using to try and predict the dynamic contribution to sea level change,” says Christoffersen.

The long-term picture for sea level rise is uncertain, he says. As an ice sheet melts and shrinks in height, this effect could become a greater source of heat as more meltwater trickles down. But if meltwater at the bottom of the ice sheet flows more rapidly into the sea in future, it may have less time to cause further melting.