Brain cells that regulate wakefulness may become overactive with age

Brain cells that promote wakefulness fire too much in older mice, which may explain why many people find it harder to sleep as we get older 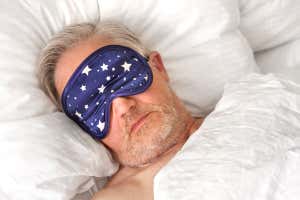 A man wearing an eye mask in bed

It may get harder to sleep as we get older because neurons that promote wakefulness in the brain become overactive, a study in mice suggests.

Poor sleep in older people is a major issue. “More than 50 per cent over the age of 65 have complained about their sleep,” says Luis de Lecea at Stanford University in California. “This jumps to 80 per cent of patients with neurological disorders such as Alzheimer’s and Parkinson’s. It’s a very serious problem.”

Beyond worsening quality of life, poor sleep has also been linked to the development of neurological disorders like Alzheimer’s disease.

De Lecea and his colleagues analysed a set of neurons in the hypothalamus of mouse brains that produce a protein called hypocretin. These neurons have been implicated in wakefulness in both humans and mice.

The researchers suspected that this circuit may be involved in older people having worse sleep because the number of hypocretin neurons in the hypothalamus declines with age in mice and humans. “As many as 20 per cent of these neurons die in older people,” says de Lecea.

Like older humans, older mice also have a more disrupted sleep pattern – even though the two species have very different sleeping habits.

When comparing this set of neurons in young and old mice, they found that the hypocretin neurons in the older mice fired more easily – which is known as being hyperexcitable – and were therefore overactive.

When they treated the older mice with a drug that reduced the neurons’ hyperexcitability, their sleep quality improved.

De Lecea says he has no idea what may be causing this hyperexcitability in the first place, but since hypocretin neurons are also present in humans and have the same function, this gives us a potential drug target for people.

“This work on the hypocretin system is very exciting and may contribute to part of the puzzle as to why sleep instability can occur in later life across a variety of species,” says Renata Riha at the University of Edinburgh, UK.

“What drives the hyperexcitability of a steadily diminishing pool of hypocretin cells with ageing in mice is still not entirely clear. However, this is a very exciting first step in addressing sleep instability overall, not just in ageing,” she says.

The next step is to look at the neuronal circuits that are involved in inducing sleep, says de Lecea. “We’ve only looked at the neurons involved in wakefulness so far. It only gives us half the equation.”