Pterosaur fossil from Scotland is largest Jurassic flier ever found

A 170-million-year-old pterosaur found on the Isle of Skye off the north-west coast of Scotland had a wingspan of about 2.5 metres, making it the largest known winged reptile from the Jurassic 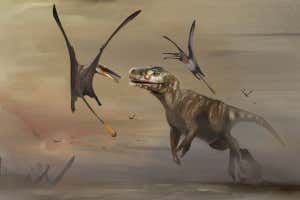 An exceptionally well-preserved pterosaur fossil, unearthed on a Scottish island, represents the largest flying reptile ever discovered from the Jurassic Period.

With a wingspan of approximately 2.5 metres, an aerodynamic head and upper and lower teeth that criss-crossed each other like the stiff hairs on the leaf of a Venus flytrap, the new species provides evidence that pterosaurs started getting larger at a much earlier point in prehistory than previously thought.

The newly named 170-million-year-old Dearc sgiathanach was about the size of a modern albatross, says Natalia Jagielska at the University of Edinburgh, UK.

“This is the first time in the very long history [of UK pterosaur research] that we have found a skull and the body attached, and especially representing a species and a time period that’s so poorly understood,” says Jagielska. “So it’s super, super exciting to be making history in terms of research.”

Pterosaurs evolved 230 million years ago during the Triassic Period as small, flying reptiles. But by the Cretaceous Period – when popular terrestrial dinosaurs like Tyrannosaurus rex and Triceratops roamed – pterosaurs such as Quetzalcoatlus had grown to the size of modern fighter jets with 12-metre-wide wingspans.

“In between, there is just this lack of information,” says Jagielska, referring specifically to the Middle Jurassic, around 174 million to 164 million years ago. Few pterosaur fossils from this time are left worldwide – probably because climatic conditions weren’t favourable for their preservation. Scientists had generally assumed that pterosaurs remained small at this time, with wingspans of no more than 1.8 metres, before becoming larger at the very end of the Jurassic and into the Cretaceous, she says.

D. sgiathanach suggests a rethink is in order. In 2017, Amelia Penny, now at the University of St Andrews, UK, recognised the shape of a pterosaur skull protruding from a limestone layer on a tidal platform on the Isle of Skye off the north-west coast of Scotland, UK, where she and her colleagues were looking for dinosaur footprints. Researchers then used diamond-tipped saws to cut through the limestone and extract the fossil in between tides, says Jagielska.

Close visual inspection, along with X-ray computed microtomography, revealed a remarkably well-preserved skeleton with bones “still articulated as they would have been in real life” embedded in the limestone slabs, she says. 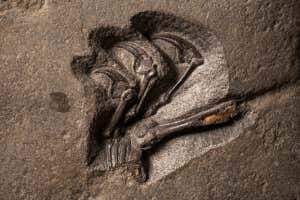 Claws of the new pterosaur

Jagielska and her colleagues determined that the pterosaur was a growing juvenile with yet-unfused bones in its head and back and rapid-growth bone microstructures. Despite its young age, it had longer limb bones and a longer skull – and hence a larger estimated total wingspan – than any other known Jurassic pterosaur. The largest members of the species might have measured 3.8 metres from wingtip to wingtip.

The animal had sharp upper and lower teeth that criss-crossed each other outside the mouth, which would have been ideal for catching fish, says Jagielska. Like lots of other pterosaurs, it had a short neck and a long tail. But unlike many pterosaurs, this individual didn’t seem to have any kind of head crest – although the top of the skull had been damaged by exposure to tidal waters, leaving room for doubt, she says.

The team named the species Dearc sgiathanach (pronounced jark ski-an-ach), which references its status as a winged reptile from Skye, an island that is known as An t-Eilean Sgitheanach in Scottish Gaelic.