Rats can track the passage of time and judge their accuracy

Rats trained to leave 3.2 seconds between presses of a lever or to hold it down for this length of time seem able to judge whether they were accurate enough to have earned a reward 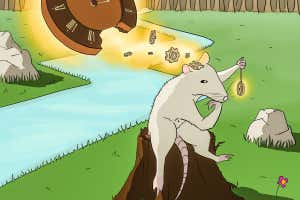 Rats can estimate the passage of time and then judge how accurately they did so.

We already know that rats can distinguish between long and short periods of time, but it has been unclear whether they can assess their ability to guess the duration of a given time period.

A study led by Tadeusz Kononowicz at the Polish Academy of Sciences suggests they can.

“When we saw the first results it was disbelief. We were even thinking, are the rats somehow tricking us?” says Kononowicz. “Our results add a whole new richness to the way that rats represent time [in their minds].”

The researchers then gave the rats a way to report on their own performance after each of hundreds of trials. This was achieved through the use of two “reward ports”, one on either side of the lever.

The precise leeway each rat was given for its timekeeping during the testing depended on its performance during its training. If the animal was judged to be close to the target time of 3.2 seconds – within about 250 milliseconds, on average – it had the option of poking its nose into the left port to receive two food pellets. There were no food pellets in the right port.

However, if the rat was judged less precise with its timing – if it was off by around 500 milliseconds, on average – the left port no longer delivered a reward. But the rat could poke its nose into the right port to receive one food pellet.

By tracking the rats’ port choices after each test, the team found that the animals in both groups learned to judge their accuracy on the lever test. Rats that had been precise enough with their timing approached the left port for a large reward more than 60 per cent of the time. Those that had been less precise approached the right port for a small reward more than 60 per cent of the time. This suggests the rats could self monitor the size of their temporal errors.

“This study carries our understanding of rats’ timing ability to a whole new level by showing that not only do rats represent time [in their mind], but they also monitor the degree of errors,” says Fuat Balci at Koç University in Turkey.

There was always a possibility that rats would simply approach the port they had been rewarded from most frequently in recent trials. But although this was a minor factor, over the course of the experiment, it was the accuracy of the most recent interaction with the lever that made the largest contribution to a rat’s decision about which port to approach.

“It turned out to be even more interesting than I had originally imagined. Rats kept track of which port they tended to get more rewards… but they paid the most attention to their error of judgement in the current trial,” says Kononowicz.

Next, the team hopes to explore the neural mechanisms behind such self-monitoring behaviour. This could shed light on why the rats cannot use this ability to address their error during the test.