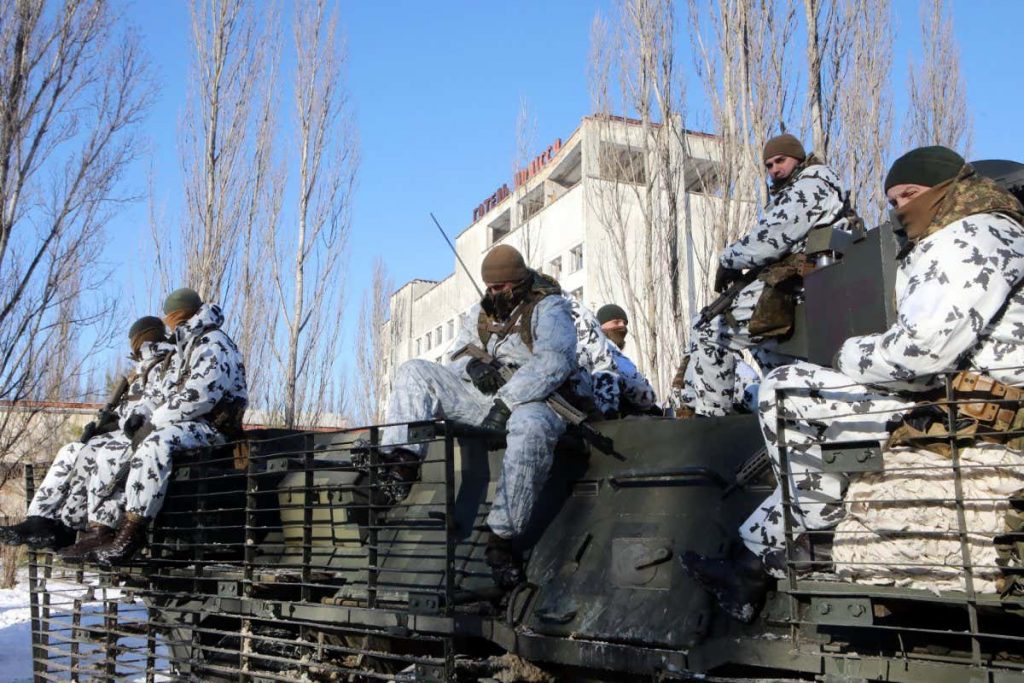 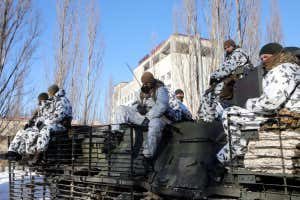 Ukrainian soldiers in the abandoned city of Pripyat, near Chernobyl

Russian forces have gained control of the Chernobyl nuclear reactor in Ukraine, and reports of firefights at the site have led to concerns about the release of radioactive material from the plant, which experienced a catastrophic meltdown in 1986. But physicists say the risk of radioactive emissions as a result of accidental damage is minimal.

Nika Melkozerova, a journalist with NewVoiceUkraine, reports that Russian forces have reached Chernobyl where they have met “fierce resistance” from Ukrainian soldiers. A researcher who monitors the ongoing emission of neutrons from the reactor to gauge safety spoke to New Scientist on 24 February, and says that staff at Chernobyl were safe. “The entrance of [Chernobyl is] controlled by Russians. They do not enter inside,” he says.

Ukraine’s Ministry of Foreign Affairs tweeted that Russia’s actions could “cause another ecological disaster”, while the Ukrainian president Volodymyr Zelenskyy tweeted: “Our defenders are giving their lives so that the tragedy of 1986 will not be repeated.”

The explosion at Chernobyl in 1986 brought down walls and sealed off many rooms and corridors. Tonnes of fissile material from the interior of a reactor were strewn throughout the facility and the heat it generated melted sand from the reactor walls with concrete and steel to form lava-like and intensely radioactive substances that oozed into lower floors.

Scientists monitoring the plant were already operating as a skeleton crew due to the covid-19 pandemic. One Chernobyl scientist, who worked on confinement plans at Chernobyl, told New Scientist on 22 February, prior to the invasion, that monitoring work would continue and that all safety systems at the plant are working well, but that scientific data processing has been partially suspended. “We have time,” he said. “According to my estimation, the rise of neutrons, if any, could be felt only in April. Only after that we may judge about actual trends – if it’s flattened or still growing.”

But Bruno Merk at the University of Liverpool, UK, says the risk of nuclear material being released from the decaying reactor as a result of the conflict is low. “I think as long as there is not a deliberate attack the risk is comparably low,” he says. “If it’s a deliberate act, you could possibly do it.”

Merk believes that a brief interruption in monitoring is unlikely to cause issues. “It’s a stabilised problem. So I think that if the scientists are not observing this for the next several months, which is in my view a reasonable timescale, I don’t think that there are really big risks. Yes, in the long term, it’s important to observe what’s going on. It’s important to have early warnings, but I think some of the some of the information may even be remotely accessible. Nothing will run away in the short term.”