We thought black holes rotated in the same plane as their orbit. One that is tilted by at least 40 degrees suggests our understanding of their behaviour needs an update 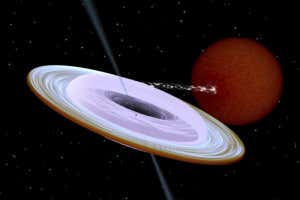 A black hole that is spinning on a severe tilt to the plane of its orbit suggests we need to rethink our understanding of how they work.

Most masses in space, including black holes, rotate in the same plane that they revolve around nearby objects, typically because such closely located objects formed from the same cloud of dust or gas. If an object is tilted relative to its orbit, it can imply something unusual happened during its formation or history.

Now, Juri Poutanen at the University of Turku, Finland, and his colleagues have realised a black hole about 10,000 light years from Earth is tilted by at least 40 degrees from the plane in which it is revolving with its binary partner, a star with about half the mass of the sun.

The black hole, named MAXI J1820+070, gives off a weak signal of polarised light, which the researchers used to establish its orbital plane. They then used the orientation of the black hole’s radiation jets to calculate a lower bound on the black hole’s tilt. “The only explanation that we found is that the black hole spin and orbital spin are misaligned,” says Poutanen.

This tilt could explain the observation of strange signals – called quasi-periodic oscillations (QPOs) – that come from black holes. QPOs are peaks in intensity at certain frequencies. A popular model suggests these signals are a result of misaligned spins and orbits, as is the case for MAXI J1820+070, which also produces QPOs.

While it isn’t clear exactly how this black hole acquired such a tilt, it is probable that it came from instabilities when its parent supernova collapsed, says Poutanen. “During the asymmetric collapse, you produce a kick, which means that you produce [momentum], for example with neutrinos, which is ejected in one direction more than another.”

Astronomers often assume that the orbital plane and spin axis are aligned when calculating the mass and spin of black holes from observations. But if this assumption isn’t reliable, then those calculations could be incorrect.

“If the tilt is 40 degrees, or even more, then the results you gather may be completely or significantly wrong,” says Ferdinando Patat at the European Southern Observatory.