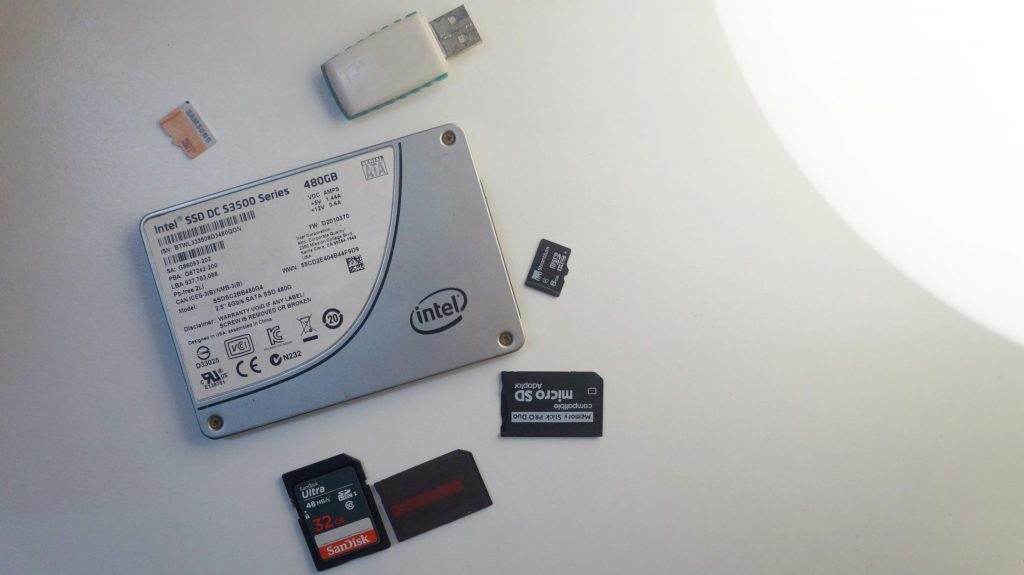 What is flash memory and how does it work? Everything you need to know

Virtually all modern devices rely on flash memory — an electronic data storage technology that can preserve information for long periods of time. Your smartphone, for instance, uses some form of flash memory for storage, and it’s likely that most laptops and computers around you utilize it as well. However, not all flash memory is created equal — some implementations are far superior to others. So in this article, let’s break down the technology, how it works, and the various terms you may have heard associated with the technology.

What is flash memory and why is it so popular? 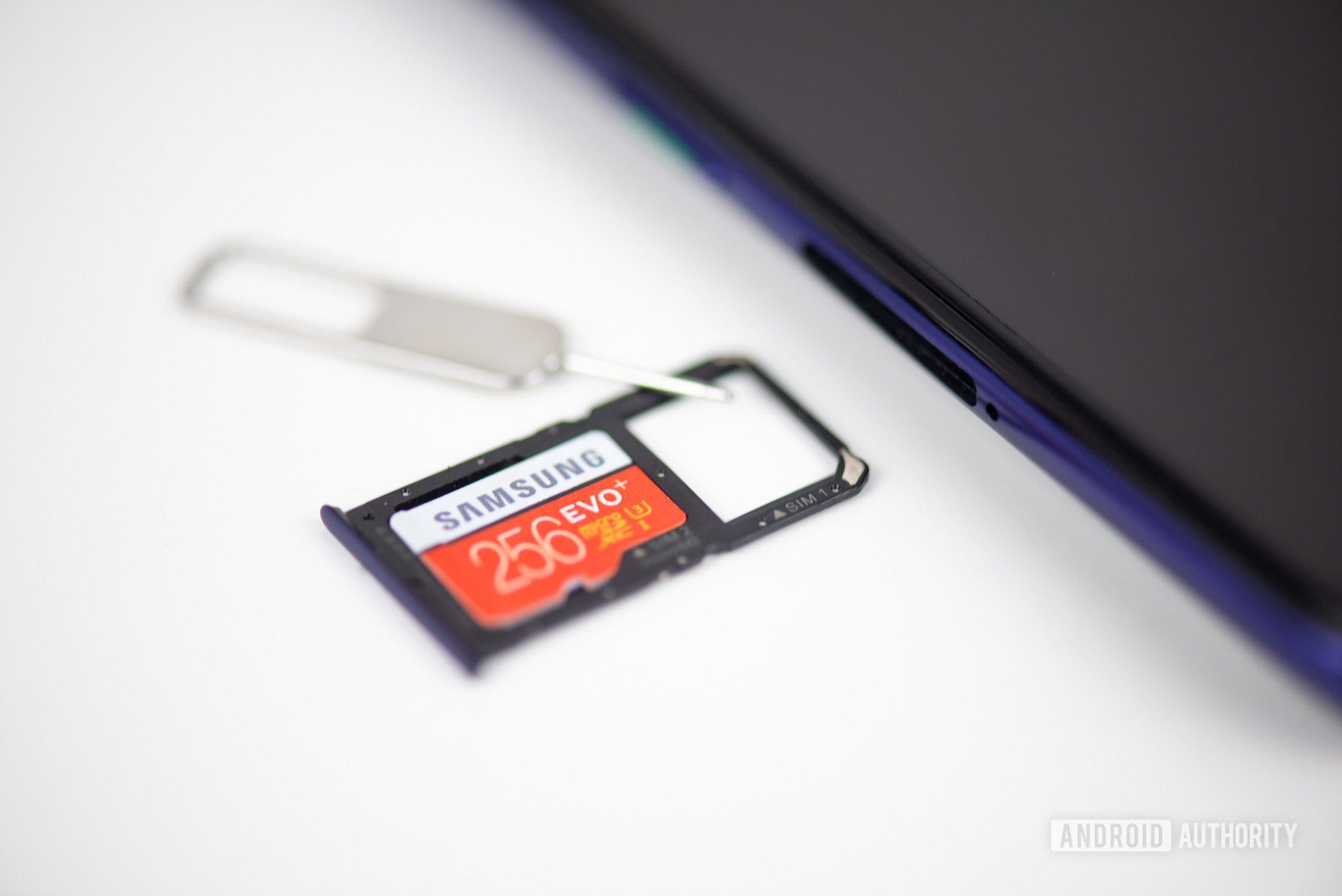 Flash memory is a type of non-volatile storage. The non-volatile bit means that data is retained even when the device completely loses power. That’s in stark contrast to RAM, a type of volatile memory that loses all of its data when powered down or reset. Flash memory’s ability to store data without a power source, along with other benefits we’ll discuss, makes it ideal for use as a storage medium, and it’s only growing in popularity.

Hard disks were once the dominant storage medium for electronic devices. The first-generation iPod, for instance, used a 5GB hard drive from Toshiba. Similarly, most laptops and desktop computers until the early 2010s had hard disks as their primary storage device. But much of the consumer electronics industry has now dropped hard disks in favor of flash memory, especially in applications like gaming that require a fast storage medium.

Hard drives have numerous disadvantages. For one, their spinning platters make them largely mechanical devices. In other words, they have several failure-prone moving parts. Secondly, they’re not very fast, since a magnetic needle has to physically reach specific parts of a spinning platter to read and write data.

Flash memory, on the other hand, is entirely electronic. Data is still stored digitally, in the form of 1s and 0s. Instead of using magnetism like in hard drives, however, flash uses so-called memory cells built from transistor gates. The absence of moving parts affords flash memory-based storage devices several benefits. They often have longer lifespans, occupy less space, and operate significantly faster than hard drives. Of course, the technology has a few drawbacks, but besides cost, most don’t really affect the typical user. 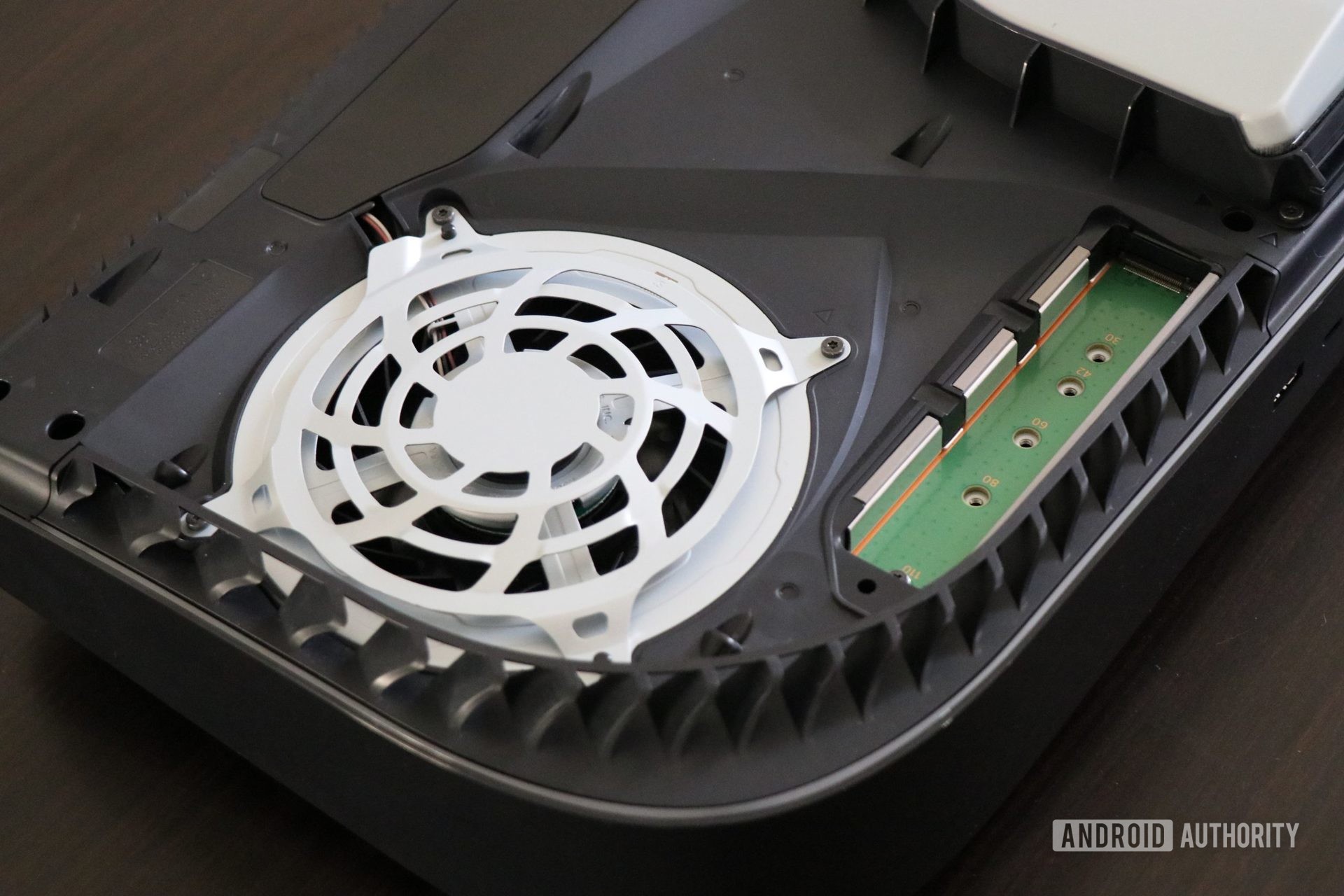 SATA: Introduced in the early 2000s, SATA refers to the communication interface between a computer’s motherboard and storage devices like hard disks. The latest most popular revision, SATA III, offers a maximum throughput of 600MB/s — far from the cutting-edge. The standard hasn’t seen any updates since 2009 but remains widely used today.

PCIe: PCIe stands for peripheral component interconnect express and provides the communication backbone for NVMe devices. The performance of an NVMe drive may vary depending on the CPU’s PCIe capabilities. For example, a PCIe Gen 4 NVMe SSD may exhibit slower speeds in older computers with only Gen 3 capabilities. On the other hand, newer devices like the PlayStation 5 mandate PCIe Gen 4 NVMe SSDs above a certain speed threshold for a consistent user experience.

M.2: M.2 refers to a physical connector used for expansion cards. The slot is typically found on computer and laptop motherboards, but you may also see it on other devices like the PlayStation 5 (the green space pictured above). An M.2 connector can be electrically wired up to function in either SATA or PCIe mode. Laptops often use M.2 for high-bandwidth expansion cards like Wi-Fi cards and SSDs.

How is the technology related to SSDs, UFS, and eMMC?

Storage devices that utilize flash memory come in various shapes and sizes, depending on their intended use case. A computer’s primary boot drive, for example, needs to be faster and more durable than a thumb drive that you’ll only use to store media files. SSDs, eMMC chips, and SD cards all use flash memory, but exact implementations can vary.

Solid State Drives (SSDs) typically contain more than just flash memory — many also house a DRAM cache and memory controller. The former can speed up reads and writes, but budget drives tend not to include it. The controller, meanwhile, helps the system interface with the drive’s stored data. In some cases, it can also help increase the drive’s longevity through techniques such as wear leveling and error correction. 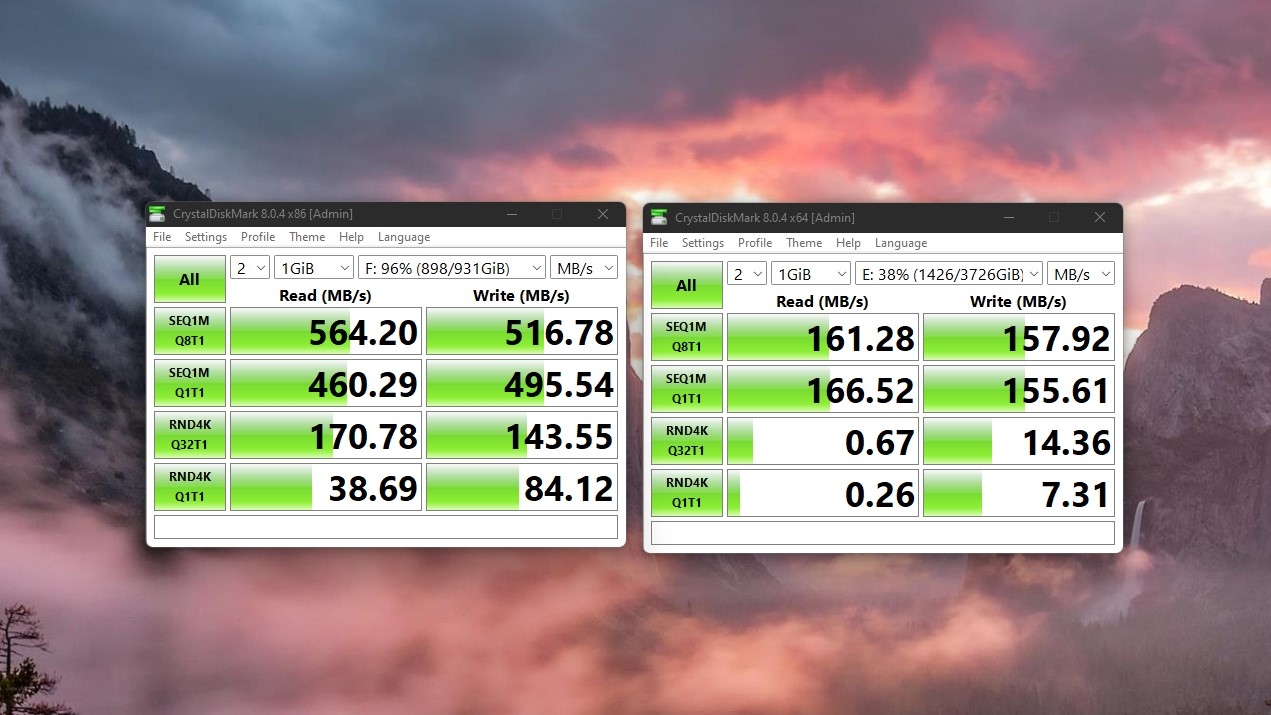 SD cards typically offer worse durability and speeds than SSDs, even though both share the same underlying technology.

Finally, you may have also heard of eMMC and UFS flash storage chips in the context of smartphones, tablets, and laptops. MMC stands for embedded MultiMediaCard, while UFS is short for Universal Flash Storage. You’ll find these embedded chips soldered directly onto a device’s motherboard.

These days, UFS has started to replace eMMC as the standard for smartphone storage. The former is significantly faster (up to 2,100 MB/s vs 250MB/s) as it supports simultaneous read and write — think of UFS as a two-way multi-lane highway and eMMC as a one-way road. Both are still significantly faster than hard drives, though.

Storage speeds are more important for certain applications than others. High-resolution video recording, for instance, can overwhelm most lower-end SD cards. Similarly, games and other intensive workloads can benefit from faster storage. 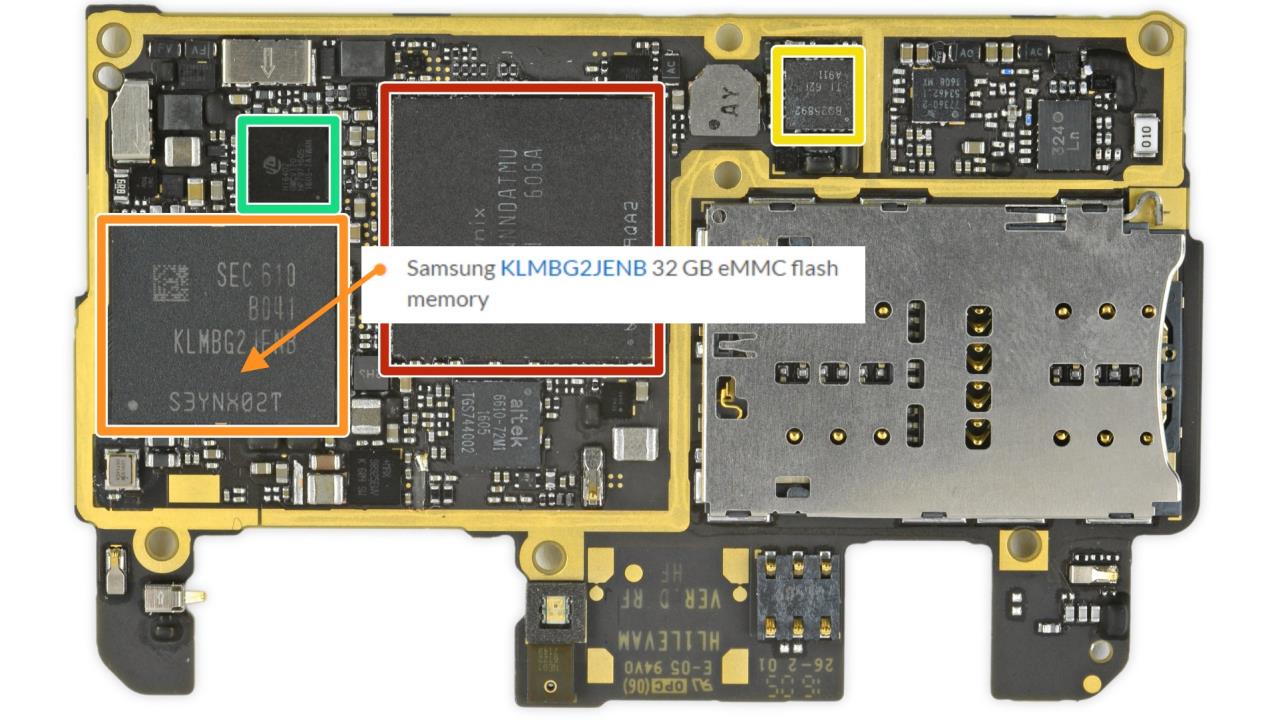 Without getting too deep into the specifics of the electronics involved, flash memory stores data in memory cells. These cells contain floating-gate transistors that can trap electrons for a long period of time, but not forever. These cells have three operations: read, write, and erase, depending on where you apply a voltage. To perform a write operation, the floating gate in the memory cell is either charged or discharged — the former denotes a logical 0, while a discharged state indicates 1.

Modern storage devices organize memory cells in pages that allow large amounts of data to be accessed simultaneously instead of cell-by-cell. The most common type of flash storage, called NAND flash, contains blocks of 32 or 64 pages.

A consumer device containing NAND flash, like a USB drive or SSD, has millions of memory cells stacked horizontally, vertically, or in both dimensions — the latter is sometimes called 3D NAND. As you’d expect, a device that requires such precise operations and density is more expensive to manufacture than traditional hard drives.

NAND flash’s complexity means that it is expensive to manufacture.

Manufacturers have come up with ways to combat flash memory’s high cost, though, with the most common technique being the use of multi-level cells. Instead of storing a single 0 or 1, triple-level cells (TLC) and multi-level cells (MLC) can store two, three, or more bits. While this strategy improves storage density and reduces manufacturing costs, it also has a negative effect on speed and durability. Still, the cost-benefit means that most consumer-grade storage devices today use TLC or MLC-based flash memory instead of single-level cells (SLC).

What are the technology’s limitations? 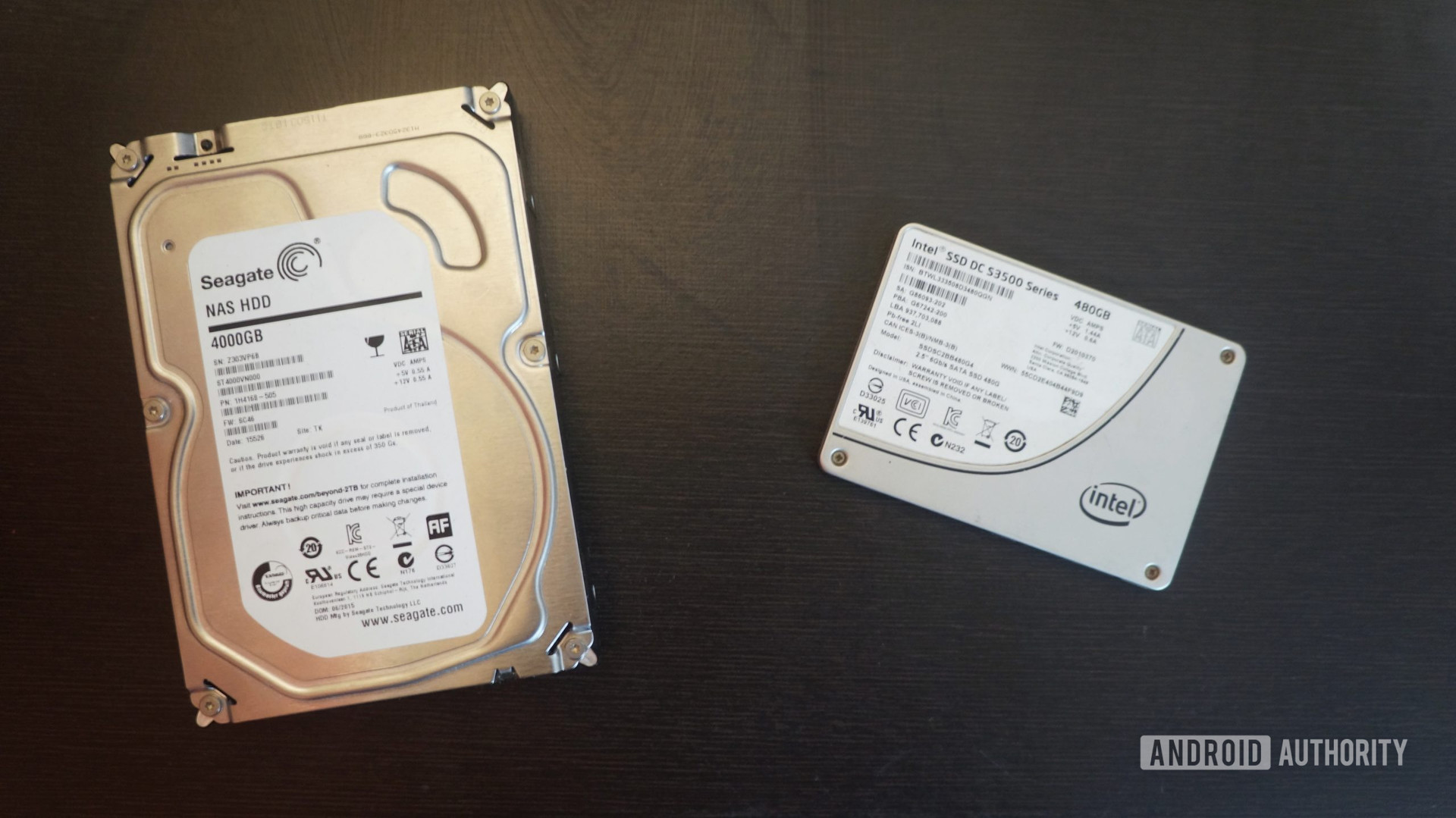 Flash storage has become the standard for compact electronic devices these days, but the technology is far from perfect. Besides high prices, which we’ve already discussed, flash memory can suffer data degradation or bit rot over time. If stored in an unpowered state for several years, memory cells can suffer from electron leakage and, eventually, data loss. While hard drives can also suffer from bit rot, they typically last a bit longer when powered down.

A bigger issue with flash storage is write endurance, or program/erase cycles. In a nutshell, it refers to the amount of data you can write before the memory cells eventually wear out. Generally speaking, the more information you squeeze per memory cell (TLC and MLC-type drives), the worse the endurance.

Flash storage suffers from limited endurance — it can only survive a limited number of rewrites.

Storage device manufacturers typically guarantee a drive’s lifespan up to a certain usage point, quoted in TBW or total bytes written. The 1TB variant of Samsung’s 860 Evo SSD, for instance, has a quoted endurance of 600TBW. A drive may still work beyond its rated TBW — just don’t expect any warranty from the manufacturer. Higher endurance drives typically cost more — especially those designed for enterprise use.

Finally, flash storage still can’t beat hard disks in terms of capacity. Most consumer SSDs top out at 2-4TB, while you can easily buy hard disks that exceed 10 or even 15TB at the same price point. This may change at some point in the future, but for now, hard disks reign supreme for archiving large amounts of data.