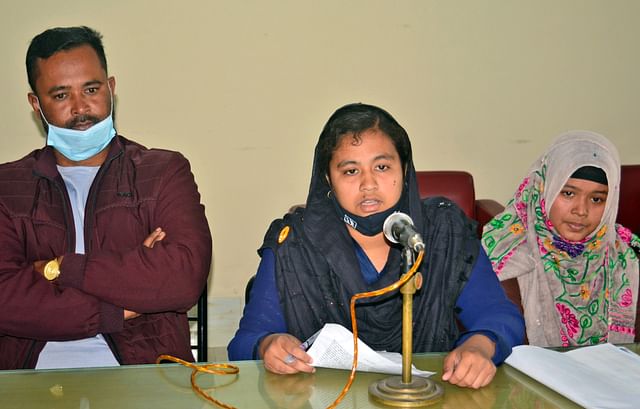 Bogra’s Gabtali Upazila Sukhanpukur Union Parishad (UP) election independent chairman candidate Ashraful Haque (55) has been accused of continuing the matter after being killed in an accident.

Afroza Sultana Geeti, the eldest daughter of Ashraful Haque, made the allegation at a press conference at Bogra Press Club on Saturday. He also alleged that the then Officer-in-Charge (OC) of Gabtali Model Police Station Zia Latiful Islam chased him away after using obscene language while he was going to file a case against the accused.

The deceased was identified as Ashraful Haque, vice-chairman of the proposed committee of Sukhanpukur Union BNP and former organizing secretary of Nepaltali Union BNP. His home is in Daur village of Gabtali upazila.

Another independent chairman candidate Shahadat Hossain, jealous of his father’s popularity as he was contesting for the post of chairman in the UP elections, planned to assassinate him. He then handed over the money to Selim Mollah, a close associate of his father, to clear the election field. At first, he obstructed the propaganda in various ways. He later made a final plan of assassination. On the day of the incident, January 26, Baba went to Bogra to attend a meeting on election law and order.

At the end of the meeting, he accompanied his close companion Selim Mollah to see an eye doctor in Bogra. On the way back to Gabtali on a motorcycle, Shahadat Hossain blocked his father’s way with three men on motorcycles. Among them Shahadat Hossain ordered his father to be killed. Selim Mollah immediately struck his father on the back of the head with a Chinese ax hidden inside his jacket. At that time, when the father tried to escape on a motorcycle to save his life, he fell on the side of the road at one stage. Doctors declared him dead after he was taken to Bogra’s Shaheed Ziaur Rahman Medical College Hospital. The killers later fled, but Selim Mollah, the mastermind of the killings, tried to call it a road accident.

However, denying the allegations, OC Zia Latiful Islam, who was recently transferred from Gabtali Model Police Station, said that the initial investigation did not find any evidence of Ashraful Haque’s murder. No one came to the police station to file a murder case.

Gabtali Upazila Election Officer and Returning Officer Ruhul Amin told Prothom Alo that the Election Commission has postponed the Sukhanpukur UP election on January 26 due to the death of chairman candidate Ashraful Haque.